To Hamburg and three matches in as many days. First up, on Friday night, the HSV-Werder Bremen derby, followed by rebel club HFC Falke on the Saturday and the old non-league grudge match between Altona 93 and Victoria Hamburg on Sunday.

The choice of so many games speaks volumes about a city which has football running through it like the great Elbe river. Water was to be a recurrent theme during the weekend, whether propelled out of police water cannon or falling from the sky on a chilly April weekend.

The water cannon, an evil-looking Wasserwerfer 10,000 model, was brought in by the polizei to halt a march by the Nordtribüne ultras before the meeting with their hated rivals from Bremen, the home of Becks beer. The Werder ultras had already been corralled on the motorway and sent home, leaving their Hamburg counterparts to face the hoses on their own, tossed around like rag dolls by the high-velocity jets. 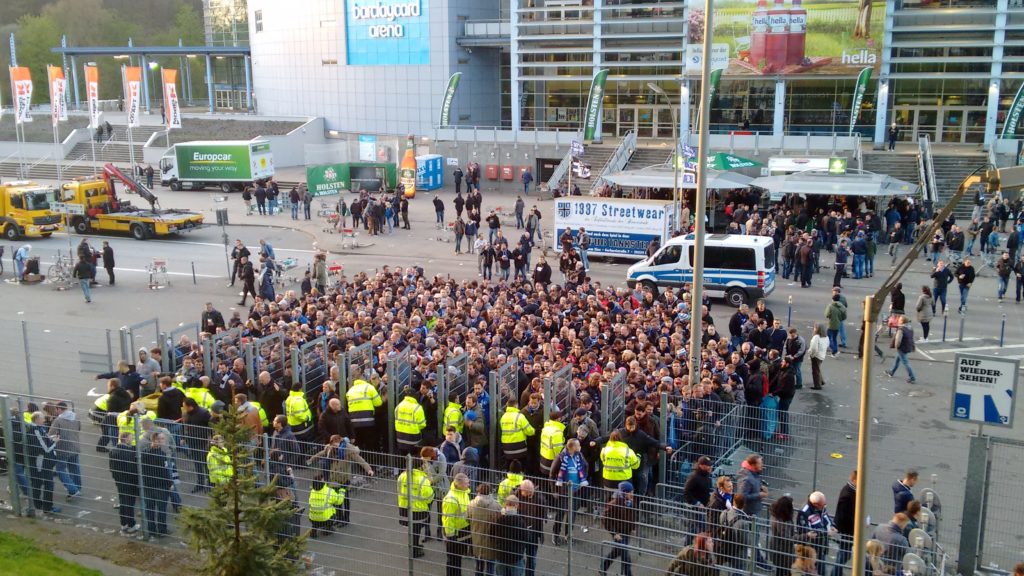 Sensibly, most of them decided to disperse and head to the Volksparkstadion to get stuck into the serious business of pre-game beers before taking in the match under the floodlights. I joined a few of the more lively Hamburg fans at the Tankstop mobile bar just outside the Stellingen stadium train station. The ground is a ten-minute walk through graffiti covered tunnels, with the atmosphere building as the 57,000 crowd approached. Hamburg’s stadium is an impressive beast and, as the sun set, the expectant chanting of the HSV hardcore began to rise.

The giant home terrace bounced at kick-off while it was organised chaos in the side sections with fans testing the idea of ‘safe standing’ seats. Although a no-booze zone, people sipped from hip flasks and passed around cigarettes to calm the nerves. The early match skirmishes were tense as both teams played in the one-paced, technical German style. It was proper English wing work though which eventually provided both Hamburg goals, with a teasing Matthias Ostrzolek cross dropping plum on the head of Pierre-Michel Lasogga for the striker’s crucial second goal on 32 minutes.

Hamburg started just three points above their rivals in the relegation play-off place so, needless to say, the Volksparkstadion now measured on the Richter scale. After going two goals behind, Werder came back strong in the second half but Hamburg were saved by stand-in goalie Jaroslav Drobny who repelled a weak penalty from 37-year-old Claudio Pizarro. “He’s a good boy Drobny,” said a HSV ultra, not describing the Czech’s performance but rather his alleged ability at downing pints in the fans’ bar. 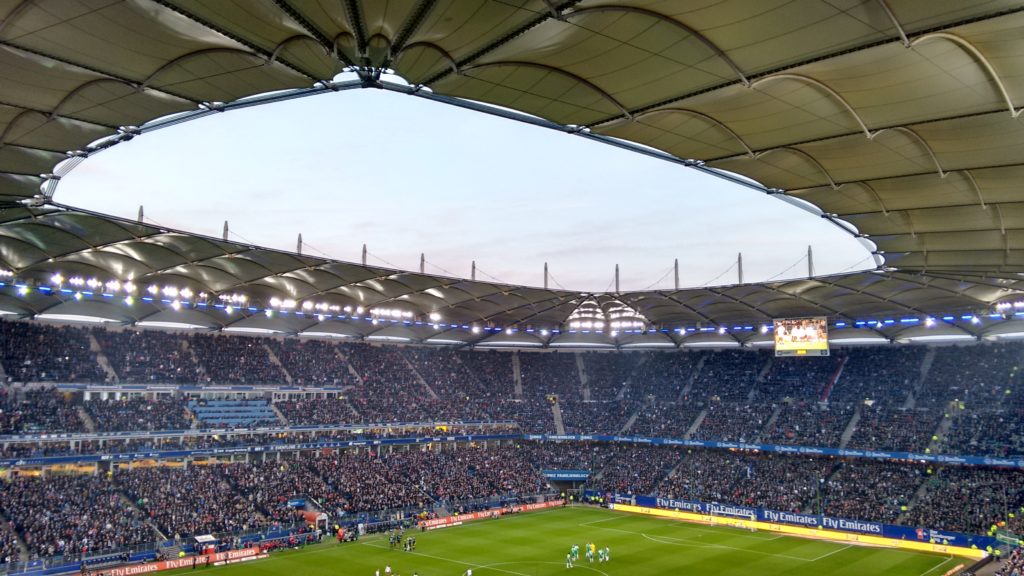 “We need more hate, more kicking,” said the Hamburg supporter, offering me a fag after Anthony Ujah had bundled home for Bremen. There was to be no equaliser as a past-his-best Pizarro sent a last-gasp header beyond the post.

Now the home fans could party, breaking into their ‘Sechs mal Deutsche Meister’ anthem, which proudly celebrates being ever-presents in the Bundesliga. ‘Super Hamburg Olé’ was still ringing in my ears as I woke up nursing a stonking hangover following post-match beers and vodka at the Tankstop.

The match at HFC Falke was cancelled because, in true Sunday league style, their opponents couldn’t raise a team. Falke are the off-shoot club of HSV – much like FC United of Manchester in hating the commercialisation of the ‘big club’ – and are champions in the ninth tier in their first season after formation. One hundred per cent fan owned, Falke, run by former HSV die-hards, have stripped football to its bare essentials, creating a welcoming supporter experience at their beautiful Rudi-Barth Stadion that they share with Union 03. Welcoming apart from the cancellation, of course.

Despite having no match, the Falke fans celebrated their promotion late into the night. They will no doubt face issues as they rise through the leagues and sporting virtues conflict with financial demands but, for now at least, this little outpost offers as pure a football experience as you’ll find. 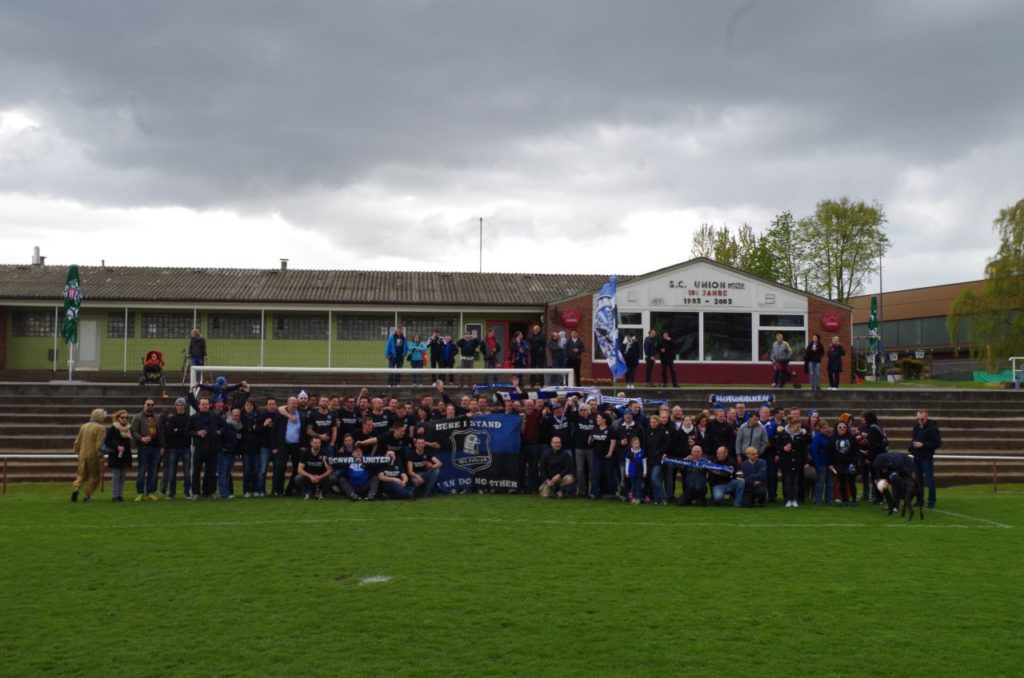 Luckily, Altona 93, the non-league club with Danish roots who play in the German fifth tier, could muster some opposition on a freezing Sunday afternoon. Hearts are always warmed at Altona, in the West of Hamburg, by the pre-match DJ spinning ska and reggae tunes on vinyl and with local Astra beers at only one Euro a pop.

Altona have a left-wing attitude but politics rarely came into the day where we picked up a top-notch ‘All To Nah’ fanzine with supporters enjoying a relaxed atmosphere far removed from the tense nature of the HSV-Bremen tussle.

This was still a derby, however, and one of the oldest rivalries in Germany between Altona and Victoria Hamburg. But it was a beautiful thing to see that socialising in the stands seemed as important as events on the pitch. Altona’s Adolf Jäger Kampfbahn ground is all grass banks and ramshackle terracing, and all the better for it.

The weather changes in Hamburg quicker than the ball changed possession in Altona’s scrappy 1-0 victory. As the strange April snow set in and conversation between fans from all over the city flitted between this and that, there was time to reflect on a great football weekend. Hamburg is never perfect, but football here is more like it’s meant to be, close to its roots. After the match I was dancing to the Specials, and I haven’t danced for years. 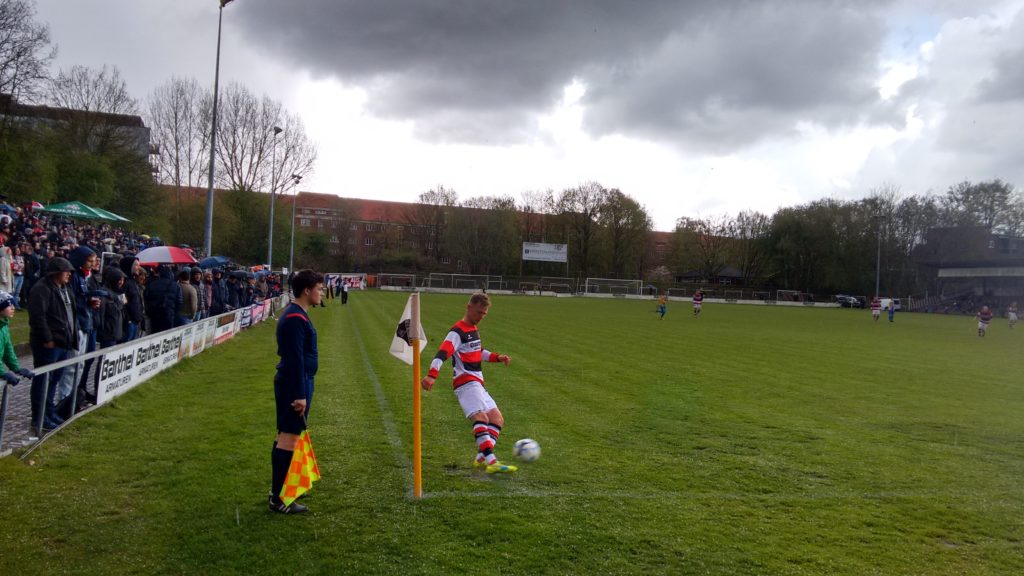 Flights: EasyJet flights from Edinburgh, Manchester, London Luton and Gatwick average around £30 each way and are usually under two hours.

Getting around: Hamburg has a decent public transport system including an underground. Take the following S-Bahn trains from the central station to:

Tickets: Ticket prices for HSV range from €16 for a standing place to €94 for the posh seats at top category matches. Check out the club website for more details.

European Football Weekends: From the Bundesliga to the 9th tier in Hamburg
5 (100%) 18 votes