“I stopped the game. At that point, Astengo had the ball out wide, and I headed off to see what was going on. As I was getting there, because I was 50 metres away, I got the feeling that the flare hadn’t hit Rojas. But I couldn’t be sure. It struck me how the players were all quickly running towards him. So I couldn’t see clearly what was going on. All I could see was a red-coloured stain, but I wasn’t sure what had happened. I said to the Chilean players to let me see him, so that he could be attended to. They refused” – Juan Carlos Lostau, the referee in charge of Brazil vs Chile, 3 September, 1989.

When the Brazilian football federation announced in July that the national team’s final World Cup qualifier would be played at the Allianz Arena in Sao Paulo, rather than the iconic Maracanã Stadium in Rio de Janeiro, opponents Chile could be excused for breathing a sigh of relief. A little over 28 years have passed since the Chileans last travelled to Brazil for the final game of a World Cup qualification campaign, yet the events of 3 September, 1989 still cast a shadow over the country’s national sport.

As with Tuesday’s fixture, the pressure was on Chile to secure a result. They went into the game knowing only a win would be enough to qualify for Italia ’90. In the 69th minute, losing by a goal to nil, goalkeeper Roberto Rojas collapsed to the ground with blood pouring from a head wound. Near to him lay a flare, apparently thrown by a Brazilian fan in the crowd. The Chilean team rushed towards Rojas and carried the goalkeeper off the field in protest. Refusing to return to the field of play, they gave referee Juan Carlos Lostau no option but to abandon the match.

Suspicions grew over coming days as to the authenticity of Rojas’ injuries, and soon Argentinian photographer Ricardo Alfieri published images showing that the flare had in fact landed yards from where the goalkeeper was standing. A week later, Rojas was given a life ban from professional football by FIFA. Several other figures in the Chile national team setup and football association were also punished. Brazil were awarded a 2-0 victory, eliminating Chile from the 1990 World Cup. The Chileans were also banned from entering the qualification tournament for USA ’94.

Rojas later confessed to hiding a razor blade in his left glove, which he used to inflict his injuries. The plan had been hatched in the lead-up to the game at the Chilean training camp. Knowing that no Chilean side had won away to Brazil in a competitive match, it was apparently decided, at the first signs of provocation from opposition players or fans, that the team would leave the field of play in order to force a replay at a neutral venue.

It is uncertain exactly who was aware of Rojas’ plans. Defender Fernando Astengo was suspended by FIFA for his part in the plot, but protests his innocence to this day. In 2013, he told Chilean television: “It was in the changing room when I realised that it was all false. There were a few of them who staged what happened in the Maracana. I believe that, apart from Roberto, there were six others, players included.” Rojas has always maintained that he acted alone.

The incident is still one of the most shocking in World Cup history, a potent blend of the raw violence of Zidane’s headbutt and the wilful deception of Maradona’s Hand of God. Looking back nearly three decades on, the images of the flare streaming smoke into the balmy night sky as blood drips from Rojas’ head are as powerful as ever. We will almost certainly never see the likes of it again. In the modern era of multiple camera angles and smartphones, it would take courage to the point of stupidity to attempt anything similar.

Yet if Rojas’s deception was only possible because of the era in which it took place, it was also very much a product of its time. In 1989, Chile was wearily coming to the end of seventeen years of rule under a military junta led by Augusto Pinochet. The years of dictatorship had left scars on every area of Chilean society, and football was no exception. A dangerous, win-at-all-costs attitude had taken hold of the national game. Various journalists have drawn a line between the moral decay of society under Pinochet and the collapse in behavioural standards of Chile’s footballers.

Daniel Matamala, for example, the author of a political history of Chilean football, blames the country’s sports authorities of the time for “endorsing this feeling that we had to do whatever it takes to win”. The national team was encouraged to play dirty and use underhand tactics. “At that time, it was thought that Chile lost because we weren’t ‘streetwise’ enough…and we all know where that attitude ended up leading us.”

The first major warning sign of this ruthless approach to competition came in 1979. That year, it was found that the passports belonging to a number of the Chilean players who had travelled to Uruguay to compete in the South American U-20 Championship had been doctored. Of the 20-man squad, only three were legally young enough to take part in the tournament.

Placing the scandal in its historical context, football journalist Danilo Diaz once told me: “It was very related to what was happening in the country, with the dictatorship. It was the atmosphere: if they disappear people, torture people, assassinate them, send them into exile, then why not doctor the passports for the Under-20s in Uruguay? It was all relative.”

One of the players involved in the passport scandal was Rojas. He later admitted: “We all knew that the passports had been falsified. And when I say we all knew, I mean the management, the players and the coaching staff.”

Ten years down the line, Rojas’ disregard for the rules remained as strong as ever, as he became the key protagonist for an even more brazen act of cheating at the Maracana. As journalists Carlos González and Braian Quezada conclude in A Discreción, a book on Chilean football during the dictatorship, “what happened on that evening in 1989 was simply the culmination of an era of Chilean football in which sporting values and fair play mattered little or not at all.” 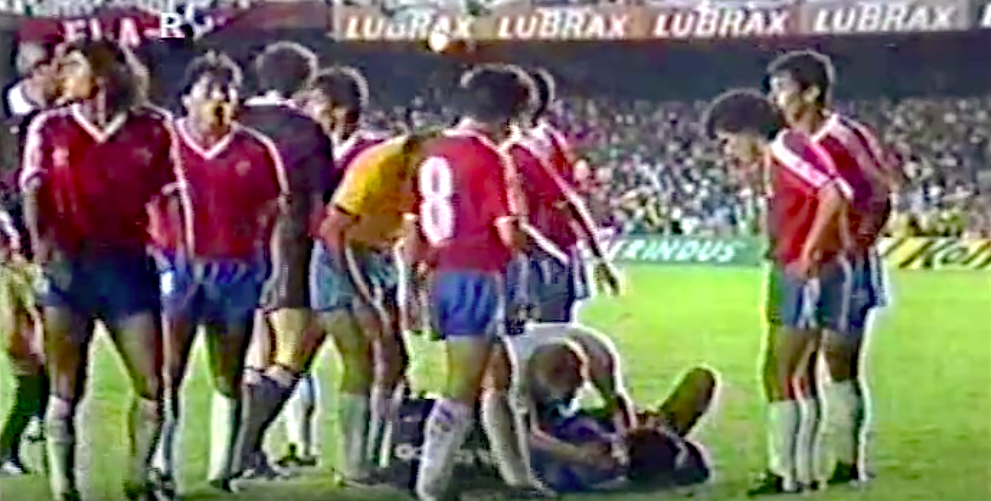 Whatever happens in their match in Sao Paulo on Tuesday, Chile’s name will not end up being dragged through the mud like it was in the days, months and years that followed that infamous night at the Maracana.

As a country, Chile has moved on since 1989. It is now a stable democracy boasting one of South America’s strongest economies. The identity of Chilean society is no longer defined by fear and distrust. When one of the country’s biggest newspapers, La Tercera, wrote about the 25th anniversary of the Rojas incident, the title of the article neatly summed up the attitude of modern Chile towards what took place that evening: ‘Eternal shame’.

Ask a young Chilean football fan about the Maracana now, and they are more likely to talk about 2014 than 1989. Chile overcame their demons three years ago at the World Cup in Brazil, when they defeated reigning world and European champions Spain at the newly-renovated stadium in Rio. That result, more than any other, has served as a springboard for the current Chilean national side. Armed with the self-belief that the Spain result instilled in them, Alexis Sanchez and company have gone on to claim back-to-back Copa America titles.

Chile no longer play to win at all costs; they simply play to win. This week, the team once more travel to Brazil with their World Cup qualification hopes hanging in the balance. As they aim to secure their ticket for Russia by becoming the first Chilean side to win away to Brazil in a competitive match, they will be hoping for another night that lives long in the memory. Only this time, for all the right reasons.

This article was originally published on 9 October 2017.