If you were in the business of stereotyping, to look at Taylor Hitchcock you’d see her tracksuit, you’d see her grin and you’d admire the intricacy of her multiple hair braids – and you’d assume she was just another football coach.

In a way, she is; currently Hitchcock is coaching the England women at the 2016 Homeless World Cup in Glasgow, competing against 15 other teams for the trophy.

But not so long ago, she was living in a hostel – until football changed her life.

One of the hostel’s support workers – a Tottenham fan – knew how much Aston Villa supporter Hitchcock loved football, and when she spotted a leaflet for the Street Soccer programme, she suggested it.

Hitchcock signed up – and even better, spent six weeks at a Villa training centre in full Villa kit. Her progress there was so good that she was called up to the England squad for the 2014 Homeless World Cup in Chile.

“It was amazing, probably the best experience of my life,” she recalls. “It’s hard to describe because of how amazing it was. I saw so many people, so many things; it changed my perspective on my life completely. It made me so grateful for the life I have and the people in my life – I met people with absolutely nothing. It was quite emotional.”

Players can only compete at one Homeless World Cup. The idea is that those who participate in street soccer programmes are rewarded for their progress and commitment – not necessarily their footballing skills – by playing on the world stage, but after that they should be moving on to the next step of rebuilding their lives.

In England, the programmes are run by the Street Football Association, a merger between the Homeless FA and housing charity Centrepoint. They partner with football clubs to run year-round programmes to support people experiencing homelessness and other forms of social exclusion, building their confidence through the transformative power of football.

“We are not a patronising outfit,” says Gareth Parker, chair of the Street Football Association. “It’s about inspiring change in individuals and convincing the football sector that it’s not just enough to kick a ball about – more needs to be done for these amazing players to transform their lives.”

“I love coaching, I love interacting with young people, especially the ladies,” she beams. “My team are amazing, they’re so great – that makes it a lot easier when you’ve got an amazing group of players.”

Of course, their shared experiences of social exclusion make for a very special bond between coach and players.

“When they’re down, I know exactly how they’ve felt because I’ve pretty much been there or been even lower,” she says. “They inspire me but I also inspire them, which is great – we can build together.” 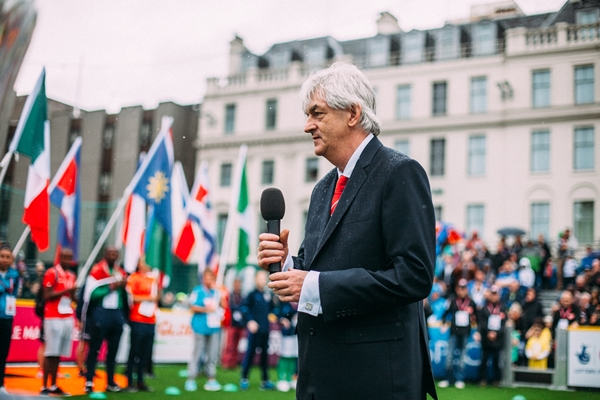 Homeless World Cup founder Mel Young is delighted that so many former players are still involved with the tournament as coaches, managers and referees.

“Maybe they’re at the end of the process [of the inclusion programme] and maybe they’re thinking, ‘OK, I’ve got the [Homeless World Cup] medal, but what do I want to do?’” he says.

“A lot of them want to stay in sports, because they like sports – it’s natural. So you can get a Level 1 coaching certificate, you can build it up. They’re very positive people to have as leaders because [the players] will say, ‘Oh, you don’t know what it’s like,’ and they’ll say, ‘No, actually, I do, I was in your place, and now look at me.’ These are important ways out.”

The first Homeless World Cup was held in Graz, Austria, in 2003; the Glasgow edition is the fourteenth. It grows every year, with 52 countries involved this time round; George Square in the city centre has been transformed with three astroturf pitches and small stands constructed around each of them.

The matches are four-a-side, and are seven minutes each way with one minute of half-time; if there’s a draw, it goes to a penalty shoot-out. It’s rare that happens – the games are so fast-paced that usually the goals are flying in.

It gives Young, a genial Scotsman, a mixed kind of joy to see the development of the tournament and the support it has been given by the city and by the Scottish government.

“It’s absurd that we’re here. Just absurd,” he says. “Our ambition is not to exist because there shouldn’t be homelessness in the world – but there’s huge problems.

“Where there’s homeless people we’re happy to be there, because we’ve found something that works. So tell everybody. Spread the news.”