Hamburg and Werder Bremen really don’t like each other. To their fans, it doesn’t matter that they’re separated by 76 miles, further than it is from London to Portsmouth. Nor does it matter that neither of them are exactly at the peak of their powers.

That actually increased the significance of Friday night’s Nordderby (North derby) with Bremen, positioned in the Bundesliga’s relegation play-off spot in 16th, having the chance to pull level on points with Hamburg and therefore drag them right back into the mire.

Even without that juicy bit of narrative, Hamburg against Bremen comes only after Dortmund against Schalke in the pecking order of German football’s fiercest rivalries. Such occasions then are best experienced with the supporters, so a big step was taken outside the cosy press box world of free sandwiches and coffee to join Rob, a fellow European football fan, who had snagged two tickets.

The journey to the ground was interesting. It turns out that when you’re walking through a tunnel and you’re five metres away from a flare when it explodes, it’s quite loud. The other red flare that didn’t explode was pretty bright too but, then again, they do burn at the melting point of steel.

This was only after being pressed up against hundreds of Hamburg fans on the train to Stellingen, the nearest station to the ground. No chance then of anyone checking your ticket, but even so, it is a nice quirk of the Bundesliga that match tickets double up as a free return pass to the stadium on regional trains.

Instead of ticket inspectors, chants of “Scheiss Werder Bremen” went round the carriage – and yes, that means exactly what you think it does. That merry tune also serenaded our arrival at Stellingen as we turned right out of the station and dropped into UnabsteigBAR – an important pit-stop en route to the ground.

It’s the unofficial pre-game bar of choice for many Hamburg fans, visible by the countless blue scarves which adorn its interior. Like the club it represents, it has a rickety touch to it too, such as the hand dryer hanging off the wall in the gents’.

Whoever came up with the name deserves credit. Unabsteigbar means “unrelegatable”, which encapsulates Hamburg’s fierce pride at being the only Bundesliga side present for each one of its 53 seasons to date. 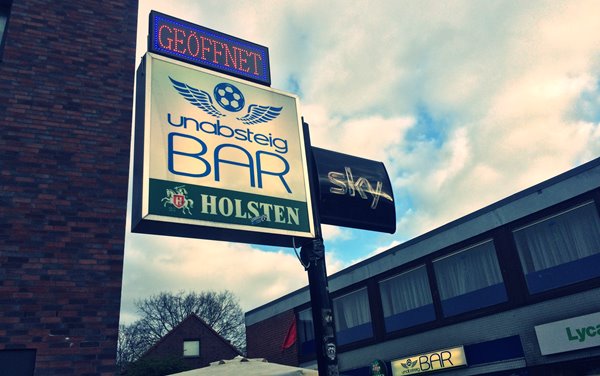 It was wandering into Unabsteigbar’s concrete beer garden that we encountered Henrik and his friends, a group of Hamburg fans in their early 20s who also like singing “Scheiss Werder Bremen”. For Henrik, the rivalry is about history – and recent times haven’t been kind to Hamburg.

Bremen have made a habit of beating their arch-rivals in their own backyard when it really matters. Ten years ago, they came to Hamburg and won on the final day to pip them to an automatic place in the Champions League group stages.

Then, in 2009, Bremen visited Hamburg twice in the space of 16 days. The first game saw them go through to the DFB-Pokal final and the second saw Bremen make it into the UEFA Cup Final where they lost to Shakhtar Donetsk in extra time.

No wonder then, with these painful memories, that Henrik was worried about the game. He seemed to combat this fear by drinking a fair amount of beer. Alcohol was banned inside the stadium for just this game, so perhaps it was necessary to consume a little more than usual beforehand. On the other hand, perhaps not. 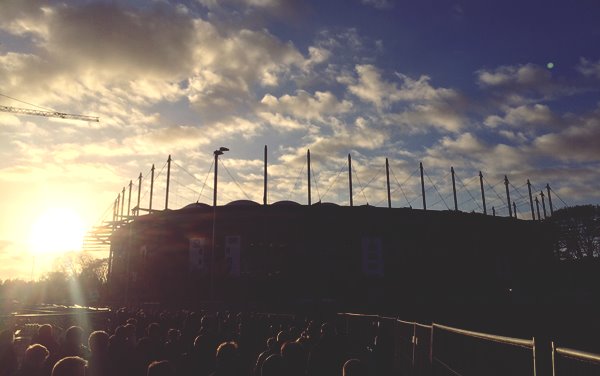 The Volksparkstadion was where Rob and I headed to next, through the woods and through the occasional flare-filled tunnel. There we got a very good perspective of the game from a Bremen point of view because, as it turned out, our tickets were high up in the second tier of the away end.

It wasn’t quite as boisterous as you might have expected, but the way the game played out muted the atmosphere. A bad mistake by Chelsea loanee Papy Djilobodji – Jose Mourinho’s unwanted man – allowed Hamburg’s Pierre-Michel Lasogga to put the home side in front after five minutes before he doubled their advantage just after the half-hour mark.

As you’d expect, the Bremen fans really weren’t happy with that, particularly the moustachioed figure standing to our left. He volleyed some abusive words in the direction of a mother and son sitting in the row in front. They were both Hamburg fans who stood up when Lasogga scored the second, which admittedly wasn’t the brightest idea. The good Samaritan in me wanted to interject, but the rest of me wanted to get out alive.

The guy to our right was a little friendlier, if not still fervent in his passion for Werder. He told us he studies in Bremen and goes to every home game; the atmosphere on Friday was lacking in his opinion, not only because of the scoreline but also because most of the Ultras hadn’t yet arrived.

The previous weekend they had been driving on their team by singing Oasis’ Wonderwall before kick-off. They’d done that for the first time back in pre-season at West Ham but the reason why they picked that particular song is still unclear.

What did become clear the next day, though, was why they didn’t all make it to Hamburg. National tabloid BILD revealed that the Werder Ultras had been stopped on the motorway, carrying firecrackers and pepper spray amongst other items. 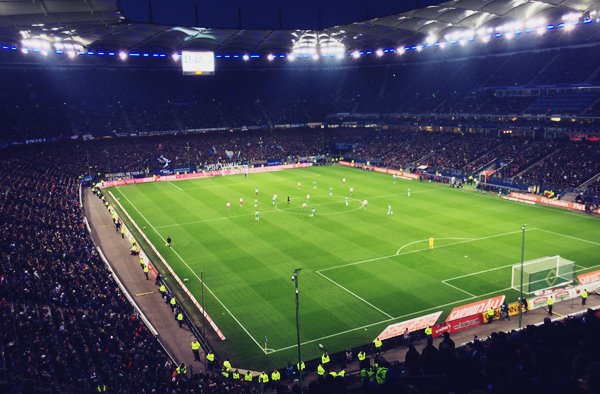 Their mood probably wouldn’t have been improved by their team’s performance. It took until the second half for Bremen to awake from their slumber. Yet even when they did, club legend Claudio Pizarro was denied from the penalty spot by Hamburg goalkeeper Jaroslav Drobny.

Substitute Anthony Ujah eventually pulled one back to make it 2-1, causing the Hamburg fans to endure a nervous final 25 minutes. In the end those nerves made the relief all the more palpable in their celebrations at full time. They’re all but safe from facing a third consecutive relegation play-off, having moved six points clear of Bremen with three games to play.

What’s more, for the first time in 48 years, Hamburg had beaten their arch-rivals home and away in the Bundesliga. “Niemals Zweite Liga!” (Never second division!) roared their fans over and over whilst the Bremen supporters slinked off into the night.

The stadium’s Nordtribüne is where the club’s famous old clock sits, showing how long they’ve been in the top flight. As the Hamburg players bounced up and down with their fans, it ticked on. They remain “unabsteigbar”.

Flares and loathing in the Bundesliga: The bitter rivalry between Hamburg and Werder Bremen
4.6 (92.86%) 14 votes