Throughout Euro 2016 we are serialising Rob Fielder’s marvellously comprehensive book, The Complete History of the European Championship. The series will look at the 10 greatest matches in the tournament’s history, recalling the events around the games and many of the wonderful players who have graced the competition over the years.

The Euro ‘84 semi-final between France and Portugal has gone down as one of the most enthralling matches in the history of the European Championship, but there was little in the build-up to suggest such an even contest. With the game being played at the Stade Vélodrome in Marseille there was an exuberant atmosphere of expectation. The fans, and many of the players, came with the anticipation of a procession for the home side, and few fancied Portugal to put any genuine obstacles in the way of Michel Hidalgo’s men.

The major change to the French side was the inclusion of Yvon Le Roux at the centre of defence as Hidalgo moved Luis Fernández into midfield and sacrificed Dominique Rocheteau for greater security at the back. Perhaps that reflected the danger Portugal had shown going forward in their decisive group victory against Romania and here Diamantino was selected as the man to support Jordão in attack. Yet the manner in which the French had won their three group fixtures, and the lack of obvious stardust in the Portuguese line-up, made this look like a potentially one-sided affair.

Sadly the opening stages of the game lacked any fluency; the referee’s frequent interventions for a series of minor fouls disrupting any early rhythm. With roughly a quarter of the match played one of these free-kicks became significant. Awarded for a foul by Frasco on Michel Platini just outside the penalty area, most expected the French skipper to take the set-piece. Among those might well have been Manuel Bento but, with Platini still moving gingerly, up stepped Jean-François Domergue to lash the ball into the top corner. It was a wonderful gift on the full-back’s 27th birthday.

The remainder of the half continued to disappoint. Luis Fernández had a goal disallowed for offside after some magical approach play from Alain Giresse while Jordão blazed over from Portugal’s best opportunity. The early minutes of the second were in stark contrast. France began to look far more like the team who had scored so freely in the group stages as they laid siege to Bento’s goal.

A fine through ball from Platini allowed Fernández to exploit a misfiring offside trap but his first effort was saved by Bento and the second was put wide with the open goal gaping. Later Giresse picked up possession from Jean Tigana and launched a swerving rocket which Bento did extremely well to keep out. The keeper was again the hero when Platini ran through from Didier Six’s pass and fed Giresse, whose timid shot was denied again by Bento. It seemed it was just a matter of time before France would score again when Giresse thumped a volley wide of the post and then a beautiful sweeping move ended with Platini drilling another effort at Bento.

With French pressure so intense the match suddenly changed. Les Bleus were hopeless in trying to deal with a corner and it required Fernández to clear off the line before Jordão headed over from close range. That should have provided the warning signs but soon after disaster struck. Chalana supplied the cross this time and Jordão, totally unmarked, was able to exploit such woeful defending to head his side level.

Still the home side could easily have won it in normal time. A Giresse through pass found Platini but Bento was again out quickly to block; as the rebound fell to Six his powerful strike was deflected by Bento onto the bar and over in a moment of inspiration. Platini also came close with a free-kick which ricocheted off the wall and over. 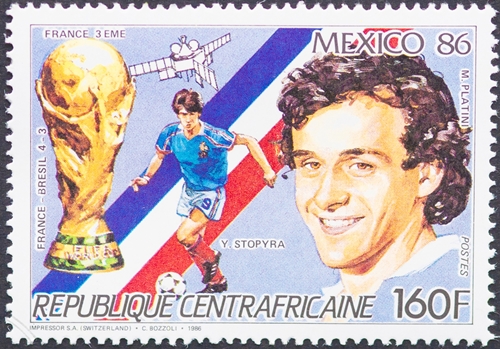 Extra-time saw the goalkeepers come to the fore. Ferreri’s low cross found Platini who managed to hook the ball on the slide, only to see Bento tip it over the crossbar. Bats was equally decisive as he made a terrific save to deny Nené’s header after João Pinto had supplied a cross from the right. Fresh from that the Portuguese attacked again. Chalana engineered space for a deep centre which picked out Jordão whose volley flew into the ground and bounced up over Bats who was cruelly beaten. It was a goal that was totally unintended – indeed he could have tried 100 times and never repeated the strike – and yet now France were on the brink of elimination.

Things might have got worse for the hosts. Had Bats not denied Nené after Chalana’s clever pass it would all have been over but instead they survived. When the second half of added time started French confidence seemed to have returned. Platini went down in the area but nothing was given. Soon after they got their reward as Le Roux’s blocked shot fell to Platini; he turned and when the ball ran for Domergue the full-back scored his second of a remarkable match.

By now the game was frantic, with no discernible formation to either side’s play. Each team took it in turn to attack and France might have snatched the lead through Bruno Bellone’s misplaced cross which Bento only just kept out. Still though the French believed they could win it. A surging run from Tigana took him past three defenders before the Mali-born midfielder pulled the ball back for Platini. As the French captain received it on the edge of the six-yard box he might well have thrashed a wild effort over in the heat of the moment. But not Platini. Instead he had the composure to take a touch and then blast his shot into the roof of the net, giving Bento no hope.

France had recovered to win one of the most pulsating matches in history and they yet again owed their inspirational number ten an enormous debt of gratitude.