6 Light and breezy for social gamers.

“Everything is a game,” says Jose Mourinho enigmatically on the heavily rotated TV commercial for Top Eleven. Bobbins. Doing your own tax returns. That’s not a game, Jose. It’s a bleeding nightmare. Emergency surgery. You treat that like a game and you’ll be handing in your scalpel before lunch time. Top Eleven is a game though. A game wading purposefully out into waters dominated by one very big fish.

It’s impossible to discuss a football management game without first looking to Football Manager. It dominates the genre like no other game in gaming history. And yet it is not infallible. As real life takes increasing priority for maturing managers, they drift away, craving something lighter, more portable, maybe even more relaxing. So is Top Eleven their ‘replacement’ patch? Probably not. But that’s not necessarily a bad thing.

This isn’t really like Football Manager. For starters, there are no real clubs, player names or leagues. Secondly, this is not a game for a long train journey. You can’t just sit down and clatter through the campaign to your heart’s content. This a real time game with scheduled fixtures. It’s designed for frequent tweaking rather than binge coaching.

Generally, you’ll have a match every actual day, sometimes two, but there’s no guarantee of convenience. Some matches are set for the early hours of the morning, others for late at night. If you’re not there, the AI will take over. I only ever saw one of my matches. Not that witnessing it brought much in the way of reward. The information on display isn’t much more detailed than the sort of thing you would have seen on your Commodore Amiga in the 1990s.

But in the context of the game, it doesn’t really matter. Top Eleven isn’t a challenger to Football Manager, it’s more like a challenger to Theme Park. The focus is on long term club development rather than match-by-match progress. As well as trying to win games, you’ll also be looking to carry out stadium improvements, to sign sponsorship deals, to train your players and to create facilities that will maximise your income.

The game runs on an internal currency of dollars, garnered from gate receipts, among other things, and also tokens, earned through in game challenges and sponsorship deals and required for anything from bidding for players to hurrying up construction projects. Top Eleven is free, playing it is free, tokens can be earned for free, but the game is going to be far, far easier if you spend real money on in-app purchases. This alone will be enough to make some would-be players run for the hills. 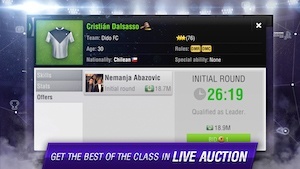 There are some flaws too. The lack of post-match highlights or analysis options can make it difficult to understand where your team went wrong. For the life of me, I couldn’t buy a player. Every bid, the fee arbitrarily set, costs a token, but auctions end at times as random as your matches. If you’re not there to supervise, you’ll almost certainly lose out. Other problems include the lack of individual attributes for goalkeepers. Having trained my keeper up, I was a little dismayed to find that the benefit was a small increase in his heading ability.

So why hasn’t this football management game, so inferior to Football Manager, been panned? The multi-player aspect helps. The game links directly to your social media account and you can bring your real life friends onboard for friendlies. You can’t set up your own leagues, however, due to the internal ranking system that would give experienced players an unfair advantage.  The game is also improved immeasurably by the fact that it transfers over devices, so that you can deal with training on your computer in the office, and then keep an eye on a player auction on the bus with your phone.

And there is a lot of satisfaction in building your club up slowly. Very slowly, given that it takes a number of actual days to install some new seats in what passes for your ‘stadium’ at the start of the game. But it’s pleasant to log on, tell your players to do some stretches, re-assign some skill points and then log off five minutes later. It’s a little bonsai tree, a snip here, a snip there, just something to clear the head at lunch time.

Top Eleven really is, as Jose told us, a game. And a cute one at that. Football Manager on the other hand, is a simulation. And herein lies the difference.