I’ve been playing computer games since 1983 on every format from the ZX Spectrum to the Playstation, but I’ve never been able to get on with iPad games. Not the exciting ones anyway. Turn-based strategy like Rebuild? Excellent. Limited ‘set-piece’ sports games like New Star Soccer? Not a problem. But anything that involves a virtual joypad on the side of the screen floors me. I can’t even play Minecraft on my Kindle Fire because my unwieldy sausage fingers can’t cope with it all.

For this reason, I didn’t ever expect to find a proper football game that I’d be able to play for more than three minutes without hurling the iPad at the wall and howling at the injustice of it all. But Tiki Taka Soccer feels like the first step towards a happier, calmer future. It’s a genre-buster, an inventive, intuitive and smart solution to the problems that dog the traditional football simulator on this format. It isn’t quite there yet, but you suspect that it won’t be long before it is. 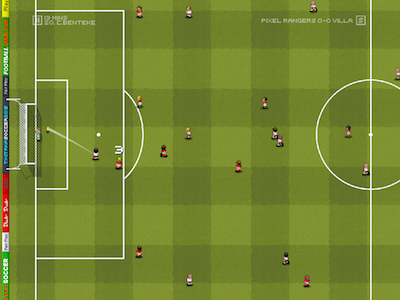 There are shades of NSS here in the control system and heavy influences of Sensible Soccer in the size and perspective. Controls are minimalist. If you have the ball, tap on one of your team-mates to pass it to him. If you don’t have the ball, tap on the bloke who does and your player will trot over and attempt to tackle him. When you’re ready to shoot, skid your finger across the pad at the goal. Add a bit of swerve, if you like. Because you can see so much of the pitch at once, you can look for runners and plan your attacking moves. Or you can just twat it long and hope for the best. Both strategies have their advantages.

Learning the controls is one thing, being able to use them properly in the middle of a match is another. There will be frustrating moments early on when your player will gain possession and you’ll look around the pitch for a pass only to look back to your player to see that he’s already lost it. Activate your inner Scholes. Look for options before you receive the ball. Activate your inner Xavi. Make space with your first touch. Activate your inner Cleverley. Play a simple pass as soon as possible. 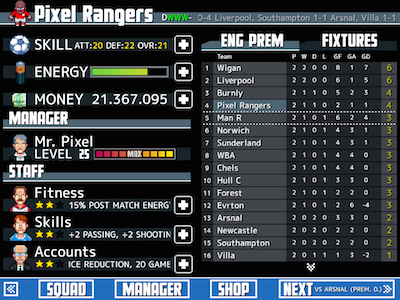 The career mode is excellent, offering you the chance to create a team and take them up the divisions. Just like Newcastle United, your team is absolutely rubbish, but very profitable. With every game, money pours into your coffers and you can spend it on energy boosts, new coaches, new players or even new accountants to make even more money. It doesn’t take long to build up enough cash to buy a star player and you really notice the difference when you do. When you start your career, your players will be incapable of running quickly, making long passes or hitting a cow’s bottom with a banjo. As you play more, your experience grows and better players appear on the market, along with new formations as well. You can speed all of this up with in-game purchases, but I didn’t and it didn’t hamper my enjoyment of the game one bit.

Getting to know your players is crucial. If their passing stats are low, for example, they’ll be a liability on the pitch. You’ll want to use them to make simple passes and leave your best players to make the big Xabi Alonso through balls. As in real life, your players’ attributes should determine your playing style. This means that you can specifically buy players to suit your needs, but more than that, it furthers the sense that your actions have reactions. The moment that you know a new version of Football Manager is one of the good ones is always the moment when you lose heavily, but blame yourself, not the game. Tiki Taka Soccer makes that same connection. You know what you’re doing wrong, you know why you’re not winning and you know how to change it. 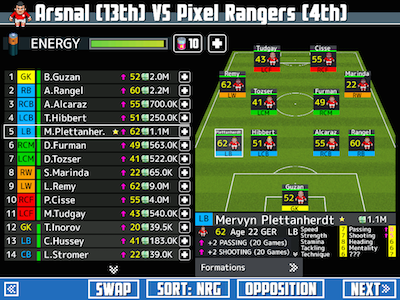 This is not to say that the game is flawless. The inability to move players off the ball is an annoyance. It would be nice to dribble into space while sweeping attackers into better positions, or sending a man to intercept a runner, while sending two more players back to cover. There are times when the opposition breach your lines and all you can do is watch. Perhaps some tactical sliders to move your line deeper would be a simple improvement. It would also be nice to edit player names, helping you to familiarise yourself with a new squad. But these are just quibbles.

It’s bold, it’s different, it’s fun and it’s free. What are you waiting for?

You can find out more about Tiki Taka Soccer here.

And you can read an interview with the game’s creator here.