The Red Lion is a rare beast indeed, a play about football. This is not ordinarily a topic treated within ‘serious’ writing or drama, but football nonetheless makes for a compelling backdrop to Patrick Marber’s bitingly funny, darkly tragic new work, currently showing at the National Theatre. It is a must-see for fans of the game.

Marber is a playwright who mixes insight and wit, and uses various themes, gambling in Dealer’s Choice, sex in Closer, death and religion in Howard Katz, all as a means of exploring our relationships and society as a whole. For The Red Lion, he turns to a subject with which he is very familiar: Football.

Marber is a director at non-league Lewes FC, a club that places significant emphasis on community ownership and engagement. Marber’s intuitive understanding of the schismatic world of lower league football, at once grubby and idealistic, is but one of the facets that makes this play so compelling and provocative.

The play is set in the home dressing room of a small, non-league club in a small town, a team dreaming of better days in the future and, in one memorable soliloquy, of past glories, a 1st round FA Cup tie described as if it were the last days of the Somme. The kitman Yates, who delivers this speech, creaks with age and burns with pride in the club, redolent of a past age of football where loyalty, decency, and a wider social purpose rooted clubs like his in the fabric of the towns to which they quite literally belonged. His antagonist in the current set-up is Kidd, a wily, geezerish manager with a disastrous personal life that has left him with financial troubles and a burning desire to advance his career and make a bit on the side. Into this almost too obvious juxtaposition comes Jordan, a young tyro who longs to play football as a means of forgetting a troubled past that reveals itself incrementally through the play. 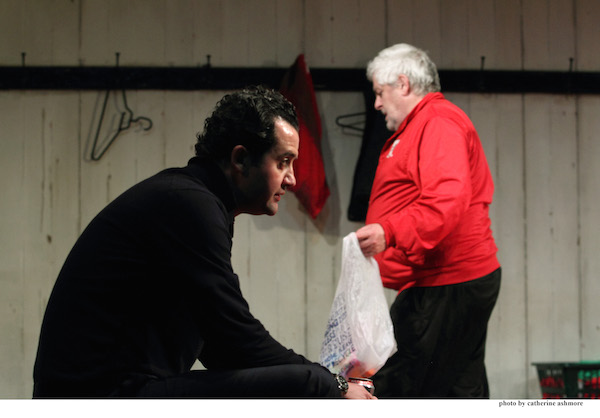 Jordan becomes the centre of a tussle between the two older men, a fight between Yates’ idea of the club and what football should be, and Kidd’s desire to win at any cost and do well for himself in the process. Kidd cajoles Jordan into cheating, finding the “marginal gains, [the] incremental edge” as he defines it in humorous circumlocution, while Yates, who admits he threw the odd elbow in his time, urges Jordan to listen to his conscience, to trust in his talent and not learn the subtleties of conniving and trickery. Kidd plays cruelly, manipulatively on Jordan’s enthusiasm and his lack of a father figure, geeing him up: “Don’t be the fuck up. Be the one who makes it through.” Of course, his motive is selfish, but Jordan’s naivety prevents him from seeing this, even as Yates, like a fat, rickety Cassandra, warns him of Kidd’s ways.

The dialogue is sharp, snappy, at times hilarious, and brilliantly evocative of the sort of dark or offensive humour that often characterises close-knit groups of (usually) men. Any football fan will smile wryly at descriptions like “He’s a ghost! He finds space that ain’t there. He’s so fucking good he don’t exist!” or the pitch being a “knackered old meadow” rather than “emerald”. The whole texture of the play is imbued with this sort of language and its use to great comic effect, even as the issues the play tackles grow darker.

The cast are brilliant: Yates is played with dignity and fire and a pathos-evoking physicality by Peter Wight; Daniel Mays’ Kidd is slimy but quick-witted, domineering and unguent and yet also oddly pitiable; and Calvin Demba is extraordinarily good as Jordan, wiry, energetic, a mix of shy youth and angry young man, desperate to please but also left cold and cynical by the experience of his early life. He has a rare quality in an actor, that of physically inhabiting a role that needs to convey something purely in the physical realm, in this case the bouncing, snappy athleticism of the athlete, without ever missing a beat in his spoken performance either. 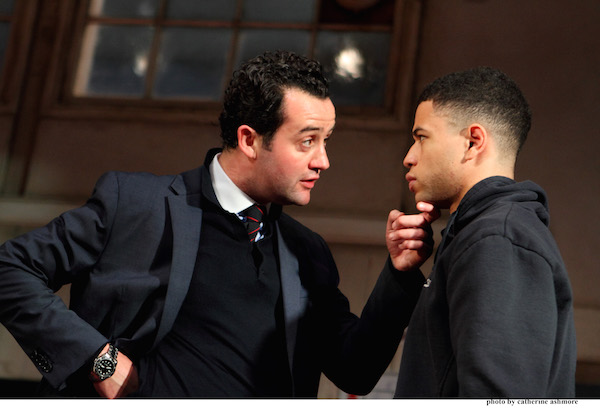 The simplest way to read this play is as an Against Modern Football piece, and indeed, that is partly the point. Marber’s own experience with Lewes FC shines through, both in the veracity of his dialogue, but also the almost ideological stance of Yates as a symbol of ‘the old ways’.  Kidd’s description of Jordan as “a piece of business”, “an asset” is withering, but so is the way the play treats Kidd and football as a whole. In this vein, and indeed as a genuine tragic-comedy, the play is a real success.

But what I found so interesting was what the audience and, indeed, previous reviewers, seemed to take from it. The quick, ‘banterous’ humour went down well, but when the play became darker and the issues that do genuinely plague football today, corruption, exploitation, cheating and so on, came to the fore, the audience in some ways seemed lost. I have noted the same response in reviewers: as Susannah Clapp says in the Observer, Marber’s lament for football as voiced by Yates “is a stretch too far for those of us who belong to the small majority of non-match attenders”; and even the Guardian’s Michael Billington, in a characteristically perceptive review, says that “the play’s protracted conclusion has one too many lyrical speeches about the game’s potential.”

The problem here, and it is a problem for the play itself, rather than anyone’s enjoyment of it, is that while Marber has written something brilliant and serious, it is about football, and so many people will not take it that seriously.

Literature and sport have an uneasy relationship, for the most part. While football has been used in Tom Wells’ Jumpers for Goalposts and Tom Stoppard’s Professional Foul as a vehicle for exploring bigger ideas, sport is often reductively a mere backdrop or an aspect to a character in ‘serious’ literature. Good sports journalism or sports-writing uses sport as a lens through which bigger issues can be examined, but literature very rarely turns that lens back on itself. Perhaps it feels that sport is insufficiently interesting in itself (even popular books like Fever Pitch are less about the actuality of sport and more about one man’s way of fitting it into the rest of his life). 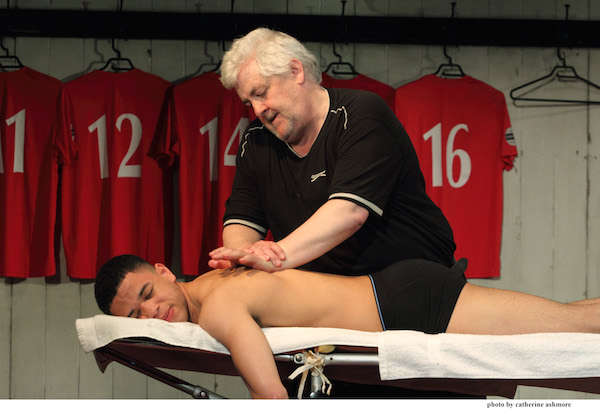 This is the milieu in which many of the audience at the National Theatre and some professional critics would experience the play: Yes, it’s well acted and funny, but football is not really a serious subject, is it?

They may look for wider social points, and find them, but the real heart of the play is in part about football itself, what is really happening to the game that you and I love. Marber is writing about football itself as much as he is writing about fathers and religion and society, because it really matters to him. I did feel that the power of that commentary was lost on some reviewers and audience members because theatre crowds and football crowds probably don’t have much of an overlap, an observation that I hope does not seem judgemental of either group, but that is rooted in having been to both things a fair bit.

Marber’s play is furiously angry at modern football, acerbically yet clinically angry, and as a football fan and football writer, I felt chilled by the powerful expression of that fury. But I would go further than that, further than the crushing coexistence of malaise and corruption and self-interest at the heart of much of modern football. To me, this play is also about working men’s clubs, about mines and factories, about real communities, places that existed in a spirit of mutual support; as Yates says of the club itself, “something so pure, so innocent, we forget we have it.” He says too, “A crowd of people gathered together in support of a team has purpose.” A crowd of people gathered together for any reason has it too.

Yates shouts at Kidd, who stands for every footballing profiteer, “You sold out our clubs and you sold out our game” but he is also speaking to that wider sense in our society that that support has gone, that greed and the triumph of the individual at the cost of a sense of community has ripped the soul out of this country. When small, community-run institutions like football clubs fall prey to this kind of greed, what hope do we have of retaining a sense of the mutual in the face of relentless self-advancement?

The reasonably comfortable world of the theatre-goer is rather removed from the cramped, often cold and bleak view of the non-league spectator. So too is the world described in Marber’s play, the football club, but also the need for a communal spirit, the bonds of these sorts of environments that can pull people back from the brink in times of hardship. The powerful elements in our society are generally not intolerant of such places, but they do not see their purpose in the same way that the people who live and breathe them do, and they also probably identify more with Kidd’s quest for wealth and success than Yates’ self-abnegating loyalty to a bigger cause, loathe as they might be to admit it.

There are real lessons in this play, about football and about society: the greatest shame is that the people who most need to hear them are least likely to get the point.

The Red Lion is on at the National Theatre until September 30th.