No-one ever tells you the truth about having children because if the truth was ever told, the human race would grind to a halt. People say, “Ooooh, having a baby will change your life,” but because they say it in the same tone of voice they’d use for telling you that a new coffee maker will change your life, you just smile politely at them. They don’t go into specifics. It would only upset you. They don’t warn you that it will be years before you sleep normally again, or get to finish a cup of tea, or get to watch the news in the morning or listen to anything in the car, anything at all, except Princess Elsa letting it go.

Fortunately, there are about a million wonderful things about having children, and I’ll bore you with one of them here. They are the perfect antidote to the cynicism of our society. Their hearts are pure. They haven’t seen it all before because they haven’t seen anything before. They wobble around the world with open eyes and they are utterly fulfilled by things that we never consider doing. Like building towers with blocks. Like swinging on swings. Like colouring-in.

There has been something of a comeback for colouring-in recently, as the Guardian noted last month. Adult colouring-in books, not in a sexy way, are charging up the Amazon charts, propelled by the theory that they relieve stress and bring calm to the frantic.

“Yet another symptom of the widespread infantilisation of the West,” moaned one reader. Well, maybe he’s right. But who cares what he thinks? The night is dark and full of terrors and if leaning over a desk with a pack of coloured pencils brings peace, then you colour away, my friend.

The only problem is that the majority of the adult books seem, well, a little dull. Fortunately, Ockley Books offer a football-specific solution. Not flowers, not unicorns, not fairy castles. But football pundits presented for your delectation with blank faces, blank clothes and empty speech bubbles  It’s an odd idea, but you can see it being a massive seller this Christmas. After all, who wouldn’t want to spend an hour or two filling in Robbie Savage? 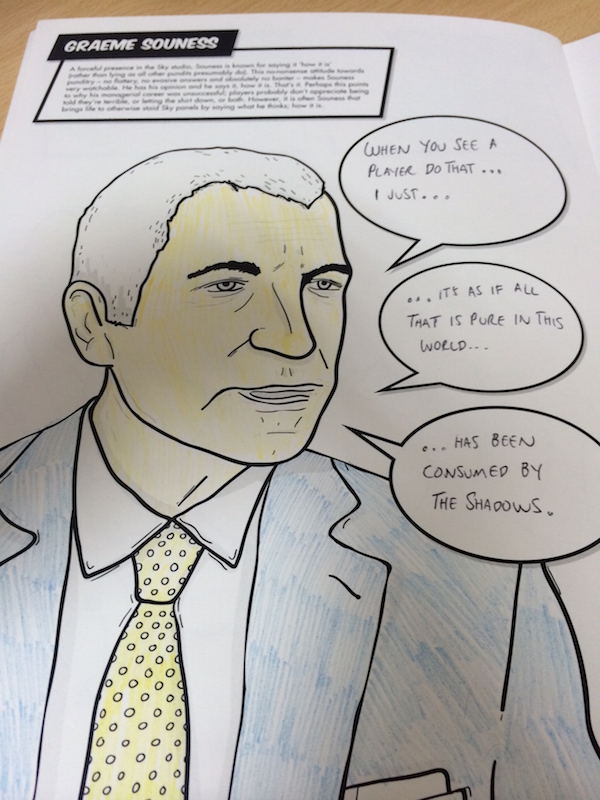 With a packet of pencils and a nice cup of tea, I get to work on Graeme Souness. And it actually is quite relaxing. I’ve got the radio on, I’m working at my own pace, I’m carefully angling the pencil across his lapels, then flipping over and going the other way to create a contrast with the breast of his jacket.

Everything is going well until I select what appears to be a light tanned orange, but it comes out yellow and I give Souness the look of a man with no kidneys. I move on to Andy Townsend, working carefully to keep in the lines, not in and around them. (*applauds @benjaminwillsSJ*)

Richard Keys is the first beneficiary of the Souness disaster. Under my steady hand and better chosen pencil, he turns a smooth chestnut brown and I use the most vivid colour in my arsenal to provide him with one of his jackets from the 1992/93 season. He’s never looked better. I get the feeling that I could get into this. 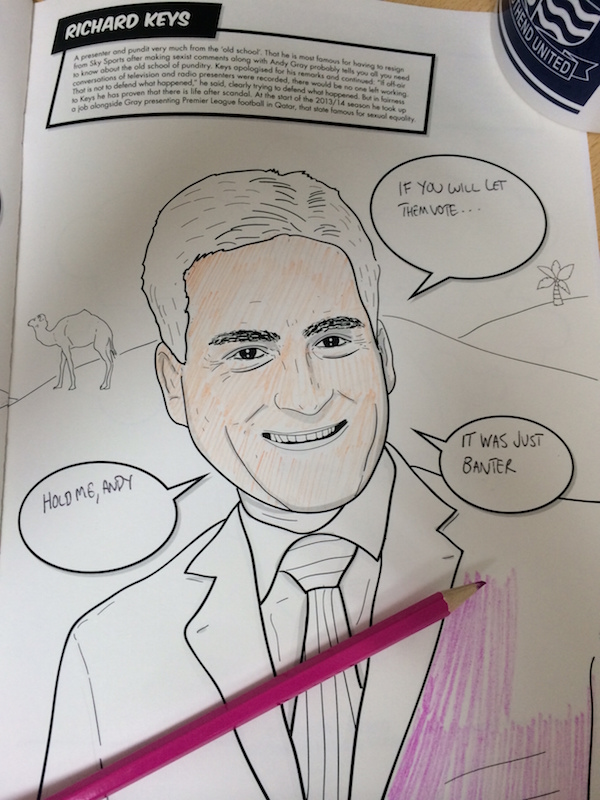 In this, as in so much else, the kids are way ahead of the grown-ups. Have you ever watched a child colour in? The focus. The determination. The way they jut their tongue out of the corner of their mouth. They are at peace. At least until they go over the edge, hurl the crayon at the wall, rip the page out with their tiny fists and set it alight with the power of their minds. That doesn’t reflect well on anyone. But as any parent will tell you, just getting them to settle for a moment is always a success of sorts.

Of course, this does raise the question of where the ‘widespread infantilisation of the West’ will take us. Every other pub is filled with boardgames. Millions of grown-ups play Minecraft, which is essentially Lego with a bottomless bucket of pieces. The Prime Minister’s wife rides a trendy adult scooter. Where do we go from here?

I say we go to the park. Because if you think colouring-in is good, you should really have a go on the swings again. It will blow your mind.

You can pick up a copy of Quite Literally…Pundit Colouring over at Ockley Books.