There is no one in world football who thinks more of himself than Zlatan Ibrahimovic. Whether he’s on the pitch, working a promotion, or just living his life, Zlatan is the centre of the universe. In his mind, not even Lionel Messi or Cristiano Ronaldo can wrestle away the spotlight. The world just can’t get enough of Ibra-mania.

Paris Saint-Germain crowned their Ligue 1 title this season with a 9-0 thrashing of ES Troyes AC with Zlatan stealing the headlines, announcing that unless the club replaced the Eiffel Tower with his statue, he would be leaving Paris in the summer.

It’s widely believed that his next destination will be Manchester United, where he would be reunited with Jose Mourinho, his former coach at Inter Milan. There have always been doubts regarding Ibrahimovic’s quality in England but, now 34, it looks as though he will finally take up the challenge. Can he make an impact in the Premier League or, considering he turns 35 in October, is this merely a last pay day way beyond his peak? 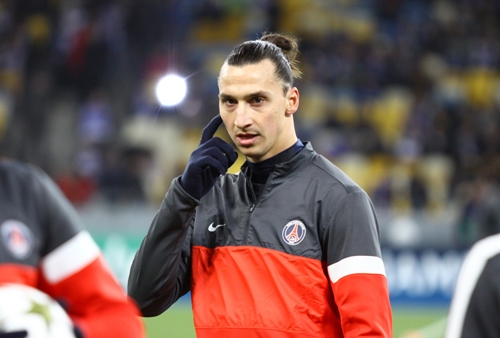 Despite his enormous ego which fuels the relentless Zlatan Show, something has changed within Ibrahimovic during the last nine months. Although he would never admit it publicly, he has noticeably altered his attitude – you could call it self-awareness, humility even – and it has made him a better player.

Like all footballers, there was also going to be a point where Zlatan would begin to slow down, his form suffering as a consequence. And for anyone who watches PSG on a regular basis, during the 2014/15 season it looked like the talismanic Swede had lost his edge.

Injuries, in particularly with his heel, took their toll. With Laurent Blanc struggling to adapt without his star player, he often rushed the striker back into action, doing more damage than good. Zlatan looked like a spent force. Perhaps PSG’s finest victory of 2015, the Champions League win against Chelsea at Stamford Bridge, was achieved despite Ibrahimovic’s red card after half an hour. Even down to ten men, they looked more energetic and determined than they had with the forward in the line-up.

Zlatan finished the season with 19 goals. Eight came from the penalty spot. Disciples of the striker were quick to defend him but it didn’t look good. It was clear he was far from fit – at one stage missing six successive matches through injury – and concerns were heightened by a seven-game streak in which he failed to score from open play.

Although his form picked up in the closing weeks of the season, another injury in the summer encouraged speculation that he could be on his way. There were doubts over his ability to continue at the highest level, but the Swede was not to be defeated. It would take him until the seventh game of the 2015/16 campaign to open his account, but he looked different, he looked fitter.

There was a new hunger about his play, but also a sense of acknowledgement. He was still dropping deep, looking for the ball at every opportunity, but now there was a feeling that he no longer had to do everything, paying more attention to his body to make the most of his resources. Looking for Edinson Cavani with more through balls and with the joy of having Angel Di Maria on his right, Zlatan was looking to link up with his supporting cast more than ever.

When PSG were destroying teams in their march to the title, Zlatan was at the forefront of everything they did well. Two goals and an assist came in the 5-0 win over Toulouse, he played a part in every goal in the 3-0 win over Nice, and, as they annihilated Lyon 5-1 at the Parc des Princes, he was the conductor of perhaps their best performance of the season. After seemingly limping towards the end of his career six months previous, this was a healthier, more vibrant Zlatan. Perhaps the best we have seen of him in France.

Recent training videos for Sweden at their Euro 2016 training camp highlight the flexibility he has acquired through yoga – a discipline that is credited with extending Ryan Giggs’ playing career at Manchester United until the age of 40. The black belt in Taekwondo also helps. Allowed by Blanc to fully regain his fitness, combined with a new sense of understanding and accepting his position, everything has clicked perfectly.

Zlatan even answered critics in the Champions League as PSG reached the quarter-finals. It was the Swede who provided the vital pass for Adrien Rabiot to open the scoring against Chelsea at Stamford Bridge, before he showed his remarkable agility to get on the end of Di Maria’s cross and finish off the English side. Despite PSG’s disappointment when the striker missed a penalty that would have given his team the lead in the quarter-final against Manchester City, his reputation had already been rebuilt.

Outsiders who question what Ibrahimovic can bring to United on the pitch frequently bemoan the lack of quality in Ligue 1. But the top division in France is one of the most physically demanding leagues in Europe, especially the battle between centre-forwards and defenders. Let’s not forget that N’Golo Kante, Riyad Mahrez, and Kurt Zouma, before his cruel injury, have all stood out for their English clubs this season.

Having regained his sharpness and core fitness, Zlatan is the perfect man to kick-start the Mourinho era at Old Trafford. Just like the striker in 2014/15, the 20-time champions are no longer surrounded by an air of invincibility. But Zlatan has that special aura and winning mentality that is contagious to the players around him.

Even the most critical observers have had to admit that the Swede was superb for PSG this season. Not only has he doubled his goals tally from 19 to 38, he also improved his stats across the board – in shots, pass percentage, and assists.

He has had to adapt to get the very best out of his body once again, but despite his age and the challenges that has brought, few Premier League defenders will have faced a striker with Zlatan’s power should he arrive in England this summer.