We always said that we’d never tell you five things we learned, but we’re making an exception today because it’s about Football Manager. We’re sure you’ll understand. It goes without saying that all observations are of the BETA version of the game, not the complete product which is released on November 13.

THE INTERFACE HAS CHANGED

As usual, there’s a new interface to get used to, but there’s nothing here that will completely disorientate you. There’s the same sidebar, the same division of sectors, the same rolling calendar across the top of the screen. The new circular fitness and match sharpness graphics will take a bit of getting used to, but you can still hang the mouse over and get an accurate percentage, if you’re one of those people who’ll play someone at 87%, but absolutely not at 86%. There are Prozone branded stats popping up as the game processes information. Everywhere there is colour, as if two rival computer games went to the toilet and made a series of ‘glorified spreadsheet’ jokes about Football Manager at the urinal without realising that Football Manager was sat in one of the cubicles and heard every word, tears rolling silently down its little geeky cheeks.

THE TACTICS ARE SMOOTHER

From those drab old lists of instructions, we move to intuitive pitch maps and, dare we say it, a return to a slider-like system for things like pressing and direct passing. The new tactical screens are cleaner and fresher and we like them a lot. The long rows of LED-style green lights to indicate comfort in a role are much appreciated, especially as the player roles have grown in importance so rapidly. If you still can’t see that you’re misusing an expensive footballer now, there’s really no hope for you. You’ll also find that your assistant offers targeted tactical advice on forthcoming opponents. The advice might not necessarily be right, but it’s nice that he’s thinking of you. 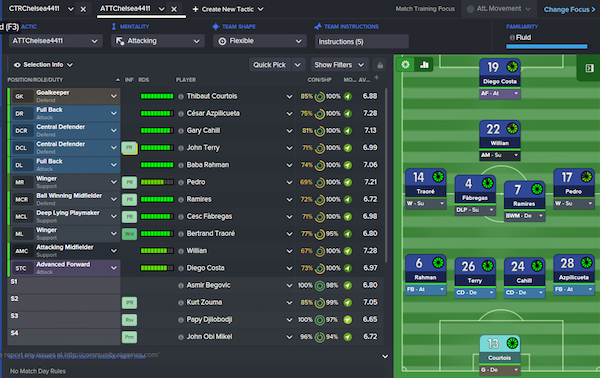 IT’S EASIER TO STAY IN TOUCH

One of the problems that many people encounter on long games is the speed with which they can lose touch with the outside world. In this instance, we don’t mean the *real* outside world; current affairs, family members and suchlike, but the virtual world you’ve created on your laptop. Unless you make a point of checking each and every overseas league tables every week, you won’t notice that Sevilla have made a slow start to the season and aren’t in the European places. Why is that important? Because their players will become disenchanted and you can lure them away. You won’t realise that Internazionale aren’t even in the top ten in Serie A. Perhaps that might be your next challenge? This screen really helps on that front. All the information in just one click. It helps to fuel the feeling that you’re part of a wider world, affecting it, being affected by it. It’s that all important sense of immersion. This isn’t a major feature, but it’s a good one. 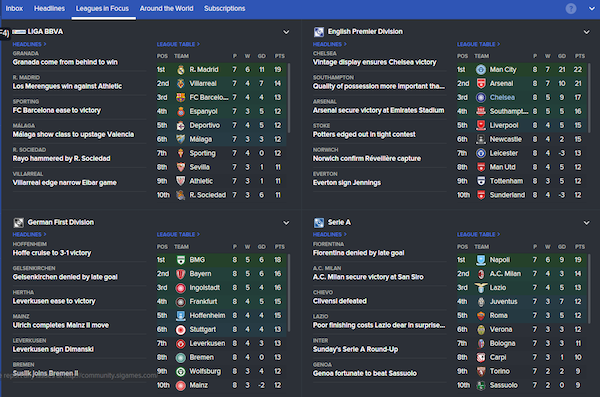 Football Manager 2016 is not easy. This is annoying. There was something comforting about the old days when you knew that a certain set of tactics and maybe a certain set of players would propel you to success. There was something relaxing about gently tinkering with your European giants, Peterborough, dropping in regens with impunity because you were so successful that it wasn’t a risk. Well those days are gone. You can’t even get away with overly attacking football now. In an aborted game with Chelsea, the Blues were absolutely torn apart in a 4-2-3-1 formation that had Eden Hazard and Willian set as attacking inside forwards. And why wouldn’t they be? Chelsea were essentially two teams. Four attackers and six defenders. The AI figured them out in no time. But with the slightest of tweaks, a 4-4-1-1 with Hazard and Willian as supporting wingers, Chelsea were far harder to beat. The only problem is that the AI is watching and the better AI managers will soon find a way through this formation too. You know that bit in Star Trek: TNG where the only way they can fight the Borg is to continually modify their phasers? (ED’S NOTE: I promise you that I’m not a virgin.) That’s Football Manager nowadays. It’s not very relaxing.

THE AVATARS ARE A BIT WEIRD

The absolute state of this. I wouldn’t mind, but he actually looks slightly healthier than I do in real life. I’m not sure about the hands though. There’s a touch of Kingpin about those hands…

Football Manager 2016 is out on November 13, but you can pre-order now and play the Beta version until everything updates on launch day.