Goal Click is a global football storytelling project. They find inspirational people from all over the world and ask them to tell stories about their own football lives and communities – all initially using disposable cameras and their own words.

This is the true insider view. Goal Click provides people with the power, control and freedom to tell their own story through the common language of football. The results are always compelling.

Over the past five years, storytellers have been discovered from Sierra Leone and Serbia to Peru and Pakistan.

For the past few years, a new series focused on refugees has been taking shape. Ahead of World Refugee Day, Goal Click launched Goal Click Refugees in partnership with UNHCR, the UN Refugee Agency. The series collaborates with refugees and asylum seekers around the world to tell their personal stories in refugee camps and in new host communities through the lens of football.

There are more than 70 million displaced people around the world. Contrary to popular belief, most of these people are hosted by countries in Africa and the Middle East, not Europe or North America.

Goal Click Refugees tries to show the range of these situations, from displaced Syrians in Jordanian refugee camps to Sudanese and Congolese refugees in Kenya, alongside the experiences of Afghan refugees who have arrived in Europe.

Refugee voices are mostly unheard and silenced. These stories capture the realities of their communities and can begin to change the narrative, using football as the common factor.

Here, in their own words, are their stories… 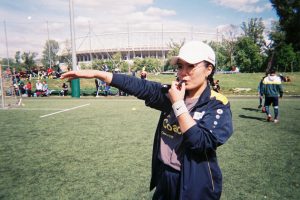 “At the first match we played with the men, some of the guys were still saying that we should stay at home. We talked to them and tried to show them that we belong here. Football doesn’t belong to men alone. It’s not a man thing. We can play it too if we want. A week later, the guys apologised. That was a good thing. Women can also play football well; it is just that men have been playing it for longer.

“Through football and my new friends, I’ve been able to find myself again. When I say that, people may think that it’s an easy thing to say. But in my case, it was different. I didn’t know the language; I didn’t know anyone. It’s as if you are being born as a baby again. I think you can only understand it if you’ve experienced it yourself.” 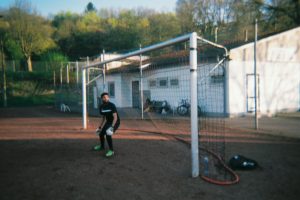 “Football is the only constant in our lives. It doesn’t matter where you are from or what you’ve been through. There’s always something you share with other people despite the differences. There’s always a part of you seeking peace, love and normality.

“The local team TuS Koblenz, which is playing in fifth division in Germany, decided to form a team for the refugees who are living in Koblenz to give them the chance to integrate into German society and establish a new life in Koblenz. The majority of the players are refugees who are living in a camp for asylum seekers – they are Syrian, Iranian, Afghani, Somalian, and Eritrean.” 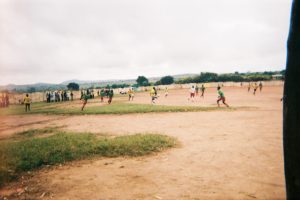 “I was born in Goma, Democratic Republic of Congo (DRC), and lived there until the age of 11. When they killed my father in the fighting, my uncle recommended that me, my 8 brothers and sisters and my mother should leave DRC and move to Malawi for safety. Before I came to Malawi, I played football for a club called Kajeada in Goma.

“These are the players of Young Talents football team in Dzaleka refugee camp in Dowa, Malawi. The boys and girls come from the DRC, Burundi, Rwanda and Tanzania. I was trying to show how children live their day-to-day life at Dzaleka – football is a big part of everyone’s life. Football is important to me as I feel it is the only way I can help my family and community. I also love interacting with others and football helps me meet new people.” 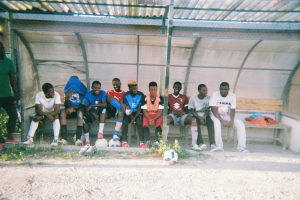 “Senza Frontiere FC is a football team formed by refugees and asylum seekers that practices all year and during the summer participates in “Balon Mundial – the World Cup of Migrant Communities”. Everybody has their own beautiful story.

“Football changed my life. Through football I met a lot of people, a lot of friends who helped me so much. Thanks to football I found a job and a lot of good people. I play with Italians and refugees. I like Italians, they are good at football, and I have a lot of very good friends here.” 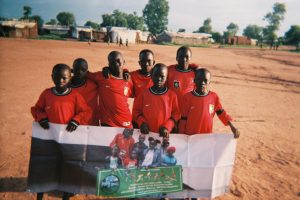 “Around 60,000 people displaced from their homes by war live in Yida. Football allowed me to have many friends from different tribes and around the world. It brought me peace and unity with people.

“It’s important to show boys and girls, young women and men. Although football is sometimes seen as male-dominated, girls are encouraged to be in the teams, to lead the football teams and one of the teams has a female goalkeeper. It is important to support gender equality to help change in South Sudan.” 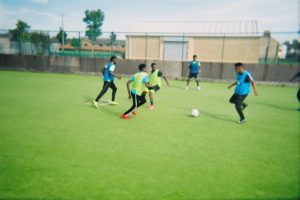 “In Liverpool I play with asylum seekers and refugees from Syria, Sudan, Eritrea, and Afghanistan. They fled due to war and conflicts in their countries. Listening to the challenges they have faced and gone through is so painful. Football is my life. Football is important because it is a universal language. It doesn’t matter where you’ve come from, your race, religion or skin colour.

“I was a professional footballer and played in the Kenyan Premier League for Muhoroni Youth FC. My dream is to become an international FIFA referee. I am part of the FA CORE (Centre of Refereeing Excellence) program. In two or three years I could be a Football League referee. I think I would be one of the first professional referees in the UK from a refugee background.” 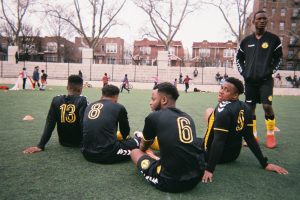 “I’m from Haiti, where I discovered one of my biggest passions, which is soccer. I used to play soccer in the streets, futsal, and I had joined some clubs and played real soccer a few times with my friends. Sometimes with my friends we organized some street games with other neighbourhoods. In 2015 I moved to NYC with the hopes of finding a good soccer team, but when I came everyone played basketball. With determination in 2017 I found Rooklyn.”

Find out more about Goal Click’s Refugee project on their website and watch out for more from their campaign.