Creator and presenter of Italia 90 podcast, Vincera!, Mark Godfrey explains why the World Cup means so much to him and many others who look back on the summer of football so fondly. Relive Italia 90 – or discover its twists, turns and storylines for the first time by listening to the podcast, which runs from 8 June to 8 July.

Fourteen is a funny age for a kid. You’re certainly too old for hide and seek, it’s probably pushing it to be collecting Panini stickers. Yet taking those first tentative steps toward drinking cider down the park and chasing girls is still a couple of years away – at least it was when I was a lad. It was during this awkward inbetween stage of my adolescence that the 1990 FIFA World Cup landed and redefined the sport and industry of football.

I remember a reasonable amount about Mexico 86 – filling the sticker album and being allowed to stay up late to watch some games on TV – and even snippets of Spain 82 and pretending to be Zico or Paolo Rossi in the school playground kickabouts. But Italia ’90 was my World Cup.

I was coming to the end of my first year in high school, doing well, and having the time of my life with the friends who are still largely my best friends today. I was a half-decent footballer myself back then too and I’d attracted a few offers of trials that summer. I had a head of thick, lustrous dark hair (long since gone) and felt like things couldn’t get any better. 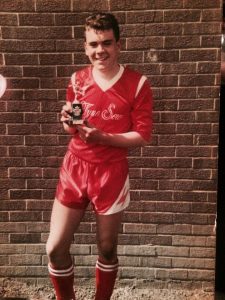 Don’t get me wrong, the world was no less scary and unpredictable then as it is now. The previous year had been both exciting and formative as momentous events unfolded in countries near and far.

The established old world order that had shaped my young life and those of my parents began to dissolve at pace: the Berlin Wall came down, communism in eastern Europe crumbled and the Cold War ended. Nelson Mandela gained his freedom signalling the beginning of the end for Apartheid in South Africa, Margaret Thatcher’s days were numbered but not before the Poll Tax riots, and general social flux gripped the nation. We were also just weeks away from Iraq’s invasion of Kuwait and the starting pistol for the First Gulf War.

Then along came Ciao, Italia 90’s mascot. And Nessun Dorma. And those Olivetti TV graphics. And World in Motion.

Suddenly that tumultuous year had a summer hiatus. Italia 90 felt like a month-long party played out to a soundtrack of sunshine and synth-pop. It was more like a collective cultural experience than a football tournament.

This was the first World Cup we could watch in its entirety at convenient times in the UK in sharper, colourful definition. A veritable feast of football. That doesn’t sound that special until you appreciate we just didn’t get to see much live football on TV in those days.

Listen to Vincera! The Story of Italia ’90 podcast

In fact, there had only been 12 games broadcast live during the previous English league season and no European action at all bar the odd highlights package on the BBC’s Sportsnight. Now we could enjoy a whole game during dinner and one before bed. The impact of that as both a novelty and a precedent mustn’t be underestimated.

Italia 90 was my first ‘grown-up’ World Cup too, where I could appreciate more than just the win and lose of it all or seeing only selected highlights. There was the nuance, subplots, tactics and tension. It was a proper immersion in a hitherto mysterious world of football that just couldn’t happen today thanks to the wonders of the internet and ubiquitous TV coverage.

I vividly remember delighting in the opening game and how exotic Cameroon vs Argentina in Milan’s awe-inspiring San Siro stadium was. I was carried along with the passion and fervour of the Italians desperate for a home victory. There was Holland, West Germany, Brazil and the rest. There was drama – and plenty of it – to go with some of the most iconic moments in World Cup history. It was quite the treat for someone brought up on the honest stodge of British football in the 80s.

And, of course, there was England.

That sort of football fever hadn’t been experienced across England for a generation and I, like everyone else, got swept up by that rollercoaster ride to the semi-finals and Paul Gascoigne’s tears. It was captivating and euphoric. The youth of today will feel similarly warm and fuzzy about Russia 2018 one day, mark my words.

In truth, it was a poor World Cup, low on goals and entertainment. The back pass was still a valid and acceptable way to defend (or waste time), and defenders were still able to kick a number of lumps out of the flair players without fear of immediate dismissal. None of those faults mattered. The past is a foreign country, they do things differently there.

Italia 90 showed us what football, especially watching it on TV, could be like and made us more receptive to what came after with the Premier League. Italia 90 made football in England cool again after years in the doldrums.

It was my coming of age as a fan. Fourteen is roughly when many kids drift away from football and find other things to occupy their thoughts, never to return. Italia 90 and that blissful summer meant I could never do that.

Tell us about your memories of Italia 90 (if you’re old enough) by tagging @TheSetPieces and @Vincera90 on Twitter and we’ll include our favourites on The Set Pieces in the coming weeks.