Few were expecting England to do quite so well in this summer’s Women’s World Cup. Knocking out the hosts Canada, the horrendous last-minute own goal in the semi-final against Japan, redemption in the third-place play-off versus Germany – the very late nights for fans back at home were all worth it once that bronze medal was secured.

The England team’s return to Heathrow, however, was slightly muted. For those who remembered the open-top bus and the throngs around Luton town centre back in 1990, welcoming the squad who finished fourth in Italia ’90, the rush for the Lionesses to return to everyday life and domestic competition felt a little incongruous.

Indeed, six days after they touched down back in the UK, the players were back in Women’s Super League action. Having played in front of 55,000 fans in Canada in stadia used previously for Olympics, they were now returning to the mostly non-league grounds where they usually ply their trade.

Manchester City’s quintet of England stars – Lucy Bronze, Jill Scott, Karen Bardsley, Toni Duggan and captain Steph Houghton – have a slightly different experience. Keen to make their women’s team the best in England, the club have poured investment into their facilities as well as their salaries – and they have their very own home ground next to the Etihad Stadium.

“You have to see it to believe it,” says Bronze, almost in disbelief as she reflects on the culture shock she experienced when she signed for the club in 2014. “You hear about the facilities on offer at City, and then it just exceeds your expectations. It’s better here for us than at many men’s clubs.”

“When we started, we wanted to make it as close to the men’s game as possible,” explains Gavin Makel, head of women’s football at Manchester City. “We’re not where we want to be, but we’re a lot further ahead than we anticipated when we did the five-year plan. We’ve got big plans for the club, and we won’t rest until we’re where we want to be.”

The publicity achieved throughout the World Cup has boosted ticket sales in the WSL, and the governing body are quick to point that out.

“We’ve seen a big impact off the back of the World Cup,” confirms the FA’s Katie Brazier. “We’ve seen a bounce – some of the clubs are delivering fantastic crowds well above their targets.”

City now hold the attendance record for the league, attracting 2,102 fans to the Academy Stadium for their first game back after the summer break when they beat Birmingham City 1-0 thanks to a goal from Duggan.

“It wasn’t full,” recalls Bronze, “but it was fuller than we’ve had it. Maybe in a few seasons we’ll start selling the place out.”

Makel points out that the crowds going to women’s matches are a very different demographic to those going to watch men play; there is much less tribalism, and many more families can afford it as a day out. 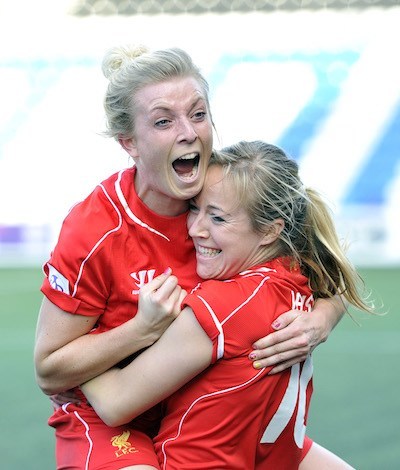 “You get fans who watch Liverpool Ladies play and then come and watch us as well,” he points out. “They might not be Manchester City fans, but they love the game in general. Women’s football is more like how men’s football used to be – you can get close to the players, get a photograph and an autograph, there’s a nice atmosphere. People see it as a genuine sport.”

With the likes of Houghton splashed over the back pages as well as the glossy magazines, it is easy to overlook the WSL2 clubs – those one step below the big-name sides and stars. A big fuss was made about Fran Kirby during the tournament – the youngest cub of the Lionesses, the striker who scored goals to make her late mother proud, returning to football after experiencing depression, and then of Reading and the only second-tier player in the England squad. Now she has been snapped up for a record transfer fee by Chelsea – and the WSL2 have lost one of their biggest names and most appealing media narratives.

It is always difficult for smaller clubs to nudge their way into the media spotlight when the superstars are so used to hogging it and the journalists and broadcasters want the big names. Even though WSL2 attendances have also increased since the World Cup, their media coverage remains limited.

“When Fran Kirby scored for England in the World Cup, the BBC tweeted that she was ‘the only player in the squad who doesn’t play in the WSL’,” says one disgruntled fan of a WSL2 club. “It just doesn’t have the visibility of WSL1, and that’s a shame, because if people in towns like Oxford, Durham, Reading and Watford were more aware of the fact that they have local clubs in the WSL structure, they’d be more likely to go along and watch them – especially with the post-World Cup publicity for the women’s game generally. Generally it feels like a struggle for WSL2 clubs to publicise themselves as being part of the WSL structure and it would help if the media just paid a bit more attention.”

“We do as much as we can to raise the profile of WSL2, but naturally the broadcasters want to focus on WSL1,” admits the FA’s Brazier.

Some fans of WSL2 clubs are starting to wonder if they would have been better off staying in the Women’s Premier League. That competition runs through the winter – parallel with the men’s leagues – and the gulf between the best and the rest is, perhaps, not quite so apparent.

“The [WSL2] sides who have previously played in the top division are very much better than most of the others,” says one Oxford fan. “Their technique is better, their fitness is better, and they have strength in depth. Teams like Oxford are really enjoyable to watch – especially when they are showing a noticeable improvement from last season – but they struggle to field 11 players of real quality every week. Sides like Doncaster always look accomplished – and when WSL2 sides play WSL1 teams in the Continental Cup, the difference is even more marked.”

The Continental Cup is organised on a regional basis, with WSL1 and WSL2 clubs playing against each other. The FA are keen to point out the advantages of this – and again the rise in numbers going to watch these matches.

“The average attendance for the first round of those fixtures was 74 per cent up on last season,” says Brazier. It’s true – lots of people are watching the tournament, but what they’re often seeing is a chasm in standards. WSL1’s Arsenal beat WSL2’s Watford 3-0 a fortnight after the end of the World Cup. Six days later, WSL1’s Manchester City beat WSL2’s Durham 5-0, and on the same night WSL1’s Sunderland beat WSL2’s Everton 5-2. The Oxford fan’s point about the difference in quality between the two divisions is apparently a fair one.

Because of the way the WSL operates – clubs are awarded licences to compete in the league, and the current strategy runs up until 2018 – its development, particularly the progress of WSL2, is currently rather unclear, at least to those from the outside.

“The clubs exist in their own right,” explains Brazier, stressing the importance of sustainability. “The club development fund that we provide is targeted at particular areas, and they’re all provided with the same support.”

This is true, but this does not necessarily guarantee that all clubs are functioning equally.

“Despite the success of the national team, women’s football clubs at all levels in England still find financial sustainability a big challenge,” says Dr Jo Welford, an expert in football governance. “Some FAWSL teams have a much higher level of financial support from a men’s football club than others which, along with the differentiated funding from the FA, has created an unfair playing field. While it is acknowledged that the ultimate aim is for clubs and the sport more widely to become financially sustainable, this is still some way off.” 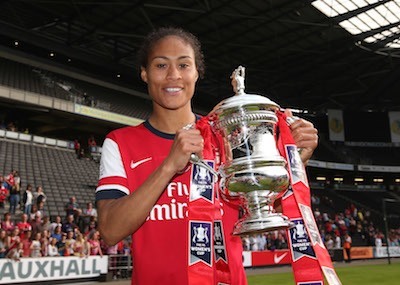 Even within the WSL1, there is a massive disparity between clubs, not necessarily in terms of ability on the pitch, but in terms of the time and money invested in them. Prior to the FA Cup Final, Arsenal’s Alex Scott made a passing comment to the press that she and her team-mates spent hours of their lives in a London Colney coffee shop, waiting for the men to finish training so that they could begin their own. For a club that dominated the women’s game for so long, it seems rather shocking that they should be left behind.

Manchester City, meanwhile, opt not to worry about their rivals, concentrating their efforts on their own progress. They have one piece of silverware in the trophy cabinet – last year’s Continental Cup – and they are looking for more.

“We have to grow the game from the top,” says Makel. “There’s us and other clubs putting in effort and resources, and we’ve got rivalries going now – no bitterness, just friendly, and you need that. People want to watch the best players play week in week out, and being full-time professionals – that makes such a difference.”