On a Monday morning in mid-autumn, Sarah wakes up in her home in Leeds. Rather than getting ready to start the week at the local charity for whom she works, she packs her bags and prepares for the hour-long drive to Manchester airport. Twelve hours later and over 3,000 miles from West Yorkshire, she will find herself in the balmy evening heat of Tel Aviv. The following day it’s on to the venerated streets of Jerusalem, where her team’s tour of Palestine begins.

The team in question is the women’s section of Republica Internationale, one of several left-leaning football clubs from the political hotbed of post-industrial Yorkshire. Along with organisations like Yorkshire St. Pauli and AFC Unity, Republica are responsible for the distinctive left-wing flavour of the region’s grassroots scene. On their website, Republica are described as a “socialist football team” with “cooperative ideals” at the core of their philosophy. Believe it or not, the club seems more relaxed about politics than it used to be. Back when it was first formed in the early eighties – an event which took place in a smoky corner of a bustling pub – Labour Party membership was supposedly a minimum requirement for participation in the team.

While there is a long-standing overlap between left-wing politics and affinity with Palestine, that wasn’t the only factor in the women’s team travelling to the Middle East. In 2007 the Republica men’s side went on their first tour of the Palestinian territories and teams have been going back and forth intermittently ever since, meaning there were already contacts in place to make the logistical element of the trip feasible. One of the main points of contact for the women’s team was the co-founder of the Hebron International Resources Network (HIRN), a volunteer organisation which works to fund housing and education for the most vulnerable Palestinians. He would be the group’s guide and host for much of their week-long stay, meeting them in Bethlehem that Tuesday.

“I think what brought us together was a commitment to left-wing politics in general and a shared belief in equality, both in football and in the wider world,” Sarah says of the team’s motivations for wanting to go on the tour. “Be that about solidarity with groups who are facing oppression in the UK – say LGBT people in sport, for instance – or people facing similar issues overseas, which is why we started building these links with Palestine.” 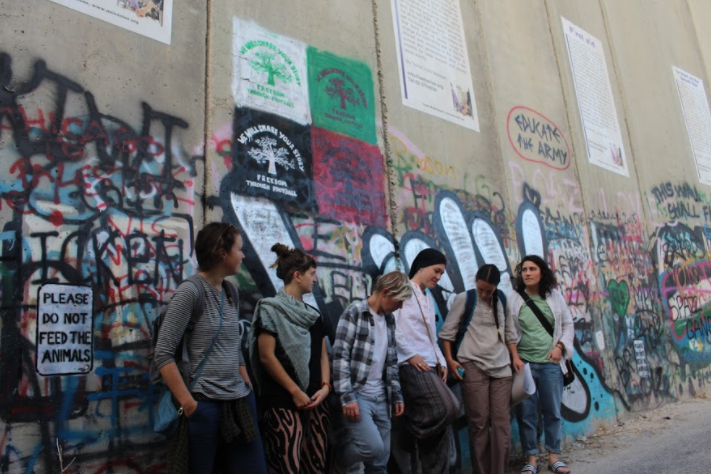 While the conflict between Israel and Palestine is a source of endless controversy and acrimonious claims about where the blame lies for ongoing violence, there’s no doubt that many Palestinians live in oppressive conditions. According to Amnesty International, day-to-day difficulties include severe restrictions on movement, demolition of homes and amenities, forcible evictions, arbitrary detention, suppression of protests and illegal settlement building on Palestinian land.

With the Israeli authorities known to deny visas to those they deem pro-Palestinian political activists, much of Republica’s tour was organised in secret. “We obviously didn’t want to give any indication of our association with a left-wing football club or be deemed Palestinian sympathisers,” says Anna, another member of Republica. Members of the team flew to Tel Aviv separately and had cover stories about being tourists in Israel, fearing they would be turned away at the airport. They also made sure to keep the tour low profile on social media, so as not to raise suspicions they were visiting for political as well as sporting reasons.

Along with the players from Republica, several women associated with the Easton Cowgirls and Frau Dorte Becker also joined the tour. The Cowgirls are another left-leaning women’s outfit from Bristol with established links to Palestine, while Frau Dorte Becker are associated with 2.Bundesliga club St. Pauli. The teams are linked by Freedom Through Football, a loose international network of sides committed to inclusive, anti-discrimination ideals.

While some of the trip was more reminiscent of activism than a traditional sports tour – the women involved visited schools, villages and community projects associated with HIRN, many of which are under constant threat of demolition – there was still a lot of football to be played over the course of the week. Travelling from Bethlehem via the village of Jubbet al-Dhib to Hebron, Umm al-Khair, Ramallah and the South Hebron Hills, the itinerary was demanding. One day, Republica contested games against a team formed from civilian observers working with the Temporary International Presence in Hebron, before playing Hebron University not long afterwards.

“The level of determination from a lot of the female players we met was overwhelming,” says Sarah. “To overcome so many cultural and essentially political barriers to do the thing you want to do – that’s pretty amazing.” While women’s football in Palestine faces many everyday logistical challenges – players struggling to get through military checkpoints in time for training, for example – there’s also the challenge of women playing what’s often considered a man’s sport in a fairly conservative society. Traditional Islamic culture and religious sensibilities are taken seriously in Palestine, though different areas have different reputations: Ramallah is considered relatively liberal; Hebron not so much.

While some of the team’s opponents felt relaxed about playing football, others hid their involvement from their relatives. “When women there reach a certain age, that’s when lots more cultural barriers get in the way, so it’s getting beyond that so they can play at a later age despite pressures to settle down, start a family and so on,” says Anna. 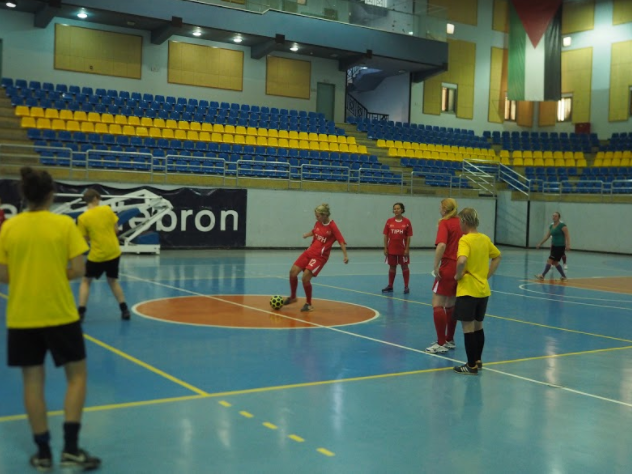 On the other hand, a couple of Republica members note that the situation wasn’t so different in Britain until relatively recently. Jess, another participant in the tour who’s played for Republica since September having previously been with the Easton Cowgirls, says: “Often our opponents were very interested in how things are different or comparable in the UK. There was a girl in one of the teams from Ramallah and we were asking her what it’s like to be a girl playing football in Palestine. She was saying things like: ‘A lot of people don’t expect girls to play football’. And we were saying ‘Yeah, really, it can be quite similar in Britain as well’. She seemed pretty surprised.”

Although Britain hasn’t completely shaken off sexist attitudes in sport, it’s fair to say there’s less disapproval of women’s football on a wider societal level, if not among a hardened group of boors and chauvinists. When Sareyyet Ramallah recently played Hebron University, for instance, they competed in shorts and it made national news.

In terms of the progress being made in the face of religious and cultural conservatism in Palestine, Republica players seem to have differing opinions. While those who went on previous tours note there’s now less resistance to women playing the game – and there certainly isn’t as much concern about fixtures being filmed and photographed – major problems still exist when it comes to organising competitive matches.

“The main women’s league had about nine teams in when we went a few years ago, but this year the league wasn’t running,” says Katie, a member of the Easton Cowgirls. “The women told us they only had five teams last year and they’re struggling to continue it, mainly because there aren’t enough young girls getting into football. There are a couple of big academies that really promote sports for young girls, but that’s it really: one in Ramallah and the Diyar Academy. All the other areas have relatively few young girls getting into it. So they’ve kind of come to the point where a lot of the girls who were really enthusiastic and really into it have grown up and are now moving on, so that was sad to see.”

While the women’s football scene in Palestine faces major challenges in encouraging women of all ages to get involved, the quality of the play that greeted Republica was generally excellent. Given that their opponents rarely get to play competitively, games were taken pretty seriously. Whether playing against established sides like Diyar, Sareyyet Ramallah, Hebron University, Beit Sahour, or improvised teams of observers and handball players – as well as against villagers on a dusty orange pitch on the edge of Umm al-Khair – Republica were met by committed opponents. Afterwards there was time to share conversation, food and hospitality, as the two sides exchanged stories about the realities of life in Britain and Palestine. 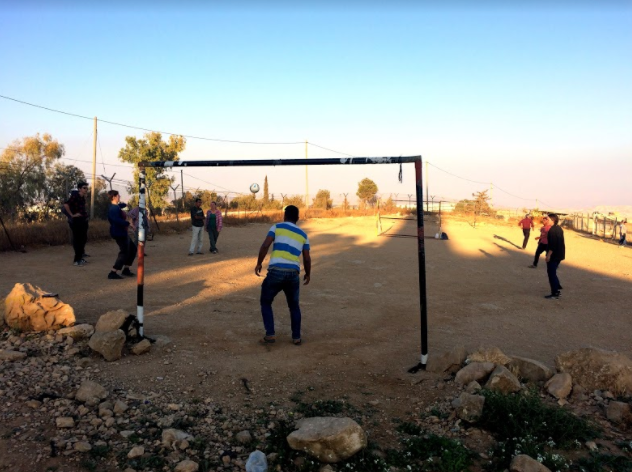 “A lot of people we met, both on and off the pitch, seemed quite happy that other people were there,” says Sarah. “The very act of being present in Palestine felt to us like quite a political act, while I think it was perceived as quite a clear act of solidarity.”

It’s difficult not to mix sport and politics in a country still unrecognised by numerous United Nations member states, including the US. The election of Donald Trump as president has only increased political tensions in the region, particularly after the commander-in-chief made the controversial decision to recognise Jerusalem as the capital of Israel despite far-reaching international opposition. In this political climate, there’s symbolic significance in a group of women from Britain visiting Palestine, playing football and making lasting ties. It’s a message that ordinary people in Palestine are not alone, ignored or forgotten.

Republica’s presence wasn’t welcomed by everyone, however. There were several moments of tension on the tour that vindicated the group’s decision not to publicise their visit.

Having arrived back in the village of Jubbet al-Dhib with hopes of helping to renovate a local clinic, Republica’s tour van was intercepted by a convoy of Israeli soldiers and settlers. The team were held in situ for some time and forced to hand over their passports, which were only returned once they had left the area. “We could see this signaller looking on top of a hill, looking down on us. We were all taking photographs and it turned out it was a soldier,” says Anna.

Soldiers stopping civilians they consider suspicious is no doubt routine in many parts of Palestine, but Republica players nonetheless felt this was a targeted act of aggression. Certainly, it’s not hard to see how being intercepted by armed men while visiting a rural village would be intimidating. “We were just there to visit people, so that was a reminder of how Palestinians’ freedom is restricted all the time,” says Jess. 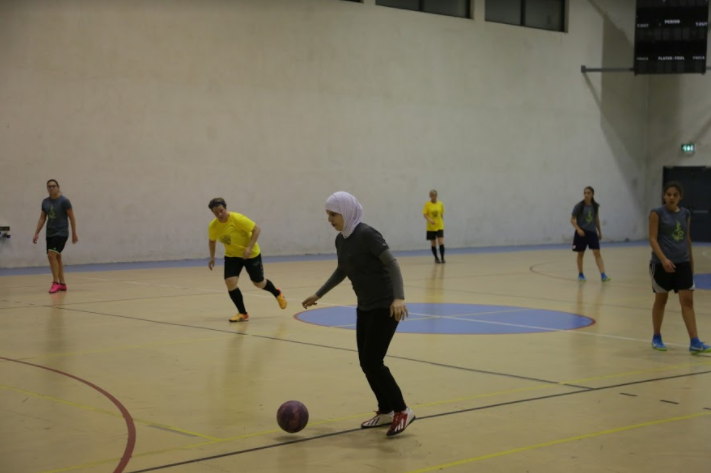 Despite being forced to leave Jubbet al-Dhib prematurely, Republica’s tour wasn’t cut short by the authorities as some of the participants feared. The rest of the trip went off without incident, ending on the winding streets of Hebron. There, Republica players visited schools and a factory before joining their final host for the trip, a woman named Laila. In the morning they ate a traditional Palestinian maqlouba for breakfast, before getting their stuff together and starting the long journey back to Yorkshire.

Many of the women who went on tour with Republica acknowledge that football doesn’t change the world; with Trump in power in the US, life for Palestinians is only going to get more difficult in the coming years.

What football does do, however, is build bridges between people, challenge social preconceptions and forge friendships spanning thousands of miles. With future tours on the horizon for Republica, there is fierce determination among women in both Britain and Palestine to keep alive the spirit of the game in even the most trying times.

The names of the women on tour with Republica have been changed at their request, to protect their identities and head off any attempts by the Israeli authorities to disrupt future tours.