It’s clear what Suzilawati Zain’s priority is. Cramming in as much Euro 2022 action as possible in her three weeks off night shifts in Singapore will allow her. And looking at how hectic her schedule is, she’s done a pretty good job of it.

“My flight will be from Changi Airport in Singapore to London Heathrow,” Zain explains. “We’ll be flying from Singapore on the 16th and will be going straight to our first game, which is Denmark versus Spain.”

It’s the first step of a nearly 7,000-mile pilgrimage across the globe to experience the Euros taking place in England this summer. Once here, Zain will watch 10 games, soaking in every second of a trip that breaks new ground for her. 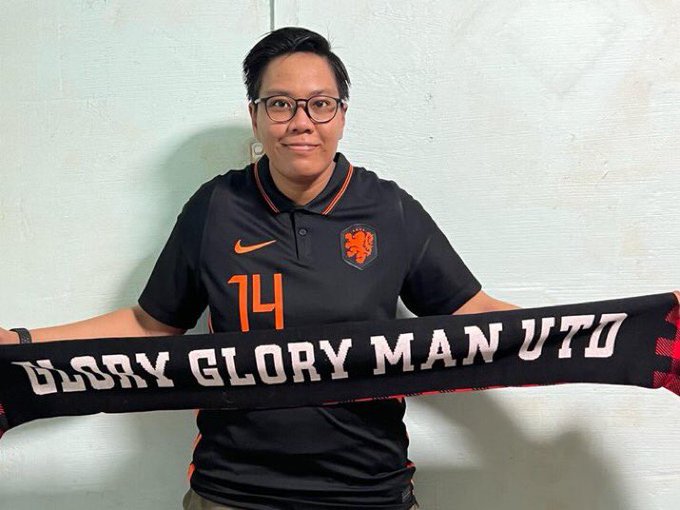 “I’ve been to a Manchester United men’s game in London and also a pre-season friendly, but this is the first time I’m attending women’s football games. It’s something new. Just suddenly I got interested in it. I was watching the US women’s national team and that got me into studying women’s football.”

It’s one thing to be a fan, quite another to travel halfway around the world for 10 tournament matches when your own nation isn’t even competing. Zain will attend three of the final round of group games and then every knockout match from the quarter-finals right through to the final at Wembley on 31 July.

“It came about through a conversation with my friend,” she tells The Set Pieces. “I basically said to her, ‘how about we go to watch this tournament that’s upcoming?’ and she said, ‘OK, let’s go.’ I converted her to women’s football. Then we planned it. [We’ll stay in] hotels near the stadiums, which is better because I’ve been to London before and it’s quite a trek to take the train and the underground [everywhere].”

There won’t be much time for resting when they touch down in England, though.

Zain and her friend will travel straight from their 14-hour flight to the Brentford Community Stadium for their first of their matches, where she’ll see her favourite Uniter player Ona Batlle as Denmark and Spain face off.

But while the 23-year-old full-back might be the star attraction that day, Zain has another player in mind when it comes to who she’s most excited to see during the tournament. So, who is it?

“Jackie Groenen,” Zain replies swiftly. “She’s quite underrated, but the job that she does makes the team tick.”

Groenen is the heartbeat of the Netherlands’ impressive team, the reigning European champions after winning the 2017 edition on home soil under the stewardship of current England manager Sarina Wiegman.

The Netherlands capitulated in the second half of their recent friendly against this year’s hosts England, taking 1–1 scoreline and parity into the dressing room at the Elland Road friendly, before losing 5–1 following a one-sided second half.

“I couldn’t watch it as I was working a night shift,” Zain says, but after catching up with the match later, she’s earmarked England as a threat this summer thanks to their decisive substitutions and impressive squad depth.

“The changes that Sarina [Wiegman] made really affected the game,” she continues. “You saw Beth Mead coming on, Ella Toone and Alessia Russo coming on. That changed the game. Alessia Russo nearly got a goal as well. Beth Mead is one of my friend’s favourite players too.”

Zain is pleased the Euros are in England and feels it can bring a lasting impact to the growth of the women’s game.

“With the Euros being held in the country where football comes from and also in the country with the biggest football fans around, I think it will progress a lot and more men’s fans will watch it,” she affirms.

“You hear comments like, ‘women shouldn’t play football’, ‘women should stay in the kitchen’. So when they [male fans] start watching women’s football, it will open up their minds and they’ll see that it’s actually not that bad.”

Women’s football is rising in prominence in Zain’s homeland too.

There’s no need for free tickets for this summer’s Euros, though, with more than half a million already sold — more than double the tally from the previous edition in 2017. Ticket buyers have come from 99 different countries.

And if Zain’s prediction is right, those fans could be in for a treat with no clear favourite for the title meaning it could be one of the most open major tournaments for some time.

Barcelona Femení won all 30 league games on the way to the Spanish league title this season – and were runners up to Lyon in the Champions League final.

Barça twice broke the all-time record for highest attendances in women’s football too, using the home of their men’s side, the Camp Nou, with the second attendance seeing more than 91,600 fans watch their 5–1 rout of Wolfsburg in the Champions League.

Many of those in attendance that day had travelled from overseas for that historic event and this summer’s Euros will see a similar flurry of fans flying in from across the world to capture the action first hand.

Perhaps Zain wins in terms of dedication, although she knows she’s not quite alone in crossing half the planet for this summer’s tournament.

“I know of a fan from Mexico who’s coming over to watch the last few games — the semi-final and final,” she says.

Only three games, call that dedication? Pah, that’s nothing on Zain.