It was a rainy Sunday afternoon in October when Ben Smith realised the true extent of the public’s intrigue in Virtual Reality.

As CEO of pioneering VR company Laduma, he was attending an NFL showcase event on Regent Street in London. The plan had been to ask people if they wanted to try on a headset while they queued to meet a Jacksonville Jaguar or practiced throwing like a quarterback. But then it started pouring it down.

“We were sheltering from the rain under this big inflatable,” says Smith, “and then people started coming towards us to ask what we were doing. So we put them in the headsets.”

At first there were only a couple of daring volunteers, but once others saw what was going on a crowd started to gather. Soon there were no headsets left to give out, a long line of people waiting in the cold just to get a taste of the VR experience.

“It was families of all ages; kids as young as three and four, mums and dads, grandmas and grandads. It was an amazing thing for us. It surprised us how ready people seemed to be. All they needed to see is that there were headsets there to try out and that was it.”

A week after Laduma were overrun on Regent Street, PlayStation VR was released to loud fanfare in the UK. Oculus Rift, Samsung Gear VR and HTC Vive are already on the high street. The biggest television networks and film companies are ramping up investment in VR, while the New York Times has given away 1.5 million cardboard headsets to readers.

The VR revolution has arrived – and it will be televised, in high-resolution 360 video.

The possibilities are enormous. Sports fans can gain closer access than ever before to their heroes, with Laduma taking viewers behind the scenes at LA Galaxy and the Wimbledon tennis championships this year. It won’t be long until you can live stream matches in VR from the comfort of your sofa – which just happens to also be the best seat in the stadium.

That transition is both the biggest challenge and the leading priority for the medium, according to Smith. The demand is there, it’s just a case of the technology catching up.

“That’s the thing people want to know, whether some point down the line football matches can be viewed virtually instead of having people in the stadium. There are huge fan bases in Southeast Asia and North America; could they watch a Premier League game from a seat in the stadium? Of course the answer is yes. The technology will get there and it isn’t far away.

“Fans who go to the game every week have a connection to the club that you can’t beat. But there are millions around the world trying to get a piece of that experience. What’s it like to stand on the Stretford End or on the Kop? VR gives you the chance to get an authentic experience as close to it as you can possibly get.”

For now the focus remains on ‘moments’, taking fans onto the training field or into the dressing room before a game. It’s the sort of content regularly shared across social media in 2D, but VR adds an exhilarating new perspective.

The next step is to move these moments into the live arena, allowing viewers around the world to enter the action at key stages in a game.

“That’s where VR can come in right now: there’s a free-kick and the broadcaster prompts you to ‘watch this moment in VR’, and the camera comes in on the wire and hovers you over the ball. Those kind of moments can be the first step towards the whole experience.

“The truth is that football matches are more enjoyable right now on TV. You get the stats, you get the commentary, you get the analysis, you get to sit around with your mates and watch it – it’s a very social thing. The issue VR has at the moment is how does it break that habit and how does it involve other people in the experience?”

It is perhaps easy to feel self-conscious wandering around in a headset, but if the content is good enough to keep you entertained the anxiety should soon disappear.

Having seen commuters enjoying VR experiences on the New York subway, Smith expects a similar breakthrough to happen in the UK. Every development in VR is now a question of ‘when’, not ‘if’.

“The barrier to VR is getting people to put on the headset and take themselves into that world. But once you give people an idea about what is waiting for them, then I don’t think we’ll have an issue. When we go to see people, we know all we have to do is put them in the headset and they come up with the ideas because they’re inspired by what they see.”

Engaging the public is one thing, but it’s an even greater challenge to convince Premier League clubs to take the plunge.

So far the NFL have typically led the way in trialling new content, but with the technology now readily available – and the cost of headsets falling all the time – the demand for VR content will soon increase.

“For clubs there’s understandable conservatism around risk-taking and mistakes and trying things. It’s something you see the American sports teams do more readily,” says Smith.

“But the point at which they have to make a decision on whether they get involved is coming over the horizon. It’ll take someone to really go in with both feet, if you like, to make everyone else go ‘Wow, we should be doing it’.”

One of the most exciting aspects for clubs is the potential for VR to revolutionise training programmes. NFL teams such as the Jacksonville Jaguars have already been experimenting with using VR for training purposes, and there has been interest from coaches in the Premier League.

At a time when sport is dominated by the principle of marginal gains, VR could be the key to fine-tuning a player’s skills. The only tools required are a smartphone and a headset.

“There’s also an opportunity for clubs to use it for specific players. We’re talking to an NFL team who want to film a load of plays and then sit with a player away from the training field, put them back in a game situation, and ask them to react as they would.

“While the guys are in the headsets, the coach can view on a TV screen where his player is looking and identify potential errors. He can then go back and say ‘Listen, if you looked in this area you might have spotted that’.”

For the disciplined self-improvers, VR affords endless opportunities to study the opposition and work on specific areas of development. It may also play a vital role in building confidence by reliving positive actions.

In an interview with ESPN four years ago, Wayne Rooney talked about the importance of visualising a successful performance: “I lie in bed the night before the game and visualise myself scoring goals or doing well. You’re trying to put yourself in that moment and trying to prepare yourself, to have a ‘memory’ before the game.”

Now he can actually live it in VR.

“Using it both for entertainment and player training is very interesting,” says Smith. “In the NFL, quarterbacks can sit with a headset on – not tiring themselves out training – but actually getting a sense of the play that might come up or recognising a blitz that’s coming.

“There are opportunities with football – it’s more difficult because it’s such a fluid game and there are less stop-start moments. But around set pieces, and for goalkeepers, there’s massive potential to use VR for training.”

As well as exploring new partnerships within sports, the priority for Laduma is maintaining the quality of their product and pursuing new advances in the technology.

“It’s about quality. Right now we’re in a position where VR content comes out and everyone says everything’s great because it’s new and it’s different. The truth is 90% of the stuff that comes out is not good enough.

“It’s so important that people get a good VR experience the first time they use it because I’d hate to think that people see bad VR, make a judgement on the medium, and then walk away.” 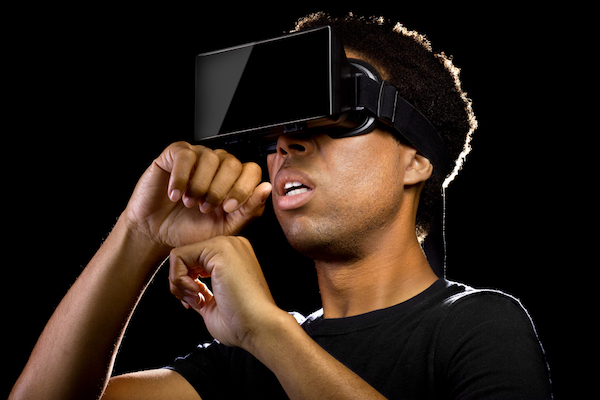 As with television, there will be good VR and bad VR. After a while the fascination with a new medium will begin to wear off – and that’s where Smith, a former sports correspondent for The Times and BBC, insists Laduma’s immersive storytelling will set them apart.

“We put storytelling right at the top of what’s important to us. The tech’s great, we love it, but without brilliant storytelling and people who understand stories in sport, I don’t think we’d have been as successful as we have been.

“As with everything – whether it’s good social media or good digital video – quality tends to rise to the top. After that initial period where everyone’s trying stuff, good or bad, there will be a point where people think ‘Okay, we can pick and choose a bit more’.”

One thing is for certain, with the likes of Google, Facebook, Twitter, Sony and Samsung jostling for space in the market – ‘huge beasts’, as Smith puts it – VR is here to stay: “It takes a brave man to bet against something like that.”