The La Liga TV presenter speaks about her journey from the United States to Spain, via Turkey, to becoming one of the faces of Spanish football coverage across Europe

What are your first memories of football growing up, Semra?

My first memory of football would have to be when I was three years old, when I kicked a football for the first time. I grew up in Los Angeles, so girls football was always my sport and I got into it from a really young age. From three I just fell in love with it – it was love at first sight.

Were your family big into football?

I’m an only child but my parents are avid football fans, they absolutely love it. My dad, for some reason, is a big Manchester United fan. Unfortunately for him, I was a Liverpool fan because I loved Michael Owen.

When I was really young, my dad was my team’s football coach and you could just see him running up and down the sideline shouting and screaming. He was always hardest on me I might add. My mum used to say that you could hear him from miles away… Football was always a family thing in our household. 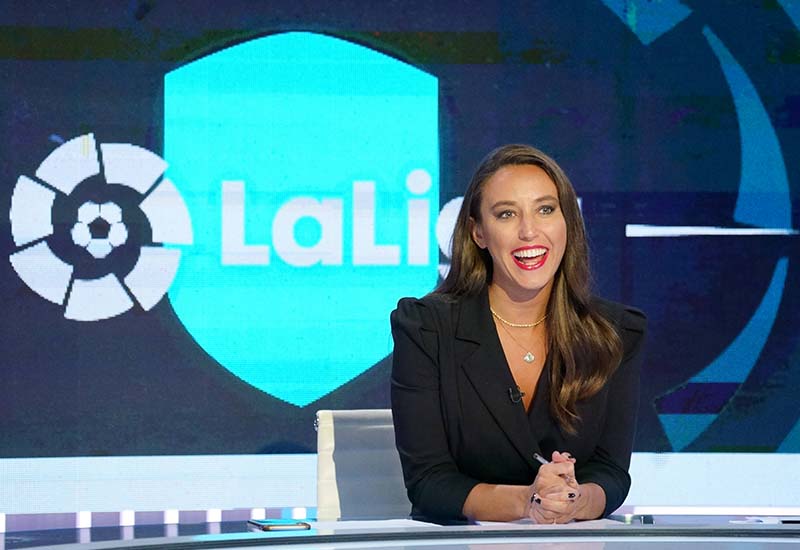 When did you first decided you wanted to go into football as a career?

For most of my life I wanted to be a professional football player and that was the dream. If I wasn’t at school or studying, I played football. Then when I was 16, I suffered a bad injury and that was the end of that.

I was unsure what to do after studying International Relations at University of California Berkeley and my mum said to me that I’d make a great reporter because I love sports and traveling. She gave me the belief.

I applied for a sports journalism and communication masters at the UEM in Madrid and got accepted. I did the whole programme in Spanish and worked an internship off the back of that.

What made you choose to study in Spain?

Again this is down to my mum. When she was around 20, she lived in Colombia and Mexico. While there, she understood how important it is to speak various languages beyond just Spanish, learning Italian, Portuguese and French afterwards too.

When I was growing up, she spoke to me in Spanish to ensure I at least got a basic knowledge of the language. Whenever we went to Turkey to visit family, we’d often stop off in Spain on the way and because of those lessons, it was the obvious answer when I chose my masters. I knew when I was only five or six, really young, that I would one day live in Europe and in Spain.

How did you find the transition going from the US to Spain in relation to being a football fan and moving somewhere where mostly everyone lives and breathes football?

Growing up in the States and going to watch an MLS game in the 1990s was nothing like it is now, it’s so hard to compare that with games in Spain and England. The first time I went to the Camp Nou it was mind-boggling to see it full of people – the colours, the noise, the energy.

When I first moved to Barcelona, it was the 2007/08 season when Pep Guardiola was taking over. Messi was coming into the fore, so I got to witness that live most weeks, I was very lucky. At that time too, I had a boyfriend who was from Barcelona and he was a big Barca fan. He taught me about Spanish football, which journalists to follow, which programmes to watch, especially on the radio, which is huge in Spain.

It was so easy to fall in love with Spanish football and Barcelona at that time because the football was so exceptional that people spoke about it all the time. Every time I met with local Catalan friends, they would talk about Barca. The atmosphere and the vibe was a cultural immersion.

After you finished your masters, what were your first few broadcasting gigs?

After three or four months interning for Al-Jazeera Sport, Real Madrid got in touch saying they had an opening and I spent two-and-a-half years doing a bit of everything from reporting in English and Spanish, to writing, editing, producing my own shows.

Then I worked in Istanbul for two years, where I worked as a sports anchor and correspondent for Beyond the Game’s daily sports news programme. I was sent all over the world to cover sports, including the 2016 Euros in France.

After a couple of years in Turkey, I returned to Spain for personal reasons and the stars aligned as La Liga TV had just opened up in 2018. Before I started there, I had a short spell hosting e-sports for Konami.

What was it like covering your first major tournament?

I loved it, I was running on adrenaline alone because it was exhausting, I worked 17-18 hour days. One day we were in Marseille, Lyon the next, then we were in Paris and then Nantes. It was really good fun and it was a dream come true.

Out of the people you’ve worked alongside at La Liga TV so far, who has left the biggest impression on you?

That’s a really tough one to answer, I hope that they don’t read this. Gus Poyet is definitely one of them, though. He’s such a charismatic, naturally engaging, endearing and warm person. He has that South American flair about him too, being Uruguayan. On top of that, he is incredibly intelligent and communicates extremely well. I love the analysis he brings with his footballing brain too, he’s the full package. But honestly, I love them all. Everyone is different to the other and brings their own strength and when you combine them with someone else it makes for such an engaging conversation and good television.

What does a day look like for you when you host a game day for La Liga TV?

This season I work 10-hour shifts. On a Monday, for example, we finish at 11:30pm so I get there at 1:30pm. I do my own research so spend the first few hours doing preparation, just me and the programme editor. Together we will design the outline of the things that we want to talk about, then I’ll put the meat on that frame if you like. After about three hours of preparation, I go to hair and makeup, come back and spend the final hour finishing the last details ahead of the show.

The show is two hours and we treat Mondays like ‘hangovers’ by looking back on the events of the weekend and the final half hour is a preview for the Monday night games. Then comes the game and we will do half-time and post-match coverage until the end of the shift. In truth, it’s a 24/7 job, even on my days off, I always read about football, watch the games or follow the topic – it’s a lifestyle, it’s a passion so you never work a day in your life.

Even this Sunday [12 December] I’m hosting the ElDerbi de Madrid Watch Party at Sports Bar and Grill Marylebone in London which starts at 6:30pm, with Real Madrid v. Atlético de Madrid kicking off at 8:00pm. In this, we’re bringing the studio to London which will be fun.

Which player have you enjoyed interviewing most?

The one interview that meant the most was Xavi. That’s because back when I played, I was a central midfielder and when I began watching Barcelona when I moved over, Xavi was the one player that stood out to me. He’s my favourite footballer of all time. I used to joke when I got my first break in the industry that if I interviewed him then that’s that, I can retire!

I was very fortunate that interviewing him came much quicker in my career than I expected. I’ve interviewed him three times, two of them when I went to Qatar. I even got to have a kickabout with him too, which was better than anything I could have ever imagined. Obviously I didn’t retire after that, but it was a highlight for sure.

What would you say to the next generation of young women out there reading that want to be the next Semra Hunter and present football for a career?

I would say go for it. You have nothing to lose and if it’s your passion, then it’s always worth seeing it through. I think now, more than ever before, the industry is opening up to women in a much kinder and more welcoming way. Now is a great time to pursue those dreams. There is space for everyone, you can find your niche and a way to be different.

You can look at people like Gabby Logan who is an absolute reference and she is amazing. Take inspiration from those people but definitely be yourself, be your own person and make a name for yourself. Don’t be the next whoever, be you and make that come across. It’s difficult, there are obstacles and setbacks on the way but you learn from everything. Perseverance is the key.

Finally, you’ve already achieved so much, but what are your dreams for the future? Obviously there’s a World Cup next year, have you got one eye on that?

LaLigaTV and Stonegate Group will be running fan events throughout the season to celebrate the best of Spanish fútbol. For more details, follow @LaLigaTV and @WeLoveSportUK on Twitter. And to sign up for LaLigaTV, visit premiersports.com/subscribenow