Where did the journey that’s led you to be FourFourTwo editor begin?

In my first year of sixth form, we had do a week of work experience. Most people went off to work at their dad’s company, got paid employment or just blagged it to take a week off school. I went to my local newspaper, which was the Richmond and Twickenham Times.

I was supposed to be there at 9am and I turned up at 10 to, thinking I was being slightly keen. There was a girl there who had arrived five minutes before me and they [the newspaper] realised they’d double-booked and only had one slot for work experience. They didn’t want to send me away, so they asked if I wanted to go and help the sports editor out. A week’s work experience turned into about five; I loved it and kept turning up. That was it for me, I knew what I wanted to do and that was the only thing I was interested in – writing about sport. 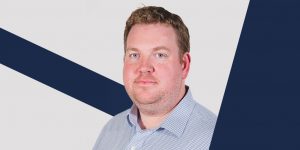 Did that lead to your first paid role, then?

I got some bad advice from somebody at the newspaper and I was told to go to university, not necessarily to read journalism, so I read history at Oxford Brookes. While I understand that from a life point of view, from a professional point of view, if I’d started from the bottom those three years earlier, I could have got further on a bit quicker.

I had it in the back of my mind that I wanted to do journalism, but didn’t do anything while I was at university. Then when I left, I, unsurprisingly, still didn’t have a clue what I was going to do with my degree. I stumbled across an NCTJ course while reading the media section of The Guardian, so I signed up for that and that was me on my path to being a journalist.

Did that open doors for you?

I was doing my NCTJ at a company called News Associates and the other side of their business was a sports news agency called Sportsbeat. At the time, they had a contract with the Non-League Paper and Football League Paper to provide all their match reports. So from Monday to Friday, I was doing basics of a journalism qualification and on Saturday, I’d go out and cover football matches.

I remember the first match I went to was Peterborough versus Bristol Rovers in League Two and the second I went to that, I thought ‘this is what I’ve got to do and all I want to do’. Sitting and watching football, then writing about it was the best thing I could do. I didn’t care it was League Two and the standard was rubbish and the press box had no plug points, I was so happy to be there. So I carried on through the course covering the likes of Peterborough, Leyton Orient and Dagenham and Redbridge.

So how come your first permanent role wasn’t in sport?

I was obsessed with being a sports reporter but when it came to finding a job in sport, it was very difficult to find one. I was put forward for a job at the Windsor and Slough Observer as a junior news reporter and I was a bit hesitant. Probably the best advice I was given was to just take it and get in the industry and learn.

It was a really good experience and it probably improved my writing. I wasn’t very good at writing intros, for example, because writing a sports intro or match report I could do, but writing a news story I wasn’t particularly good at that. I got better at that doing it on the job and it made me a better journalist because it sharpened my news sense. When you don’t want to write about village fayres all the time, you need to find some proper news. It was a very good grounding and in hindsight, I don’t regret it all.

I was still doing sport on the side and I’d freelance every weekend for Hayters Press Agency. I was doing matches in League One and Championship level, which was key to keeping my hand in sport and making sure I wasn’t giving up that dream of becoming a sports journalist.

After finally breaking into a full-time sports role, you were made redundant twice in a matter of months due to the 2008 financial crash. What advice would you give to people dealing with redundancy now?

When I look at the situation now, I feel desperately sorry for anyone going through this because when it’s not your fault, you’ve done nothing wrong and you’re out of the job, it’s the worst feeling in the world. Anyone I know who it’s happened to, I’ve tried to offer some help or support.

I see this year as very similar to when it happened to me in 2009 because it was on the back of a financial crash and companies not having money and making cuts. Due to coronavirus, a lot of people are losing their jobs and they haven’t done anything wrong – they haven’t been sacked, they’ve been made redundant and I think there’s a big difference between those two words. I hate hearing people who have been made redundant referred to as being sacked because it’s such a negative term as though you’ve done something wrong. They’re a victim of circumstance.

I’ve texted and rang a few people to say that, it might be obvious, but it’s not your fault and don’t take it personally, it’s a setback. There was a girl I heard had been made redundant and I got in touch with her and said ‘everything you’ve done in the past 18 months will stand you in really good stead going forward, just remember that and focus on that’. I know first-hand, it’s a horrible and lonely experience, and you question everything and if the industry is for you because you’ve found yourself out of a job. 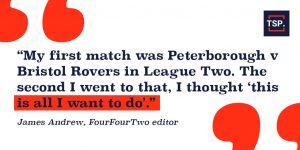 After finding more security, your career took you to the Football League Paper, MailOnline and then to Beat Media, so you’ve got wide-ranging experience. Does your path show there’s more than one route to the big jobs?

This answer might be really boring because it might be the same as everybody else, but it doesn’t really matter where you start. Whether you start in news, business or features, that doesn’t mean you can’t become a sports journalist. It does mean you just need to work a little bit harder because you have to do your job and do stuff on the side. You have to work maybe six days a week instead of five.

The more people you meet [helps] as well. I’d probably phrase this differently but when you meet people, don’t be a dick. Listen and, if you’re in a press box, get speaking to people, find out where they are and keep in touch with people. I find more and more jobs come up internally in this industry, rather than being advertised.

Now you’re at FourFourTwo, why do you think the brand has remained while other print titles have struggled?

The world is very different to when FourFourTwo started in 1994. There wasn’t internet then, so if you interviewed someone, the chances were that nobody had read an interview with that person or wouldn’t have known everything about them. The basics of FourFourTwo are the same though, in that we try to get the biggest names and the most interesting features in football. FourFourTwo still carries a bit of weight with that name, so if you go to a club, player or an agent, FourFourTwo does resonate with them. They know they’re not going to get screwed over in FourFourTwo, they know they’re not going to get misinterpreted or spun into a sensational headline like they might do giving an interview somewhere else. You’re in a safe space with FourFourTwo so we’re still able to get access to those big names.

In my time, we’ve already had Marcus Rashford and Erling Haaland, and in the next issue at the end of October we’ve got Luka Modric and Arsene Wenger. It’s about getting something good on the cover to draw people in, but there’s loads of good things in there as well when you pick it up. It’s about making sure there’s enough on the cover to draw you in and enough in the magazine to make you want to come back next month.

Finally, you must get stacks of pitches at FourFourTwo. What’s your advice to people when they’re trying to get stories commissioned?

We have to say no quite a bit, but the good ones [freelancers] will always come back. One thing I’d always say is don’t get put off by people saying no if you’re trying to get something commissioned. There are a hundred reasons why people will say no, but that doesn’t mean it’s a bad idea. Keep knocking on the door and eventually something will be right if you keep coming up with the right ideas.

It’s not necessarily that there’s something wrong with your pitch, it’s just that it might not fit what we’re doing at that time, or we’ve done something similar or have something similar lined up, but it’s never necessarily a personal thing. I do try to reply to each pitch and give them individual feedback because I think it’s important and the ones who take that on board will keep coming back and pitching ideas, and eventually you will say yes to something that’s right. Some you’ll never hear from again.