What were your first steps into sports journalism?

I knew what I wanted to do when I was young and I always say that’s the biggest slice of luck I got. If you know what you want to do, you can do something about it. And from 16/17 years old, I knew I wanted to be a sports journalist.

I went to Edinburgh Uni where I did French and Spanish, but I can’t remember anything I read there. I spent my whole time doing the student newspaper, trekking up to the sports field on Saturday mornings – while everybody else had hangovers – in the freezing cold of Scotland to watch a third-team hockey game or whatever I was given by the sports editor at the time. I learned some of the basics there: how to do an interview, how to write a report.

I moved up at the student newspaper, becoming sports editor, news editor and got to do some great stuff there. Doing languages, I went abroad for a year and worked at some newspapers in France and Argentina to get some experience. Every holiday, I just begged for work experience at any local paper who would have me. I did enough of that so when the Daily Mail were running a graduate scheme as I was finishing uni, I got incredibly lucky because they took me on as a sub editor.

Was taking a first job at a daily national newspaper like the Daily Mail a baptism of fire?

All of a sudden, you’re going into somewhere where you’re so far behind and have to catch up and get your standards up to scratch. The training scheme they did was really good, so you do close to a year of training first. It’s very intense training where they really say ‘this isn’t good enough’ or ‘this isn’t accurate enough’, then I worked with PA for a while as part of that and I did five or six months with the whole Daily Mail as part of that too. By the time you turn up, you’re not completely out of your depth.

Even so, you’re dealing with some of the best sportswriters’ copy in the industry and I was sub editing, so my job was to make sure everything was accurate, write good headlines and captions. My first night was live football. It was Arsenal Spurs and it finished 4-4 with two of the goals scored in the last couple of minutes, so I really quickly got an idea of how impressive that team was and how it was all done. 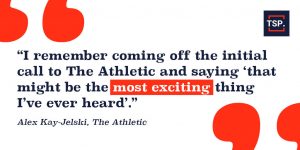 I think I was probably really annoying in terms of always suggesting stuff. I was really into tennis, so I decided I wanted to use my days off to start a tennis blog and go to tournaments and do things like that. When Andy Murray started to become more of a thing, I was quite useful at that and I was able to use my languages to help with things [too]. I think that just made people think ‘ok, this guy’s got something about him’ and I kept nagging away and being there. I was very lucky I had two or three people at the Mail who decided they liked me and was worth having as part of the editorial desk.

You went on to become sports editor at The Times. What is the secret to your success?

You can be a super genius – and I’m definitely not that – and get nowhere. You have to work your arse off. That’s the thing I always say to people: just work ridiculously hard. That’s the only way to do it. All the best people in this industry have that thing in common, they’ve all worked so hard and continue to work hard. If you’re pointing in the right direction and continue to do the right thing, you can get there. That’s what it’s about. It sounds a bit cliche or boring, but it’s the truth. Some people are more creative than others, some people are more analytical than others and some people are better with other people, but the main thing is to be a nice person and work hard.

People see a journalist’s output as writing, but it’s much more than that, isn’t it?

I’m speaking to you today when the main thing on our site is an interview with Mesut Ozil. I’m sure lots and lots of people would love to have it and it’s been picked up by every meaningful website out there, and that’s written by David Ornstein. David Ornstein has landed that interview because he’s a brilliant journalist with fantastic contacts, not because of the adjectives he uses or paragraph construction. It’s because he’s a brilliant, brilliant communicator and a damn good journalist. That’s what I look for in everyone. Our job as journalists is to provide information to people, not just to entertain them with lyrical prose.

How did your move to The Athletic come about?

I got a call from Alex Mather, who’s one of the founders of The Athletic over in America. I knew almost nothing about The Athletic and I remember coming off the call, turning to my husband and saying ‘that might be the most exciting thing I’ve ever heard’. I met Alex and [co-founder] Adam [Hansmann], grilled them for a long time and asked them a lot of annoying questions because it was quite a big decision – we have young kids, The Times is a great place to work, a pretty stable job and I enjoyed everyone I worked with – but this was a once-in-a-lifetime thing and I asked myself ‘could I bear somebody else running it and watching it from the other side?’. The answer was no.

Were your expectations any different to the reality?

At the beginning, you’re so focused on getting started and conscious of what the product was in America, you’ve got something to start with as a structure and you have all these dreams about the pieces you want to do and hire these writers. I’d come from newspapers so I was still thinking like a newspaper journalist to a degree and training your brain to stop thinking like that and start thinking like the product you’re actually working for and running is quite different. The content we produce now is quite different from the content we produced a year ago, and you learn to see what people are interested in and you change.

When it came to recruiting the team of journalists, what was your strategy?

Some of it was incredibly obvious. If you’re going for a Leeds audience and you don’t get Phil Hay, then there’s something wrong with you. He might have said no, but he didn’t thankfully. Likewise, James Pearce at Liverpool and there’s lots of equivalents to that who are the person on their patch. It makes a lot of sense to get them at a local level because they’re really good at what they do and they fit perfectly.

But then, you might not be sure if there is that person or that person doesn’t fancy it, so we really liked the idea of giving a load of young journalists a go. We hired a dozen people who are in their first jobs, which is the bit I’ve enjoyed most in the first year and the bit I’m proudest of. Watching these young journalists, some of who had never attended a press conference and had no contacts in their phone, to breaking little stories and having insiders in the dressing room and relationships with players and managers is fantastic to see. It’s the most heart-warming part of it all.

Where do you see The Athletic’s position in the industry – are you leaning closer to a newspaper or magazine audience?

Every single model, depending on which company you work for, has different priorities and there’s nobody who’s more right, more wrong, more clever. Of course, it’s incredibly different in terms of priorities because we don’t have a set deadline every night to get a newspaper off, for example, and it’s a very different mindset and mentality. That why when we started, I was very conscious that we weren’t a competitor of newspapers. People asked if this was going to ruin newspapers, but I think ‘why?’. Newspapers are still doing great, they’ve got loads of brilliant reporters and, in terms of the UK, covering lots of sport, not just football, and it’s a completely different audience. I never viewed it as a competition thing, if the papers are doing well and the industry is doing well, that’s fantastic.

Some readers prefer the harder hitting newsy stuff, some prefer analysis and some people just want to read soft features. We’re not telling people what to read and we’re producing lots of different stuff, and they’re choosing what to read. That’s the difference between us and newspapers and magazines, we’re not curating it for them. If you wanted us to read more like a newspaper, you can select the things that are more hard hitting, if you want it to read more like a magazine, you can select the writers who are writing the softer features. It’s up to you as the reader.

The Athletic has recently celebrated its one-year anniversary. What’s next for the platform?

Wait and see. There’s all sorts of other things we could do, but any decision we could take we’ll analyse it, what’s worth it, what makes the most sense. Does that mean adding more clubs or different writers or different sports? I don’t have the answers to that. We’ve got a couple of things we’re going to announce in the next couple of weeks, which are really exciting and good additions to what we’re doing. But everyone’s business has been totally bananas because of what’s been going on [with Covid-19], so we’ve got to make sure that after doing really well in this first year from a business point of view, we don’t want to just to chuck money at something unless it’s a worthwhile investment.