Everyone knows you as the Last Leg funny man who made it big during London 2012, but your career started as a football journalist. Was that always your dream?

I realised when I was younger that all I wanted to do was be paid to write about football. I remember writing my first match report when I was 11. It was on Arsenal’s match with Real Zaragoza in the Cup Winners’ Cup final when Nayim scored from the halfway line. Writing about football is all I wanted to do, so I went into football journalism, but realised it wasn’t the world I hoped it would be. That was quite a difficult thing for me really because I imagined it would be a lot more glamorous than it was [laughs]. 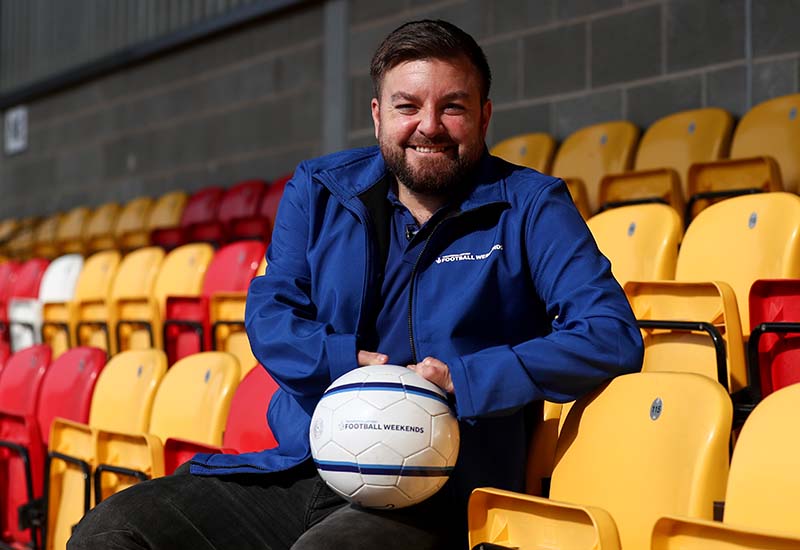 You spent many years working for the Press Association (PA) out of their office in Howden, a small village in the East Riding of Yorkshire. What was that like?

I thought I’d be on Fleet Street straight away and I wasn’t, I was in Howden! All due respect to Howden because it’s a lovely place with lovely people. I was lucky, though, because so many people want to do football journalism, there’s such a big demand with so many people coming out of university, it’s such a desirable job and there’s a lot of competition. I still enjoyed it.

It was weird, though. When I became a football journalist, it was harder to be a football fan. I stopped going to Arsenal as much and I found the hours pretty difficult: working weekends and Boxing Day – I never thought about that before. I had my first Boxing Day off in 2012 and I had to move to Channel Four to do it. That was the real reason for getting into telly, to get my weekends back [laughs].

Did you do any memorable interviews during your time as a journalist?

My first appearance on national television was for Channel Four at the opening ceremony for London 2012. My first interview was David Cameron, who was the Prime Minister, in front of 11.5 million people when I’d never been on telly before. All of a sudden, I’m there interviewing the Prime Minister about five minutes into Channel Four’s coverage – there was a lot of pressure, I was sick before, it was a mad. It was only four questions, but I was just so nervous. Straight afterwards, I went on to interview Boris Johnson and I was away. That was it!

People will see you on TV and won’t believe you suffered so badly with nerves. What was that like?

I can’t describe the nerves, I was shaking before [the interview with David Cameron]. I remember that day being in the hotel, Clare Balding was there and we sat down and had a coffee. I was telling her how nervous I was and she said ‘look, it’s fine, I’ve done this for a long time, you’ll be ok, just be yourself’. And in the end, I think that got me through it.

Even now with nerves, I can tell you that 30 seconds before Last Leg starts, I feel sick every single week without fail, just because it’s live and it’s just before you get going. I don’t think I’ve done any television in the past 10 years where I haven’t felt a little bit nervous, whether it’s live or pre-recorded. A bit of that is because you want to do the best you can. I set myself a high bar of what I try to do.

So how did it go from those interviews to where you are now?

They’re the only two proper interviews I did live on national telly because I went to Last Leg straight away as a reporter, it ended up becoming the show it is now, and now I work in comedy. My last big thing as a journalist was interviewing the Prime Minister, so I kind of bowed out [at the top]. We had Nick Clegg on Last Leg and I did an interview with him, which was more of a sketch, so it’s been a big journey away from journalism now. I still get called a journalist, but I’ve been in telly for 10 years now.

I’d never have imagined [that would happen]. It was meant to be nine days at Channel Four, that’s all. To go from nine days, thinking I was going to go back to Leeds and try to beg for my old job back at PA, to then being 10 years into a career in television, I’ve been extremely lucky. It has been tough as well, though. Channel Four wanted disabled presenters on television, but it didn’t mean they were willing to accept a lower standard. 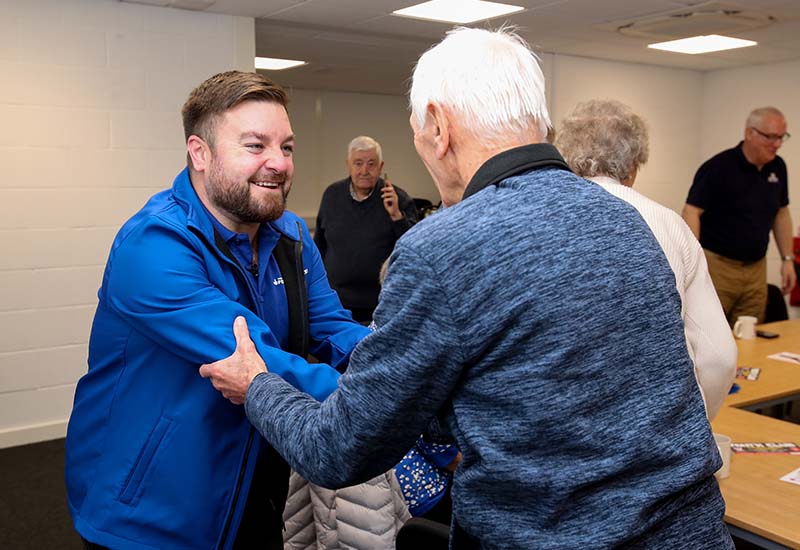 If you hadn’t got your big break on TV, would you still be a journalist now?

I’ll be honest with you, I think I was lazy when I was at PA. I remember going to cover Doncaster versus Cheltenham in the FA Cup, it was a Tuesday night and I was like ‘sod this, this isn’t what I signed up for’. But that’s the nature of it and it’s called working your way up, but I think I expected to go straight into covering north London derbies, although that’s not how the industry works.

I do have a bit of regret that I never reached the level I wanted to in journalism, but at the same time I’ve still had a great time in my career. It’s different and if I was a national football journalist, I’d still think I’d done alright. To do any career for 10 years is good.

Does your story go to show the value of taking advantage of opportunities when they arrive?

Yes, but there is an element of luck being in the right place at the right time – someone giving you a chance. Put it this way, the guy who ended up being the executive producer for the Last Leg at the Paralympics, I sat next to him when I was on work experience at ITV and got to know him through that. You should always be nice and try to make an impression on the people you meet. This guy wasn’t an executive producer when I was doing research for him for ITV Europa League shows.

The journalist background got me ahead of the other trainees at Channel Four because when I was at PA, I co-wrote the official guide for the Paralympics and I’d done all the research. So when I went on to Last Leg, I knew more about all the athletes and sports than the other two, so it actually stood me in good stead because I could always fall back on that knowledge.

So when they said ‘come and be a reporter on Last Leg, do the first 10 minutes of the first show’, I did that. I then talked about my leg with Adam [Hills] and that was it – 10 years later, I’m still there. On Friday, I’m about to do another show – it’s about taking your chance. But being nice to people and working hard at whichever level you’re in [is most important].

You’re supporting the National Lottery Football Weekends campaign that’s giving away more than 100,000 tickets to non-league matches to thank National Lottery players for the £12.5 million of funding their lottery tickets helped to provide community football clubs with during the Covid-19 pandemic. Why is it so important to support grassroots football?

I’ve come to York to see how much the York City Foundation do for their community and it’s the heartbeat of the city. That’s a really big part of it and just because it’s non-league is neither here nor there.

A lot of people support clubs in the Premier League, but it’s important we don’t forget that our local non-league clubs are doing a lot in the community [too]. Especially at times like this when it’s coming up to Non-League Day, it’s international weekend when perhaps your Football League or Premier League club aren’t playing, it’s a good thing to go down and get your fix of football. Also you can have a beer [while watching the game]. I went to Villa Park to watch Arsenal on Saturday in the upper tier and you weren’t allowed a beer up there, which is ridiculous. So that’s a big part of it. Not that I’m promoting drinking [laughs]! 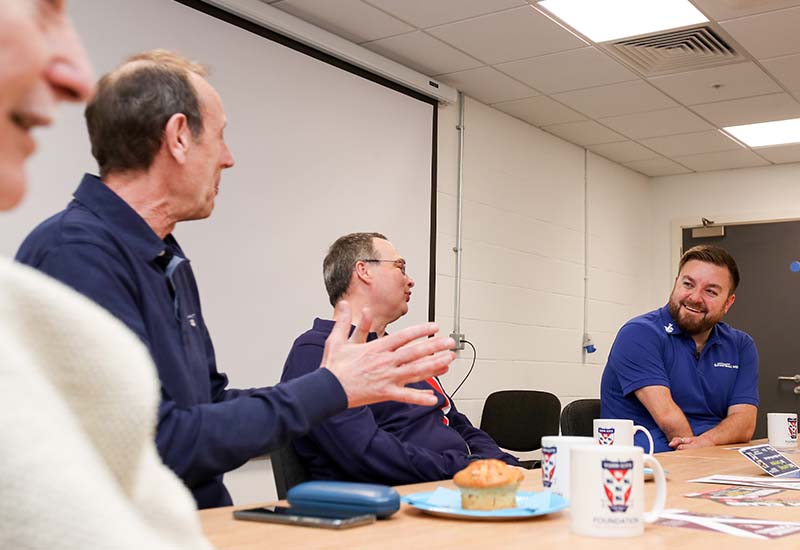 Everyone knows you’re an Arsenal fan, but do you have a non-league team too?

When I was younger, a big thing for me was going to Ashford Town (Kent), that was my local club, so I used to go and watch them quite a lot. These days I don’t even have enough time to watch the Arsenal all the time.

It was amazing when I used to watch Ashford Town when I was younger. When we went on cup runs, it felt like the whole town came out so it was a really big deal. I went to watch us play Watford in the FA Cup first round [in 1996] and that was amazing. That was Vicarage Road, which is a big away ground to go to, but it felt like half the town got on coaches to go out.

My mates have started watching teams like Dulwich Hamlet and Liversedge too. Sometimes for us it’s all about the Premier League, but these local clubs [are important] and they do so much for the community.

What is it about non-league that appeals to much?

Sometimes in the Premier League, I don’t like what I see anymore: VAR, the money that’s involved and things like that. I feel like in non-league, it reminds you what football is all about. Sometimes it feels a little bit more real. Some of the stuff I see in the Premier League week in week out… it comes back to VAR and Jesus Christ, do you know what I mean [laughs]?

The National Lottery Football Weekends campaign will make over 100,000 tickets available on a ‘Buy One Get One Free’ basis for National Lottery players for selected matches as a ‘thank you’ for over £12.5million of funding they helped provide to community football clubs during the Covid pandemic. To find out more visit www.thenationallotteryfootballweekends.co.uk