It’s hard to give up something you love. Blackpool fans know this all too well. At 3pm on a Saturday, as their beloved club attempt to climb up into the League Two play-off places, most Seasiders will actively forgo the trip to Bloomfield Road.

Some stay away only out of apathy; plummeting from the Premier League to League Two in six years will cause a decline in attendances. But for others it’s an act of defiance. Following years of protest, anger and open revolt against the Oyston family, Blackpool’s owners, thousands of fans have pledged not to give the club a penny more of their money.

Bar 1 on Bloomfield Road proudly boasts that it’s the closest watering hole to the stadium, but half an hour before kick-off on matchday it’s eerily quiet, and the only football colours on show are those of Man United and Tottenham. The impact of the boycott is clearly being felt, although perhaps not just by its intended target. “I think the Oystons have ripped the heart and soul out of the club,” says Martin behind the bar, who displays an ‘Oyston Out’ scarf on the back counter.

The scale and longevity of the protest is remarkable, but it is best appreciated once you are inside the stadium. Vast expanses of tangerine seats surround the pitch. The East Stand, constructed when Blackpool achieved promotion to the top flight in 2010, is completely empty except for a couple of ball boys and the press pack. Were it not for 198 travelling Colchester fans, the Mortensen North Stand would be empty too. It’s easy to forget, looking around a stadium less than a quarter full, that Blackpool is one of English football’s most famous old clubs. The atmosphere is like a funeral. 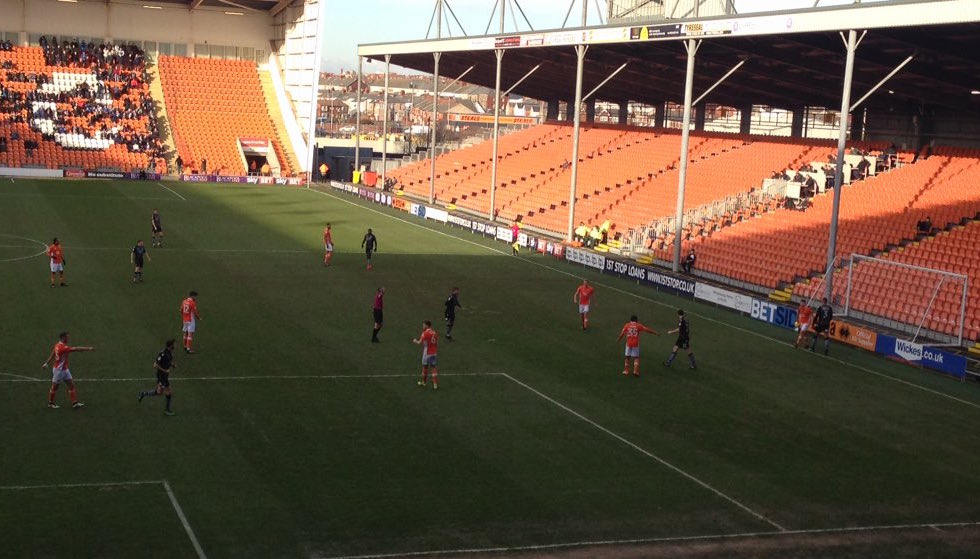 Next month a decision is due in a court dispute between club president Valeri Belokon and the Oystons, with the Latvian claiming he is owed millions that he invested in the club’s run to the Premier League. There will no doubt be more eyes on that than this League Two fixture.

It’s the lowest gate of the season at Bloomfield Road, but the 2,772 fans in attendance (as was the official figure – it seems much less) are right behind the players and manager Gary Bowyer. Blackpool are the better side for long periods against Colchester, leading to boisterous chants of “Sea, Sea, Seasiders” among the scattered few in the Jimmy Armfield Stand.

The fans’ love of their club is enduring, but it’s difficult to see light at the end of the tunnel. Francis Walmsley is one of the few Blackpool fans in Bar 1, and is naturally a staunch anti-Oystoner. But he doesn’t see any hope of success for the boycott. “I agree with the fans who don’t go, because they want to get rid of [the Oystons], but as I see it [they are] not going to sell the club,” he says.

“Who would want to buy it? It’s a busted flush. I’d rather go than stay away. I’m 80 years old now, if I stay away I’m worried I’d never see them again. Even though we’ve been rubbish these past few years I still enjoy going and I always will.”

That phrase ‘busted flush’ was used by Karl Oyston himself the previous week, but to describe the protesting fans rather than the club. He told TalkSport radio: “They are people with no alternatives, nothing to offer and just want to criticise, deride and abuse the proper fans that come into the ground. Their numbers are dwindling, the interest is dwindling and they’re a busted flush. They have nothing to offer and you can only go on for so long trotting out the same tired rhetoric before they get bored of it.”

Another Blackpool fan, David Clarke, sympathises with the ‘Not a Penny More’ campaign, despite deciding not to follow the protest unconditionally. NAPM encourages supporters not to give any more money to the club while the Oystons are still in charge. While David has chosen not to boycott, he abides by the principle to an extent, refusing to buy any drinks, food or souvenirs at Bloomfield Road on top of his match ticket. “I still go to the protests, and I definitely want [the owners] out, but I don’t think it’s getting anywhere,” he says. “They’re just laughing at them.” 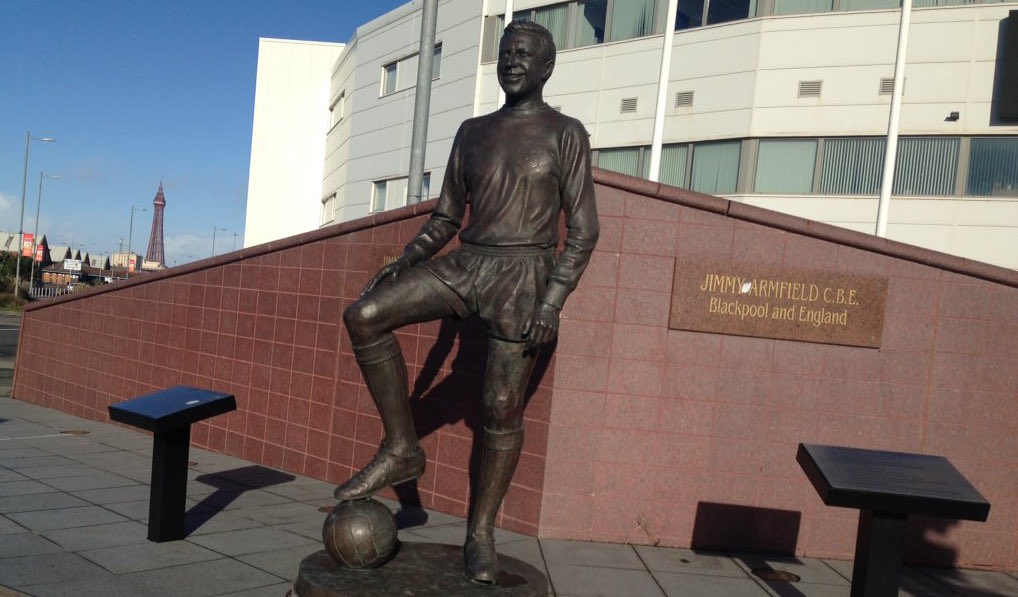 A week on from a joint-protest between Blackburn and Blackpool fans at Ewood Park, in which a rain-soaked demonstration and shower of tennis balls grabbed a good deal of media attention outside of Lancashire, this is back to the grind of weekly protest. Outside the Jimmy Armfield statue, Blackpool Supporters’ Club deputy chairman Christine Seddon is handing out flyers, urging away fans not to spend any extra money on programmes and pies.

“We feel that the Oystons have ripped the heart out of our club and wrenched it from the local community,” she tells them. And Seddon remains optimistic about the impact the boycott is having, despite Karl Oyston’s insistence that he won’t sell up. “I know the boycott is doing something. It’s making a huge difference and I think anybody who says it isn’t is either naïve or has their own agenda. A football club with only a handful of fans paying to go each week is unsustainable long-term.”

Those who stay away on Saturday miss a lively game, in which the Seasiders are largely the better side. The plummeting attendances appear not to have had a disastrous effect on the team, but it is easy to feel sympathy for Bowyer and his players, who are caught in the middle of this protracted stand-off.

In the end, Blackpool are frustrated by their visitors from Essex and can only manage a 1-1 draw, a major setback in their hopes of achieving a play-off berth. But as ever, events off the pitch generate more discussion than those on it. Keeping the momentum and defiant spirit of this protest going is imperative for it to be a success.