The trafficking and abandonment of footballers is a cruel practice that makes a mockery of young players’ dreams. It’s an issue that predominantly affects Nigerians, along with those from other African nations.

The practice involves a fake agent persuading a young player to pay them anything between £1,000 and £8,000 so that agent can take them to another country where a professional football club is waiting to sign them. The fee pays for the flights, accommodation, contracts, and crucially the player’s visa.

Once the player arrives in their new country, the agent flees with the rest of the money and cuts all communications. More often than not, it turns out the visa that the agent paid for is very short-term, sometimes as little as three days. Suddenly the player is an illegal immigrant and penniless through no fault of their own.

The money paid to the agent has been scraped together by the player’s family and friends, with the understanding that they’ll make the money back tenfold as a professional footballer. This creates an immense level of shame for abandoned players. Many choose to stick it out and either build a life for themselves away from home or keep chasing their footballing dreams despite the setback. 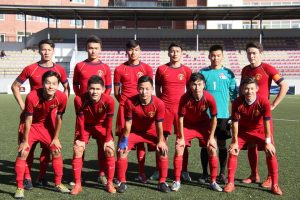 Someone who has seen the effects of this practice firsthand is former Mongolian football club owner Paul Watson. He owned Bayangol FC (pictured above) between 2013 and 2017, and ended up helping African players who had been abandoned in Mongolia by a fake agent.

From Watson’s experience, it’s extremely rare for agents to be prosecuted for this crime. Mostly because of the legal distance they put between themselves and the players.

“You’d have struggled to prosecute this guy because I’m sure he had no bond to the players at all,” Watson explains. “He wouldn’t have spelled out in a contract that he had any duty to them.”

With the players suddenly finding themselves in an illegal position, they’re very unlikely to pursue the agent in a legal capacity as they run the risk of indicting themselves. In terms of tackling the issue, this is something the host countries must be more accommodating of.

The majority of trafficked players come from Nigeria, but there isn’t actually a Nigerian embassy or consulate in Mongolia. Watson thinks there should be some sort of safe place for these players to make their case known.

“They should have a responsibility to players arriving in their country,” he says. “In Mongolia the FA should have something where any foreign player who’s registered should have a port of call who they can go to with any kind of problem like that, where they know they won’t be prosecuted.”

The names of some prominent fake agents have been uncovered in the past. FIFPro recently published a blacklist with the names of individuals confirmed to have been involved in the trafficking and scamming of footballers. It appears over the past year they have made a concerted effort to tell people’s stories on their website and spread awareness of fake agents.

This is a useful resource for young players with the guidance and ability to access the information, but many victims don’t have the privilege of the internet. 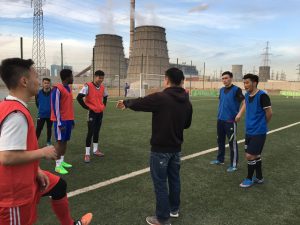 FIFA tends to get blamed for almost everything that’s wrong with football. More often than not that blame is completely just. For this issue, it feels as though rather than do anything obviously wrong and detrimental, they’ve just ignored it.

The rules around how to become a football agent have always been hazy, and leaves the door open for chancers and pretenders to try their hand at making some quick money.

After all, we’re always hearing about the millions of pounds Mino Raiola and Jorge Mendes make from representing footballers.

Without wanting to blame FIFA outright for the problem, Watson feels they ought to be doing more.

“It’s a problem that doesn’t really fall under anyone’s jurisdiction and I think FIFA slightly wobbled out of this when it decided to not really have rules around agenting so much,” Watson explains.

“People can call themselves an agent without any real qualification to be one and it was reasonably difficult to say who’s a legitimate agent and who isn’t.”

The other option is to try and educate players of these risks before they get approached.

Players could be given materials by their countries FA’s about what to look out for from fake agents, but Watson explains why this is likely to have a minimal effect.

“There’s a sense of, it’s very hard to talk players out of paying the agent because it’s not what they want to hear.”

This is an important factor. Few young players who think they’ve discovered an opportunity to start their football career are going to be talked out of it again.

It’s a problem that in order to be solved requires cooperation from multiple organisations and individuals. FIFA could tighten regulations on agenting.

Countries such as Mongolia could take more responsibility for players who find themselves abandoned there. Countries such as Nigeria could educate their young footballers more actively and the dangers of fake agenting. In order for a clear change to happen, all of these things have to happen in unison.

Euan Burns writes for immigrationnews.co.uk, a media platform that helps to raise awareness about migrant injustices and news around the world.