They have set a high bar for the amazing over in Swansea, but Saturday’s 2-1 win over Manchester United cleared it with room to spare. A fortunate victory, perhaps, given that it was earned via the back of Bafetimbi Gomis’ head, but one that effectively secured Premier League football for next season and that completed an unprecedented double over Louis van Gaal’s side.

You worry sometimes that they are now so used to success in South Wales that it might soon go to their heads. That like Charlton Athletic ten years ago, a section of their supporters will flood the phone-in shows, begging for a new manager who might, “take them to the next level.” After all, there are few stories in modern football quite like this.

The legend is so familiar that you could recite it without notes. In 2003, after a long period of instability and the very real threat of extinction, Swansea avoided the trapdoor to non-league with a last day 4-2 win over Hull City. In 2005, they said goodbye to the basement division and then hello to the all-new, all-seater Liberty Stadium. In 2008, they won promotion to the Championship. In 2011, they arrived in the Premier League. In 2013, they won the League Cup. If you did that on ‘Football Manager’, you’d suspect that the match engine needed to be patched. In real life, with the hysteria that characterises modern football, you fear that the common sense that has taken the club so far will be swamped by rising levels of expectation.

And yet there is a profound contentment at this club that suggests this will not be the case. Manager Garry Monk may have seemed a risky choice to replace Michael Laudrup, but he has gently ushered the team back to the core values of hard work and stylish football that had served them so well. Monk made a concerted effort to mask his own satisfaction on Saturday, preferring to praise everyone connected with the club for their efforts, but he must be delighted with what will be his first full season in football management. In his most optimistic moments, could he ever have imagined that he would twice get the better of Louis van Gaal?

Behind the scenes, the owners keep a tight ship. Retaining the bulk of the Wilfried Bony money looked like another gamble in January, but now they have the rest of the season to consider how best it could be spent. It’s that sort of thinking that has led to the club posting back-to-back profits as turnover skyrockets on the back of increasing TV revenue. According to financial analysts Deloitte, Swansea are now in the top 30 highest earning football clubs on the planet. Again, it’s worth repeating that it wasn’t that long ago that they were scrapping it out with the likes of Southend United in the fourth division.

Not that the Swansea fans need reminding. Before the game, one supporter recollects the day that the Shrimpers secured promotion to the Championship at the Liberty Stadium, back in 2006. He is far too polite to mention the dramatically different directions our two teams have taken since then.

After full time, the stadium empty, I chat with a steward about that rise through the divisions and, even though he must have had this conversation a thousand times, he still shakes his head in blissful wonderment at all.


“It’s those boys up there,” he says gesturing to the director’s box. “Jacks, all of ‘em. Played for the schoolboys. Watched them as kids. Mind you, so did we all here.”

“We’re not supposed to show bias when we’re working,” he says leaning in conspiratorially, “but we bloody love it!” 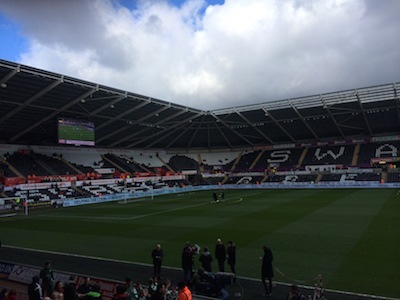 The story shouldn’t end here. Monk immediately called for the players to keep their standards high even though there is little drama left in their campaign. “This week was perfect in terms of how the group worked, but we need that week after week,” he said.


Off the field, the plans are just as ambitious. “Positive, exploratory,” talks continue with the local council as the football club seek to buy the stadium for themselves. An expansion has been approved that will take capacity from 21,000 to 33,000, granting the 8,000 people on the waiting list for season tickets a chance watch their team.

It is rare in football that you will find the perfect trinity of owners, fans and local politicians working in harmony for the good of the community. You just hope that no-one loses their head now.

Swansea supporters, are you happy with the progress your club has made or do you want Monk sacked and replaced with Rafa Benitez or Harry Redknapp in order to support a drive to the Champions League? We don’t do comment boxes, so write to us by clicking this or emailing [email protected]