It is nearly six and a half years since American businessman Ellis Short first gained control of Sunderland. Sometimes, he must wonder why he bothered. After six managers and millions of pounds of investment, the club is exactly where he found it; hovering precariously above the relegation zone.

You can criticise manager Gus Poyet for many things, but you can’t deny that he made a good point when he suggested that Sunderland have always been rubbish. It’s not strictly true, they were pretty decent in the 1930s and they dominated the end of the 19th century, but you can see where he’s coming from. What you can’t see, sadly, is where he’s going.

Poyet claimed in the match day programme that he thought everything was coming together, but after full time he said that he was miles away from what he wanted. Little wonder that there’s so much confusion in the ranks.

Over 45,000 fans packed the Stadium of Light on January 10, an extraordinary figure on a number of levels. Sunderland haven’t won a major trophy since 1973, their highest Premier League finish is 7th and, since returning to the top flight in 2007, they’re yet to finish higher than 10th. Though Liverpool remain a good draw for non season ticket holders, this was essentially a mid-season clash between a lower mid-table side and an upper mid-table side. And let’s not forget that it was bloody freezing on Wearside on Saturday.

It’s a searing indictment of modern football that this phenomenal level of support is relatively meaningless in terms of providing the necessary resources to compete at the top of the table. According to figures for the 2012/13 season, Sunderland made just £13m on match day revenue. Chelsea, with an average attendance only marginally higher, made £71m. Never underestimate the power of corporate boxes and London-priced refreshments.

That leaves Short in a difficult position. Unless someone discovers oil underneath Cleadon Village, and ushers in a transformation of wages and living standards that resonates for generations, it seems unlikely that Sunderland will ever be able to match the revenue streams of the other major clubs. Huzzah for modern football!

So what do you do when you can’t sign the big players? You give yourself the best possible chance to cultivate them yourself. In this department, Short has impressed. As well as investing in the playing staff, he’s invested in the infrastructure too. Sunderland boast one of the finest training centres in the land and the academy is of the highest grade. The foundations for self-sufficiency have been laid. It’s the brickwork on top that’s making the neighbourhood look bad.

“The issue is recruitment,” said Chris Thompson of A Love Supreme. “Short is a self-admitted football dunce, he relies on the guidance of others and so far you can’t say that any of the footballing decisions made by his delegates have been particularly good. We’re pushing on for a decade in the Premier League and we’re still plugging away trying to beat the drop. The issue is progression, or lack thereof.”

The upheaval certainly hasn’t helped. No Sunderland manager has overseen more than 100 games since Mick McCarthy’s departure in 2006. Poyet has been tasked with constructing something coherent with the fragments of the Steve Bruce, Martin O’Neill and Paolo di Canio squads. But already the pressure on him is growing.

“The fans are starting to turn on Poyet,” said Thompson. “The most common criticism is that his system is boring, unimaginative and that he refuses to try new things. In that respect he could be likened to Martin O’Neill, albeit while playing a much different style of football. I’m still firmly behind Gus and I do believe him when he says that playing his way takes time to learn. There’s a lot of pressure though, not just on Poyet, but also our recruitment staff and Sporting Director Lee Congerton. The jury is still out on him.” 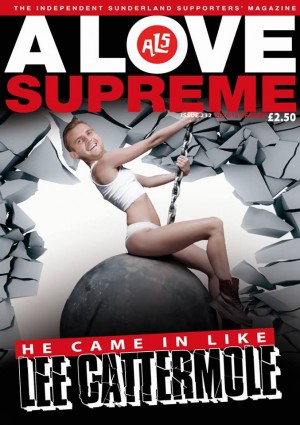 Any more performances like the mess they sicked up on Saturday and both men will be in danger. Ordinarily, you would say that the last thing Short needed was yet more upheaval in the dugout. But watching the limp, incoherent and wretched flailings of Poyet’s Sunderland on Saturday, it’s hard to argue that it could get much worse.

Short will have expected far more than this for his money. In that regard at least, he and the Sunderland supporters are of one mind.

Are you a Sunderland supporter? Do you need a cuddle? Would you like to talk about it? Email [email protected] now.

For more details on the always excellent A Love Supreme, click here.