International footballers are in high demand and for an interview with one to be delayed isn’t a big surprise. But for the reason to be because they were working on a server upgrade is unusual.

Luke Paris lives a remarkable double life. Normally an IT worker for a logistics company in Maidenhead, yet occasionally an international footballer who plays in front of tens of thousands of people in Central America.

As a centre back in an Anguilla team currently 210th and bottom of the FIFA World Rankings, there’s been plenty of work for Paris on his five international appearances to date. A 10-0 defeat on his debut wasn’t even the worst result. 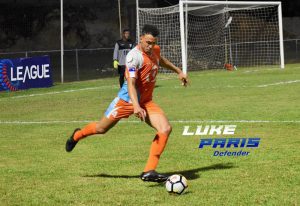 Paris was born in the UK but his Anguillan grandmother provided a link to the small British Caribbean territory. He fondly recalls long childhood holidays visiting extended family and enjoying the pristine beaches there.

Hearing, as a 24-year-old, he was being called up for international duty by the island – which only joined FIFA in 1997 and has a population of around 15,000 (less than a quarter of Maidenhead’s) – was a surreal moment.

“It’s amazing to get the opportunity to fly out there, represent the island and have family come to watch me at the national stadium,” Paris says.

This past season Paris has been in and out of the Langley FC team in Hellenic League Division One East in English football’s tenth tier, which ordinarily wouldn’t be a natural springboard into international football.

Due to Anguilla’s limited football infrastructure though, the island’s FA is keen to involve players who ply their trade at an organised level in England. Paris’s opportunity presented itself through connections of his father, Alan, a right-back who played for Peterborough, Leicester and for a year in the top flight with Neil Warnock’s Notts County in the early 90s.

Paris isn’t alone in getting an unlikely international call. At least six players from England’s non-league have recently been called up by Anguilla, including the defender’s cousin Calvin Morgan.

The first contact Paris had with the Anguillan set-up came last August when he received a call from national team manager Nico Connor. After introducing himself and outlining his football experience, Paris was offered the chance there and then to represent the island, leaving him pinching himself.

Paris talks about how he savoured every little detail before making his international bow, with the anticipation rising as a letter from the Anguillan FA was followed by emails with flight and hotel details.

He found himself reining in his excitement at work as dropping news of an international call-up into everyday office conversations can cause jaws to drop.

“I didn’t want to shout about it from the rooftops, but I told a few colleagues as I was very excited about the opportunity,” he says. 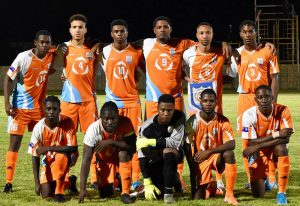 That his annual leave wouldn’t fully cover the international calendar could have been a stumbling block. There can be few corporate HR guidelines that address international footballers, after all. After he showed the letter confirming his call-up, his employer, Maersk, was more than happy to grant him leave to play.
The five international appearances so far have been eventful for Paris. Despite a long grounding in football – once playing against a young Raheem Sterling at an academy the non-leaguer’s father ran – the international game has already placed him against opponents at another level to what he’s used to in tenth tier.

Ahead of his debut away to Guatemala in September, he found himself researching the opponents on the internet.

“We took a look on Wikipedia and Soccerbase just to understand them and where the threats were going to come from,” Paris recalls.

Ominously, Guatemala were ranked as the eighth best of 41 teams in the Concacaf Nations League and had only been paired with Anguilla in League C as a punishment for missing the qualifying event due to a brief FIFA suspension.

Training on a perfect pitch, being mobbed by local kids and having hostile home fans greet the team bus at the stadium in Guatemala City plunged Paris straight into life as an international footballer. There were cameras, flashing lights and noise way beyond what he experiences in the non-league game.

It proved to be the hardest match of Paris’s career due to the technical ability of the quick-passing Guatemala side. After conceding two early goals, Anguilla kept the hosts out until the 37th minute, but Los Chapines proceeded to make the difference in class apparent and ran out 10-0 winners.

A pair of home fixtures followed for Anguilla a month later. A return match against Guatemala marked some progress, with the host making more of their physical advantage to reduce the arrears to only 5-0.

Anguilla were losing 3-0 at home to Puerto Rico in their next game when a spell of late pressure gave the hosts two consolation goals, to the delight of the fans and players. Given Anguilla have won just one match in the past 20 years, against Saint Martin in 2010, getting a goal or two is rightfully seen as an achievement to build on.

“We showed the kind of grit and determination against Puerto Rico that many people thought we didn’t have. Morale was really high after that,” says Paris.

The brutal reality of life at the bottom of the FIFA rankings was brought back in Paris’s next appearance, however, a friendly away in Trinidad in November.

The hosts were five up after 21 minutes, led 10-0 at half-time and proceeded to win 15-0. Paris has learned to be philosophical about these thumping defeats, saying: “Of course it hurts to come back and have to tell everyone we lost by a double-figure score. Trinidad are one of the highest-ranked teams in the Caribbean though, and we had a weakened side out.”

Indeed, Trinidad are currently more than 100 places above Anguilla in the FIFA ranking.

A 3-0 defeat in Puerto Rico followed to leave Anguilla bottom of their Concacaf Nations League group. World Cup qualifying is due to begin in September, with Anguilla’s hopes limited but Paris providing a positive outlook.
“If I can get my first international win at some stage, that would be incredible,” he says. “We need to aim for that and take it from there.”

When Anguilla next face islands of a similar size, Paris is convinced a win is achievable. Its limited population pool is a point worth emphasising – Puerto Rico might also seem like footballing minnows, but their population of 3.2 million is more than 200 times larger than Anguilla’s.

While Anguilla might seem to be permanently up against it, once you’re right at the bottom of the FIFA rankings, the only way is up.

The island is making plans it hopes can allow it to take a tentative step or two up the international ladder. Nico Connor is a likeable coach known for his motivational manner and the Anguillan FA is keen to put the funding it receives from FIFA to good use by developing the country’s footballing infrastructure.

It recently pledged $300,000 to make new football pitches on the island. There is also talk that Anguilla might be able to follow in the footsteps of Guyana and Montserrat by scouting more widely for players with links to the island in the UK – or elsewhere in the world – to boost the quality of their squad.

In the meantime, with football currently suspended, it’s back to the day job for Paris and focusing on infrastructure upgrades and cybersecurity. Challenges in themselves, but a bit different to contending with international strikers desperate to leave you in their wake.