THE SIGNIFICANCE: Dinamo win comfortably at the home of their Zagreb rivals, continuing their 11 month unbeaten streak as they prepare to host Arsenal this week in the Champions League. 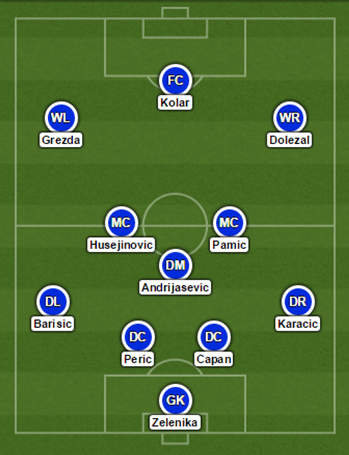 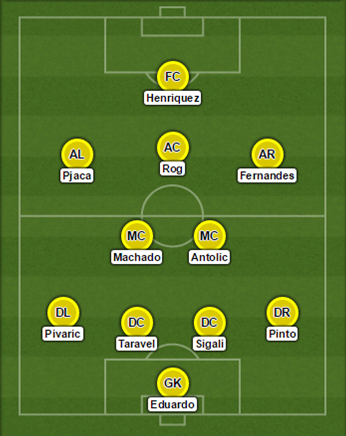 Zagrebački derbi. The Zagreb derby. Lokomotiva vs Dinamo. It’s no ‘eternal derby’, the name given to the prestigious clash between Hadjuk Split and Dinamo, but it’s a derby nonetheless and nobody wants to lose it. Except Lokomotiva do lose it. A lot. The numbers aren’t pretty for the side founded in 1914, who haven’t beaten their city rivals in their last 18 attempts, losing 17 of them. But hey, at least they’ve drawn one. Dinamo on the other hand, love playing their city counterparts, scoring 42 goals against them and only conceding 12 since 2009. No prizes for guessing who the favourites were heading into this one.

Regardless of the occasion, Dinamo, managed by Zoran Mamic, would set up in their favoured 4-2-3-1 formation, because if it isn’t broken then why fix it? Leading the line for The Blues was the summer signing from Manchester United, Angelo Henriquez. The 21 year-old Chilean moved to the capital this summer, scoring two goals in five matches prior to the derby and was clearly eager to make an impression for his new employers. In support of Henriquez was the powerful Marko Pjaca on the left, Marko Rog floating in the hole with the skillful Junior Fernandes, latterly of Bayer Leverkusen, on the right. The slightly deeper midfield duo would be Dinamo’s all action captain Domagoj Antolic, also formerly of Lokomotiva, beside the silky former Portuguese international Paulo Machado. In contrast to Lokomotiva, the Dinamo back five would be slightly more experienced with Eduardo (32) in goal, Ivo Pinto (25) at right back, Leandro Sigali (28) and Jeremy Taravel (28) in the heart of the defence accompanied by Josip Pivaric (26) at left back.

Lokomotiva, under the instruction of Ante Cacic and realising that they haven’t had the best of luck against Dinamo of late, deployed a defensive 4-3-3 formation. The trio making up the forward line in Marco Kolar, Eros Grezda and Jan Dolezal was a youthful one, with Dolezal being the oldest of the bunch at 22 years of age. They may be inexperienced, but they’ve hit some modest form so far this season scoring seven goals in nine matches between them prior to their mission to trouble the seemingly invincible Dinamo backline. Interestingly, every member of the Lokomotiva midfield has, or has had an involvement with their derby opponents. Said Husejinovic and Zvonko Pamic are both on season-long loans from Dinamo, whilst Franko Andrijasevic moved to Lokomotiva from the club last summer. Youth was again the flavour of the back five, with Oliver Zelenika (22) in goal, and Fran Karacic (19), Luka Capan (20), Dino Peric (21) and Borna Barisic (22) given the tall order of trying to stop the Croatian champions.

The start of the game was scrappy, but Dinamo soon began to take control of the ball, passing the ball crisply and quickly between the lines. The first chance of the match would fall to the away side in the 10th minute, after some organised pressing in midfield saw Antolic nick the ball off Barisic in the Lokomotiva half before launching a counter attack. After playing a one-two with Henriquez, Antolic found himself in plenty of room just inside the area, but dallied on the ball allowing Husejinovic to make a block as the ball trickled out for a corner. The goalkeeper was not worked, but this would be a sign of things to come.

As the game trudged on towards the half hour mark, passes weren’t quite finding their designated targets and the match was disrupted by multiple fouls that prevented any real rhythm. Chances were few and far between.

The first opportunity of the match came in the 34th minute, and provided the first goal. After some neat play between Machado and Antolic in midfield, the Dinamo left back Pivaric steamed down the flank on the overlap. Antolic then found the Croatian as he latched onto the ball before putting in a beautiful cross, finding the forehead of Henriquez, who subsequently found the bottom right hand corner. The deadlock was finally broken, much to the displeasure of the home fans as the men in yellow shared hugs and high fives.

Despite going a goal down, Lokomotiva did not let their heads drop and were organised in defence, often calling their wingers back into a 4-5-1 formation. While they weren’t creating much, keeping the score at 0-1 allowed them to remain in the game as they looked for a set piece or a moment of brilliance to level proceedings.

The next goal was always going to be crucial, and unfortunately for Lokosi, it again fell to the away side. In the 64th minute, after Lokomotiva failed to clear a Dinamo corner, Pivaric, who was so influential for the first goal, pounced on the ball. Just to the left of the 18 yard-box, he played a smart one-two with Pjaca which put him in behind the tired back four. After a quick look up, his drilled cross into the centre found the onrushing Henriquez who finished easily on his left foot to grab his second of the game. The beat of a drum and synchronised voices continued to bellow from the terraces, but Cacic’s men were left with a mountain to climb with half an hour to play.

Dinamo were in full control now, and just five minutes later they added a third. After some nice one touch passing in midfield, right back Pinto delivered a teasing cross into the box towards Machado who had ventured forward from deep. The former Toulouse and Olympiakos midfielder was actually fouled as he attempted to chest the ball down, but it fell kindly to Junior Fernandes who struck a sweet half volley right into the bottom left corner of the goal from a tight angle.

It wouldn’t end there, as four minutes after their third goal, they added a fourth. If they weren’t dropping earlier, the Lokomotiva heads had certainly dropped now, as Sigali found himself unmarked in the six yard box to head home another Pinto cross. Three points were in the bag for Dinamo as they opened up a two point lead at the top of the table, ahead of second placed HNK Rijeka.

After taking a little while to get going, Dinamo ran out comfortable winners in the end, stretching their unbeaten run to 41 matches in all competitions. Their quality in midfield was too much for Lokomotiva in the end, who fought valiantly until, exhausted by their efforts, they fell apart in the closing stages.

Zoran Mamic and his team welcome Arsenal to Zagreb this week and this time they’ll be the underdogs. Defender, and scorer of the fourth goal, Sagali, has warned the Gunners to be careful. “At a full Maksimir Stadium we are confident,” he said. “Arsenal need to take us seriously or they are in for a surprise.” Given that their last home defeat was on November 6, 2014, he may have a point.