THE SIGNIFICANCE: First vs second in the Bundesliga, as Bayern cut Dortmund back down to size after their impressive start to the season. 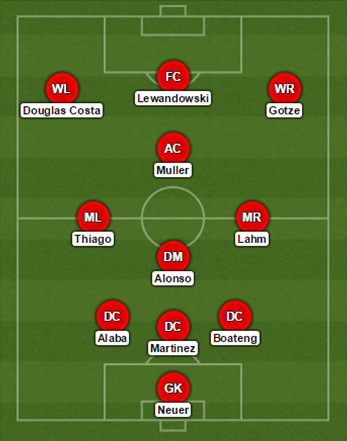 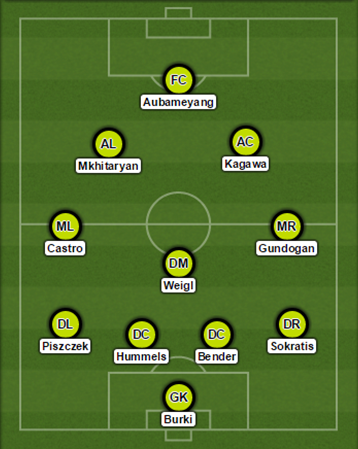 Der Klassiker is back. Last season Bayern beat Dortmund twice in the Bundesliga and finished a whopping 33 points above them. Not a Klassic year. This season it looked to be a very different story, with the two clubs occupying first and second place after excellent starts to the season. This was also the first Klassiker for Thomas Tuchel, newly installed as manager of Dortmund. So it was bound to be a tighter affair…

Bayern, under the calculated madness of Pep Guardiola decided to set up in a 3-3-1-3 formation as they looked to put seven points between themselves and their opponents. In goal was sweeper keeper extraordinaire Manuel Neuer, with David Alaba, Jerome Boateng, and Javi Martinez making his return from an 18 month injury lay-off in the back three. If you’re going to play a back three in a match of this magnitude, you’d have a hard time finding better options. The deepest lying midfielder was Xabi Alonso, who was tasked with spraying passes effortlessly left and right, and he was accompanied by the grace and excellence of Thiago and Philipp Lahm either side of him. Thomas Muller, the ‘Ramdeuter’ or ‘space investigator ‘(ED’S NOTE: This sounds like a brilliant pitch for a TV show), was deployed behind Robert Lewandowski who went into the match on top form with an astonishing ten goals in his last three games. As if that wasn’t enough, summer signing Douglas Costa and Mario Gotze occupied the left and right wings in a perfect blend of explosiveness and finesse.

Dortmund, veering away from the 4-1-4-1 formation that had been so successful this season, opted for a 4-3-2-1 instead. In goal was Roman Burki, who has impressed since his arrival in the summer and is keeping veteran Roman Weidenfeller out of the side. In a makeshift back four, Sokratis slotted in at right back which meant Lukas Pizsczek moving to left back in place of the injured Marcel Schmelzer. In the heart of defence, the assured Mats Hummels was partnered by the industrious Sven Bender who usually plays as a defensive midfielder. Potential banana skins already. Julian Weigl, whose careful passing style combined with his ability to read and intercept danger has become invaluable to the balance of the side, sat deepest in midfield with the energetic duo of Gonzalo Castro and Ilkay Gundogan just ahead of him. Henrikh Mkhitaryan and Shinji Kagawa have looked revitalised under Tuchel and were given slightly more attacking freedom, slotting in behind the rapid Pierre-Emerick Aubameyang who like Lewandowski, is in excellent goalscoring form.

The first chance of the game came midway through the first half, when Douglas Costa skipped past Sokratis with ease. His shot was palmed back to him by Burki who had Piszczek to thank for heading the ball away when it was swiftly returned. The men in red were just beginning to warm up.

Bayern’s breakthrough came in the 25th minute. With Boateng in possession of the ball just inside his own half, Muller, loitering with intent in between the two Dortmund centre halves, smelled blood. The Schwarzgelben line was high and wayward, and the space was duly investigated. A perfectly timed run matched with a delightfully weighted pass from the centre half saw Muller bearing down on goal, before tipping the ball past the stranded Burki. After composing himself, he slotted the ball into the empty net as Piszczek and Bender’s last ditch attempts to block the ball were futile. And Bayern were only just getting started.

Just ten minutes after conceding the first goal, Dortmund gave up another when Mkhitaryan clumsily brought down Thiago in the penalty area. Muller sent the ball low into the bottom right hand corner as Burki went sprawling in the opposite direction. 2-0.

Dortmund gave themselves a lifeline two minutes later when some neat play from Mkhitaryan saw Castro freed down the right hand side. The former Bayer Leverkusen midfielder’s inch perfect low cross was met by an unmarked Aubameyang at the back post, to put his side back in the match as well as maintaining his record of scoring in each every one of Dortmund’s Bundesliga games this season.

Dortmund might have equalised before half time when Aubameyang raced clear five minutes before the break, but Javi Martinez brilliantly intercepted the Gabonese international’s cross just as Mkhitaryan was waiting to pounce. Having dominated the opening exchanges, Bayern were pleased to get down the tunnel with a one goal lead.

If Dortmund felt that the tide had turned, they were very much mistaken. Thrity seconds into the second half, it was 3-1. Again, Boateng was the instigator after another ball over the top caught Hummels and Bender off guard. Lewandowski raced clear looking to control the ball coming over his shoulder. Burki raced off his line to greet the forward, but provided no resistance, missing the ball completely and leaving the Pole with the simple task of smashing the ball into the open goal for his 11th of the season. This goal brought an uncomfortable reminder of last year’s defensive difficulties under Klopp, something Tuchel will want to iron out quickly.

In desperate need of a route back into the game, Marco Reus and Adnan Januzaj were brought on by the Dortmund boss in the 53rd minute, who should have been done and dusted when Muller sent a low cross to Gotze who, with the goal at his mercy, somehow scooped the ball over the crossbar from five yards out. For obvious reasons, the Dortmund fans particularly enjoyed that.

But it was Gotze who would have the last laugh. In the 57th minute, his gorgeous pass into Lewandowski saw the striker continue his fine form with a clinical left footed finish from ten yards. Lewandowski wheeled away with his finger pointed to Gotze, both former Dortmund players, of course. No-one in the away end was laughing now.

Mkhitaryan snatched at a shot with only Neuer to beat as the away side tried to salvage something from the game, but it was Bayern and Gotze celebrating again after the midfielder added a fifth in the 66th minute from just inside the penalty area.

Dortmund continued to rally, but a tame Januzaj free-kick was the best they could offer, as Bayern claimed another convincing victory. This was the third time in four matches that they have scored five goals, and they were simply too much for Dortmund to handle. And all this with the likes of Arturo Vidal and Kingsley Coman on the bench, not to mention Arjen Robben and Franck Ribery still to return from injury.

After the game, Tuchel was humble in defeat. “Firstly, congratulations to Bayern for the deserved victory. We knew we had to play on the highest level, but we didn’t get it done on the highest level and got penalised with another long ball. I felt it was done after the third goal but we have to accept we simply weren’t good enough today.”

Already having opened up that seven point gap, Guardiola was keen to quash expectation. “In October, nobody is crowned champion. I am honest, Dortmund did not play like a team who are seven points behind us. Against Darmstadt and Hoffenheim we got lucky with the victories. Right now, we remain grounded and I hope that our players are back healthy after the international break.”

It may only be October, but a record fourth straight Bundesliga title looks increasingly likely already.