THE MATCH: Albania vs Portugal

THE SIGNIFICANCE: Portugal snatch a late victory away in Albania to go top of Group I, leaving the home side in third place, below Denmark but with a game in hand. 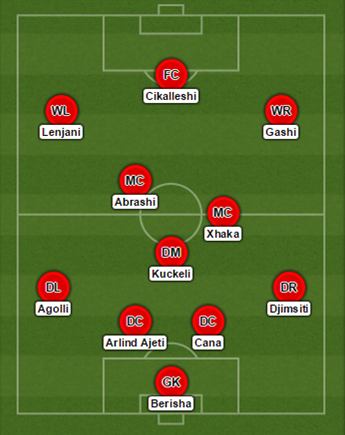 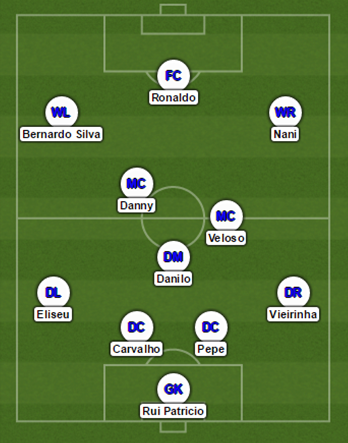 Portugal. A country that has boasted the likes of Eusebio, Luis Figo, Rui Costa and Fernando Couto has found itself struggling to progress to the European Championships in a group with Denmark, Albania, Armenia and Serbia. Just what has happened to this great footballing nation, and why are they still being forced to play Ricardo Carvalho at centre back? And what are Albania doing so high up the table? They’ve never qualified for a World Cup or a European Championships, but prior to this game they were unbeaten throughout qualifying and were still in with a good chance of creating history. Their 1-0 win against Portugal exactly a year ago will have filled them confidence. In Elbasan, they would be hoping to cause another upset.

After using a compact 4-5-1 against Portugal last time out, Gianni de Biasi and Albania were slightly more adventurous in front of their home fans opting to go with a 4-3-3 formation. 25 year-old Sokol Cikalleshi of İstanbul Başakşehir was the spearhead of the attack, with the underrated Shkëlzen Gashi of Basel and Ermir Lenjani currently of Nantes out wide in support of him. Burim Kuckeli, often compared to Andrea Pirlo by the FC Zurich faithful, took up the role of the deep lying playmaker, and was in charge of recycling the ball and dictating the tempo of the Albanian play. Also in midfield were Taulant Xhaka, older brother of Borussia Monchengladbach midfielder Granit, and Amir Abrashi of Freiburg who were asked to tuck in when defending, but also given license to push forward should the opportunities arise. The back four was a mixture of youth and experience, with 21 year-old Arlind Ajeti and 22 year-old Berat Djimsiti playing at centre back and right back, partnered by 32 year-old duo Ansi Agolli at left back and captain Lorik Cana also at centre back. Etrit Berisha of Lazio was again the goalkeeper of choice.

Portugal, like their opponents also set up in a 4-3-3 with Cristiano Ronaldo as their striking focal point. Having scored five goals in his last four matches throughout qualifying, it’s no surprise that coach Fernando Santos decided to go with the Real Madrid man up top. Making up the front three, Ronaldo was accompanied by the consistently inconsistent Nani to his right and AS Monaco’s talented 21 year-old playmaker Bernardo Silva to his left. The midfield included a new face, with new Porto recruit Danilo Pereira coming in to screen the back four with both Joao Moutinho and William Carvalho unavailable due to injury. Alongside him was Miguel Veloso, now of Dynamo Kyiv, who was asked to play the box-to-box role, whilst 32 year-old Zenit midfielder Danny was the choice of the three to get forward and support Ronaldo, Nani and Silva as much as possible. The back five saw Rui Patricio remain in goal, with Benfica’s Eliseu at left back and Wolfsburg’s Vieirinha at right back, neither of whom are true full backs but are adequate temporary solutions. It was then down to Pepe and 37 year-old Ricardo Carvalho to partner up in the heart of defence, which gives a real insight into the lack of options at the back for the Selecção.

After a lively start to the game, the first chance would fall to Portugal in the 11th minute. After an attempted ball over the top for Nani was intercepted by Cana, he then clumsily gave the ball away to the bubbly Bernardo Silva who flicked the ball over the head of Kuckeli to find Ronaldo on the edge of the area. After evading two challenges, the all time Portuguese record goalscorer fired in a low drive that was pushed out for a corner by Berisha, diving low to his right. This would be the first of several attempts at goal from Ronaldo.

The resulting corner was whipped in by Danny and flicked on by the rangy Danilo Pereira, to find Nani, left in acres of space only two yards out. Stabbing his right foot at the ball, the former Manchester United man somehow managed to hit the post from point blank range.

Portugal began to take over the game, dominating possession and exploiting Albania’s needlessly high line as Ronaldo, Nani and Miguel Veloso all broke the offside trap before the 25th minute. It looked to be only a matter of time before Fernando Santos’ men took the lead. In the 29th minute, another chance would fall to Ronaldo after he and Nani had exchanged passes on the left hand side. Drifting inwards, he shook off the half hearted challenges of Xhaka and Kuckeli before firing a shot towards goal from 30 yards. Again, Berisha was equal to the strike, tipping wide for another corner.

It wasn’t too long before Ronaldo was in the limelight again, heading uncharacteristically wide from six yards in the 31st minute after meeting Danilo’s perfect cross. Granted, the Real Madrid man was correctly ruled offside, but this was still a chance you would expect to see hit the back of the net. He retreated back to his position with a shake of the head. Bernardo Silva would be the next player to pepper the Albanian goal, curling a gorgeous effort inches wide after playing a smart one-two with Nani. An anxious look from Berisha as the ball travelled just past the post, followed by a puff of the cheeks, epitomised a difficult first half for Albania, but somehow they survived until half time. And then the game began to turn.

After the break, Albania were much improved in possession. They abandoned their suicidally high line, Cikalleshi fired harmlessly over twice from range as they slowly crept back into the game. Portugal weathered the early second half storm and in the 58th minute they should have gone ahead through Danny, only for him to head a brilliant Cedric Soares cross, on in the 54th minute for Vieirinha, hopelessly wide from six yards. Would they be made to regret all of these missed chances?

Twenty minutes later, they very nearly did. A hopeful ball was launched forward from the Albanian back line, Cedric headed clear, but only to the feet of Cikalleshi who took the clearance in his stride and let fly on the half volley. His shot struck Pepe and span agonisingly towards the top corner. Rui Patricio stood rooted to the spot and after what seemed an eternity, the ball bounced off the upright and away to safety. Incredibly, the game was still goalless.

Game plans went out the window. The final ten minutes were chaos, as if both sides had finally realised what was at stake. Portugal broke quickly from a corner, Eliseu was found by Veloso steaming down the left with a whole half to run into and only the keeper to beat. Berisha, coming down to close the angle was chipped by the full back, but the ball dropped just wide of the post. The Portuguese bench were left with their heads in their hands, as Santos cursed under his breath.

With 91:37 on the clock, frustration would turn to elation as Portugal finally made the breakthrough. A corner taken by second half substitute Ricardo Quaresma, was met by the unmarked Veloso who rose above everybody to emphatically head home. Albania looked heartbroken, their unbeaten run at an end, forced to watch as the white shirts of Portugal wheeled off in celebration towards the corner flag.

Portugal deserved the win and now sit at the top of Group I with two games to play, one against Denmark and one against Serbia. Albania were much improved in the second half, but their failure to place a single shot on target throughout the 90 minutes tells its own story. With a game in hand over Denmark who sit in second, and with Serbia and Armenia still to play, they can still do this. But there’s no margin for error now.

Did you like this feature? Do you want more? How about Rafa Benitez’s first game in charge of Real Madrid? Or perhaps we can interest you in the battle of the Championship’s early high fliers Ipswich and Brighton?