When an interview promises to cover George Best and Alex Higgins, it’s pretty obvious it isn’t going to be run of the mill. And Terry Curran doesn’t disappoint.

The former Sheffield Wednesday and Sheffield United man (no that’s not a mistake, he did play for both Steel City clubs) is in the What Happened To You hot seat for this week’s episode as he discusses a Shoot interview from the early 80s. 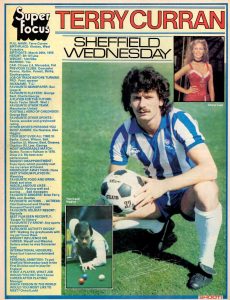 It’s important to point out that Curran hadn’t been in a period of enforced lockdown at the time the picture was taken and his barnet was just the style of the time (also see short shorts). But it didn’t stop some people comparing him to a certain Northern Irishman who had made a name for himself at Manchester United.

While Curran never hit the same heights, spending a lot of time in Sheffield did mean he was used to the snooker fraternity laying siege on the city every spring. So coming into contact with “People’s Champion” Higgins was possibly inevitable.

There’s plenty more to be discussed throughout the episode, including Curran’s love for the Owls – that’s Sheffield Wednesday rather than the birds – and the famous managers he played under.

Terry Curran: Comparisons to George Best and hanging out with Alex Higgins
3.7 (73.33%) 3 votes