As world football was shut down under the Covid-19 outbreak, the handful of leagues that defiantly played on have become a focus of previously unheard-of attention. Leagues in Burundi in Africa and Nicaragua in Central America were well advanced before the outbreak became global, but competitions in Eastern European and Asian leagues began as the virus advanced.

The Belarus Premier League achieved attention after kicking off as scheduled on 19 March, while Taiwan’s Premier League and the Yokary Liga in Turkmenistan have joined Tajikistan’s Vysshaya Liga in starting. 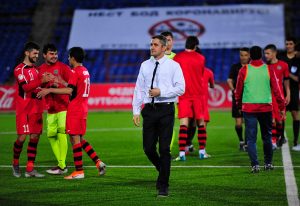 For Nikola Lazarevic (pictured above), the Serbian coach of Tajik side FC Khujand, the experience is partly bewildering but equally reassuring.

“They closed the borders in March as all our neighbours have the virus,” says Lazarevic. “People are walking and working. There is no virus but everyone is talking about when will be the first case. Then the government say they will close everything. Officially everything is OK. But who knows?”

After a spell as assistant coach to the Tajik team in 2015, followed by five months coaching the biggest side, FC Istiklol, the following year, Lazarevic was keen to return.

“I came in December and we started in January and I don’t want to go home,” says the Serb, whose side kicked off the season with a visit to Kyrgyzstan for an AFC Cup qualifier with Neftchi at Kochkor-Ata near the border with Uzbekistan.

“The president didn’t let the fans go abroad as we were in the epicentre of the coronavirus outbreak, but we were lucky to go there early as now there is no football in Kyrgyzstan.”

After losing 1-0 on 19 February, Khujand needed extra time to win the return 3-0 on 26 February. The game was played in the capital Dushanbe in front of more than 5,000 people but when Khujand took on Istiklol back in the Pamir Stadium in Dushanbe in the first AFC Cup group game on 11 March, the government position moved.

“Now, they only use the big stadiums and there are no fans,” Lazarevic explains. 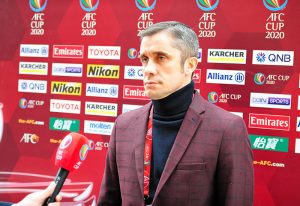 Football may have changed but other aspects of life in Tajikistan, a mountainous country that shares an eastern border with China, have continued unaffected, including public festivals. Navruz, to mark the start of spring, is one of the country’s biggest festivals. During Tajikistan’s time as part of the Soviet Union, the festival was banned but Navruz has enjoyed a resurgence since independence in 1991 and this year was staged at FC Khujand’s stadium on 20 March.

“They started the preparations three months earlier and didn’t want to cancel it,” recalls Lazarevic. “There was like 20,000 or 30,000 people there including the president. It was crazy. I couldn’t believe it and I stayed at home because, well who knows?”

When Khujand took on Istiklol again for the season-opening Super Cup on 5 April at the Central Republican Stadium, only a large banner reading ‘stop coronavirus’ in Tajik and Russian occupied the stands.

Khujand took a surprise lead in the second minute through Uzbek winger Sanjar Rikhsiboev, but fell to a 2-1 defeat. The league began with Lazarevic’s side winning their first game 3-1 away to CSKA Pamir before losing 3-2 at home to FC Khatlon. For the Serb, the challenge this season is to try and overhaul Istiklol.

The only Tajik club to play in the top flight of the old Soviet league is CSK Pamir, but Istiklol quickly took over as the dominant side after forming in 2007 and have won every league title since 2010. Founded by Rustam Emomali, the current Mayor of Dushanbe and president of the Tajik FA, Istiklol also won the 2012 AFC President’s Cup and reached the final of the 2015 AFC Cup. 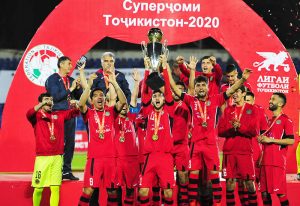 Emomali’s father Rahmon has also been the country’s president since 1994 and insists that as Tajikistan officially remains unaffected by the virus, football can continue. This brings increasing attention to the Vysshaya Liga and Lazarevic’s family back in Serbia can even watch his new team.

Subscription channel SportKlub broadcasts to six countries in the Balkans and has snapped up rights to football in countries where the game continues, including Belarus and Tajikistan.

“It’s unbelievable, who would have thought this can happen?” says Lazarevic, who sees a great opportunity for Tajik football but tempers expectations.

“It’s a chance for the place to show itself and the players are thinking about that,” concludes Lazarevic. “Now is the time to promote Tajikistan as a country, but don’t expect to see top-quality football. For this part of Asia, the quality of football is normal.”

And with global restrictions unlikely to be relaxed to host matches any time soon, the stage is set for the Tajikistan Higher League – and Lazarevic – to shine.