A preacher and a busker battle for attention outside Stratford Station. Further on, a Turkish café-boat serves pricey coffee to lean joggers as the spring sun glistens off a canal. There’s a warehouse-turned-bar with an owl graffitied on it. It’s all very east London.

Over the grumble of the café-boat’s engine and the twangs of its radio – playing a repetitive, Mediterranean-equivalent Godfather theme tune – speaks Betty Mayeya, the manager of Stonewall Women and Non-Binary FC. Nestled among the commonalities of E15, her team makes for a unique find: there are male clubs everywhere, many for gay men, while most women’s teams include openly LGBT+ players. Few football clubs exist explicitly for LGBT+ women and fewer still for non-binary people.

Betty founded this arm of Stonewall FC, an internationally known outfit, a year ago in April. The aim was to build three five-a-side teams and play competitively across the week and since 11 players attended the first session, Stonewall Women and Non-Binary has grown to a group of more than 60. Recognition has started to follow: they won the Football v Homophobia Women’s Game Award in February this year. 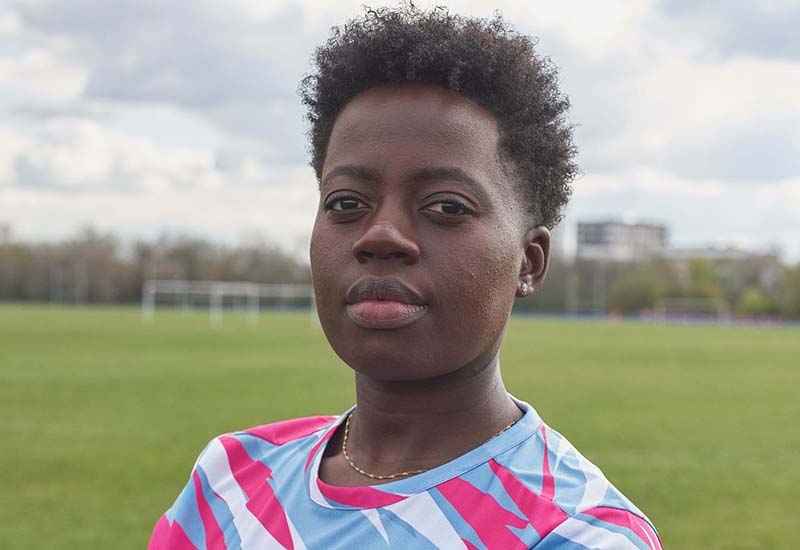 You won’t have seen Betty collecting the trophy, however. Stonewall’s story is well known; hers is not: she’s done no solo media before. Last April she’d never have entertained doing an interview. Today it’s still out of her comfort zone, but a year as a Stonewall manager has grown her confidence.

When she sits down with The Set Pieces, Betty has a range of traumas to unpick, but she does so with a melodic voice and composed, semi-diplomatic answers. She squints against the sun and doesn’t twitch when the wind picks up, despite a black body warmer leaving her arms bare.

Her smile hides that what she’s saying is tough and makes it seem as if competing with the hubbub around her is the only challenge. The boat rumbles on and Betty begins her story.

She was one-year-old when her mother died of cancer. Her brother was three. Her father, a Zambian lecturer now at the University of Warwick, came under pressure to cede care for his children to the mother’s extended family. He adamantly refused, but moved them to South Africa aged five and seven to nurture the norms and values he grew up with.

Betty fell in love with football in South Africa by watching her brother play or competing with him on FIFA. But playing never crossed her mind, young girls were expected to “help out at home, do your schooling and just stay quiet, basically.” Playing football wasn’t an option. A decade or so later, when she started questioning her sexuality, a similar parallel occurred: she couldn’t conceive of being gay. In both cases, her culture didn’t permit it.

When she returned to England aged 10, Betty had her first chance to play football and, after waiting to be picked last in the playground, found her talent and enjoyment “automatic”.

If her ability made life any easier, it doesn’t show today.

“I was the only black girl in the whole school,” Betty says. “When I was in Africa a lot of them saw me as the English one, the one with the accent who wasn’t born there. So I was segregated in a way. Then when I came back to England I was no longer the English one, I was the African one.

“Some kids would come up to me and touch my skin to see if the colour would come off, and say racist comments about how dirty being black is.”

Betty moved to a more diverse school where her white classmates found other ethnicities to be more of a novelty than a problem. She says it still felt isolating, but that she’d “take that over the outwardly racist comments all day.”

Time went by and Betty turned her passion for football into a more serious pursuit, joining Leamington Ladies and trialling with Birmingham City and Coventry City (now United). She later played with AFC Bournemouth and Port Vale.

Her step into semi-professional football coincided with the years she began questioning her sexuality. As with much of what she says, Betty explains an emotional experience with half a joke.

“For my dad, it was: don’t bring any boys home. And for me that was fine! I was like: ‘Yeah, Dad, sure, no problem’,” Betty recalls. “But I just felt this massive deceit and really uncomfortable for the fact I was sneaking around and lying to him. He had this trust in me that these were just my friends, and they weren’t.

“I ended relationships because I didn’t like what I was doing and who I was becoming. I felt I was constantly lying and deceiving and that was purely because I was fighting the feeling of being gay and trying to navigate the relationship with my dad.”

Betty’s father raised his two children solo, while caring for their mother and studying a PhD.

“I appreciate everything he’s done and I don’t want to disappoint him or hurt him in any way. The fact I was doing that regularly was really quite tough,” she says.

“Culturally being gay is a huge no, a massive no. So I was battling the thoughts I was having about: ‘Am I gay?’ to ‘I can’t be gay, because I’m black and we’re not supposed to be gay’.”

Betty says this came from seeing no black openly LGBT+ people in her family, friends or the public eye. Her intersectionality is comprehensive. She says there lingers homophobia in parts of the African Christian community and racism in LGBT+ circles: “Sometimes it feels I don’t fully belong in each.”

One day Betty received a debut call-up to Leamington’s first-team. She was 16, and her experience in the changing room highlighted her insecurities.

“I was at that age where I was very unsure… They were all in the changing room and all laughing and joking and making little jokes between themselves because they were gay and comfortable being gay. Whereas I was like this little ‘baby gay’ and not really sure about myself. I was looking at them, thinking: ‘Wow, you are all who you are’. I was thinking if I’d ever get to that point.”

Eventually she did. Aged 19, Betty accepted she was gay but kept it from her family. One day her then-girlfriend posted about them on Facebook and an aunt on her mother’s side saw.

Betty received a phone call. ‘Please don’t tell me this is what I think it is,’ her aunt said. ‘You should have told me, we could have prayed about it. We could have helped you.’

Betty says she feared her dad would find out and implored her aunt to let her speak with him first. The aunt said she would, but that she would also call every day to “pray the gay away,” in Betty’s words.

That weekend Betty went to see her father. He was off-hand with her, which she put down to paranoia and ultimately she couldn’t find the words to come out. She remained like that for three anxiety-filled years.

“Because my dad was the one who brought me up I didn’t want to disappoint him… I kept battling, thinking: ‘The worst-case scenario is he’s never going to talk to me again.’ And I didn’t want that,” she remembers.

Then one day, Betty came out to her father and he said he already knew. Betty’s aunt told him three years earlier, the weekend he was off-hand.

“When I told him, he was just grateful for the fact I actually came out to him,” Betty says. “He said: ‘Your happiness is paramount to me.’

“He wasn’t disappointed. He accepted it and has fully accepted my partner [Nicole] and loves her.”

Betty’s relationship with her father regularly arises. Her extended family blamed him for Betty’s sexuality, in their eyes she grew up with two men and now acted like them. She thinks if she hadn’t grown up in that environment, she may never have come out. “I think I probably would have kept fighting it and stayed quiet,” she says.

Today it is abundantly clear how Betty’s journey drives her efforts with Stonewall FC. It is not a passing commitment: she works for an investment bank by day, coaches on three weeknights and across the weekend, and fills any gaps picking squads or supporting teammates. Her involvement is pivotal.

“She [Betty] has done such an amazing job with this team,” says development team captain Zeenat. “She’s worked so hard to get us where we are and has been an amazing shoulder for us… She is the reason a lot of us come back every Saturday to play. She is the reason and whether she knows that or not I don’t know.”

It’s unlikely. Betty laughs a little awkwardly and runs back to the pitch when we ask her later that day at training.

Sessions take place in the shadow of the London Stadium, home to the 2012 Olympic Games. While Betty speaks, its vast supports loom over her shoulder and 10-year anniversary banners ripple in the wind. Then, the summer of Super Saturday and parachuting monarchs, there had never been an openly trans athlete compete in the games. In Tokyo 2021, at least four took part, with more than 160 openly LGBT+ athletes involved. Betty acknowledges this progress.

“This time 10 years ago was completely different,” she says. Her role in that is fuelled by being a black, female coach, a figure she never had, gay or otherwise. She also battles with her own playing career, frustrated it never went further due to the financial restraints shackling women in football. With this on her shoulders Betty has become compassionate, determined and empathetic, not bitter or insular.

She starts to fidget as this interview ends. Her pitch opens in minutes and she has three bulging bags of balls to carry over. A crowd of players gathers in the distance. Betty, erudite and engaging but once unwilling to interview, is still more comfortable on the turf.

She begins training. There are stray balls and replica shirts and slackers walking the warm-up. Lean joggers await their canal-side coffee as the Turkish Godfather continues to play. It’s all very east London, all very normal. But at its core is an extraordinary person, using a unique life to make the world different.