Playing cards in an apartment in the Navigli district of Milan, with your mates and a few beers, is a very nice place to be. It’s an even nicer place to be when you know tomorrow you’ll be heading to the Stadio Giuseppe Meazza – the San Siro – for the first time ever.

We’d wanted to make the trip to experience the San Siro before the chance is taken away by the ruthless development of modern football, so the clash between Antonio Conte’s Inter and Sampdoria would have special significance. We had no idea.

Our pleasant evening was shattered late at night by a tweet from Fabrizio Romano. The man usually confined to transfer news had let the world know that Inter-Sampdoria, as well as two other Serie A matches, had been cancelled due to the developing coronavirus situation in Italy.

If you hadn’t guess already, this is February 2020 – a time when Covid-19 was a recurring news story. A gently growing concern, but something those of us without a scientific background assumed would go away very soon.

It feels daft to say knowing what we do now, but the idea of the game being cancelled hadn’t crossed our minds. It just wasn’t on the cards. The only difference between that trip and one from pre-COVID times was that we had a temperature gun waved in our face when we landed at Malpensa Airport.

This Romano tweet was the first time that coronavirus had had any direct impact on our lives. We had no idea that this was a minor impact compared to what was to come. 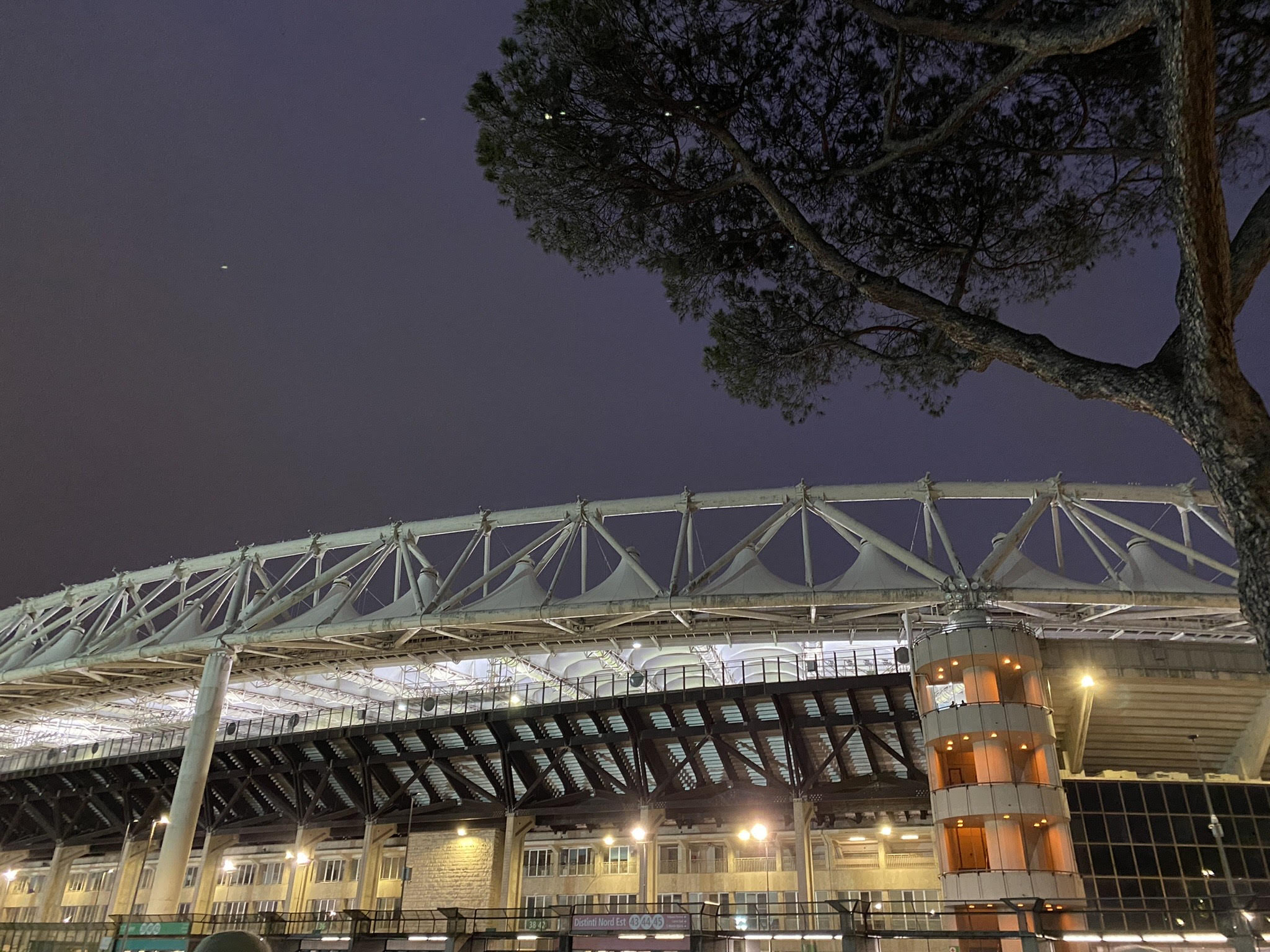 One of our group was in the toilet when I broke the news to the group. And as he so succinctly put it, “I went for a shit, came back, and the entire world changed.” Quite.

The mild panic this news put us into makes us feel extremely daft with the gift of hindsight. Can we get home? Are we going to get the virus? Can it actually do us harm?

In terms of rescuing the holiday, we toyed with the idea of nipping down to Brescia to see them play instead, or maybe a day trip to Verona. In retrospect, that would have been a stupid thing to do given the circumstances.

We settled for a tour of San Siro instead, as any football fan would. We came to see this famous old stadium do what it does best, so we may as well at least set foot in it. Because of the novelty of the situation, we were still in relatively high spirits. The tour was great, the stadium looked remarkable, the sun was out. Then we sat in a stand and all went a bit quiet. The gravity and the surrealness of the situation hit us all at the same time. But as British men do, we shook it off and tried to make the most of what was left of our trip.

There were times in the ensuing two years that we might have thought we’d never get closer to watching a game at San Siro.

Having missed out on our visit in 2020, we were filled with renewed optimism like many others come 2021 when fans began to return to stadiums across Europe.

There are many different types of return, in this sense. For some, it’s a return to their home team. It can also be the venue that holds significance, or the specific fixture.

For an Atalanta fan such as Conor Clancy, editor of Forza Italian Football, returning to San Siro was significant for two very reasons. The first is that it’s a stadium he adores and hadn’t been able to properly visit for almost two years.

“Once the stadium emerged in the distance as I turned a corner, all of the old feelings came back,” he recalls. “The panini stands, the merchandise stalls, the smell of the porchetta. It was all coming back. It all felt normal again, but with more emotion.

“I stood for ages just looking around, as I’d done at the Bentegodi too, just watching people go about their business.

“Being in stadiums with fans is great. It was good last year when 1,000 were tentatively re-introduced and then it was painful when they were taken away after a couple of months.

“But fans at that stadium is different. The way the San Siro traps noise. The way Inter fans, in particular, make noise. It’s all so special and it was hard not to be overwhelmed at times. I was pleased to have captured the two goals I saw in an audio recording for a new kind of podcast I was working on, but mostly because it meant I could listen back to them a hundred times after the game (I still listen to them on occasion).”

The other is that his previous visit was the Champions League match between Atalanta and Valencia that would go on to be widely referred to as a biological bomb. That match was a large part of why Bergamo became the focal point of coronavirus in Europe during the early stages of the pandemic.

Around 44,000 fans were at the 4-1 victory. Bergamo had a six-hour wait for ambulances in March 2020 as well as 16-hour waits once in the emergency room. In April 2020, an investigation by Eco di Bergamo determined that 4,500 people in Bergamo were killed by the coronavirus in March 2020.

“It was hard to escape from the memories of February 19 2020, as I made my way to the San Siro, but it had a lot to do with the whole weekend as well,” Clancy continues. “Before COVID I used to go to two, three or even four games in a weekend and during the worst of the pandemic that became one game every other week and basically just Parma home games. Things had started to pick up, but that weekend at the end of October 2021 drove home how far we’d come.”

For Liverpool and Atletico Madrid fans, luck of the draw meant they recreated a match that proved significant in those two cities’ battles against COVID-19 too.

The preliminary report on the handling of the coronavirus pandemic by the government and Boris Johnson said 37 people died unnecessarily as a direct result of being at Anfield that night in March 2020. A band of 3,000 Atleti fans were able to travel to Liverpool for the game despite schools in Madrid having been shut down to tackle the rapid spread of infection.

Liverpool lost that game in extra time but as the months went by, the public health effects of such an event meant the result paled into insignificance.

The same fixture was played against on 3 November 2021, this time in the group stage. Many fans were returning to see the same two teams face each other in the stadium where loved ones had contracted a virus that led to their deaths.

Needless to say, the fixture, as well as the timing of the report into the government’s handling of the pandemic, meant the football once again took a backseat in the build-up. Ben Kelly, of Sportbible and formerly Redmen TV, explains the contrast between the two fixtures.

“The Atletico game in March 2020, to put it bluntly, was just really odd,” Kelly remembers. “Nobody wanted to pass up the chance to be there because of the magnitude of the game and, at Liverpool, you’re always in a privileged position to have a ticket for a game that size.

“But there was also a huge, daunting sense of something looming. It was like a storm was brewing somewhere in the distance. Things just felt uneasy, but there had been no official word from UEFA, the club or even the government that the game was unsafe to attend, so how were we to know any different?

“It was a huge sliding doors moment for the city of Liverpool at the start of the pandemic. The consequences have since been proven and the city suffered in terms of cases and deaths in the weeks that followed. It started a long trend of the government being too slow to react to how quickly this virus has developed.

“In November 2021, things were obviously very different. I’d had three vaccines by then and even though it wasn’t a game as big as a round of 16 second leg, it was still a big game in the context of the group. But more than that, there was a nice sense of things coming full circle. The vibe of this game was the vibe the game in March 2020 should’ve had, simply two very good football teams competing in a big game of football. Nothing else was clouding it and this time, Liverpool won comfortably. It felt like closure.”

I had resigned myself to either never setting foot in San Siro on a matchday or at best having to wait two or three years until the opportunity presents itself again.

As it would turn out, I managed to get that particular dream ticked off in January 2022 courtesy of an unexpected Christmas present.

I’d already booked for my partner and I to go to Milan in January as an anniversary gift. I’d be lying if I said I hadn’t noticed Inter were at home to Lazio while we were going to be there, but I opted against turning the anniversary trip into a football one. 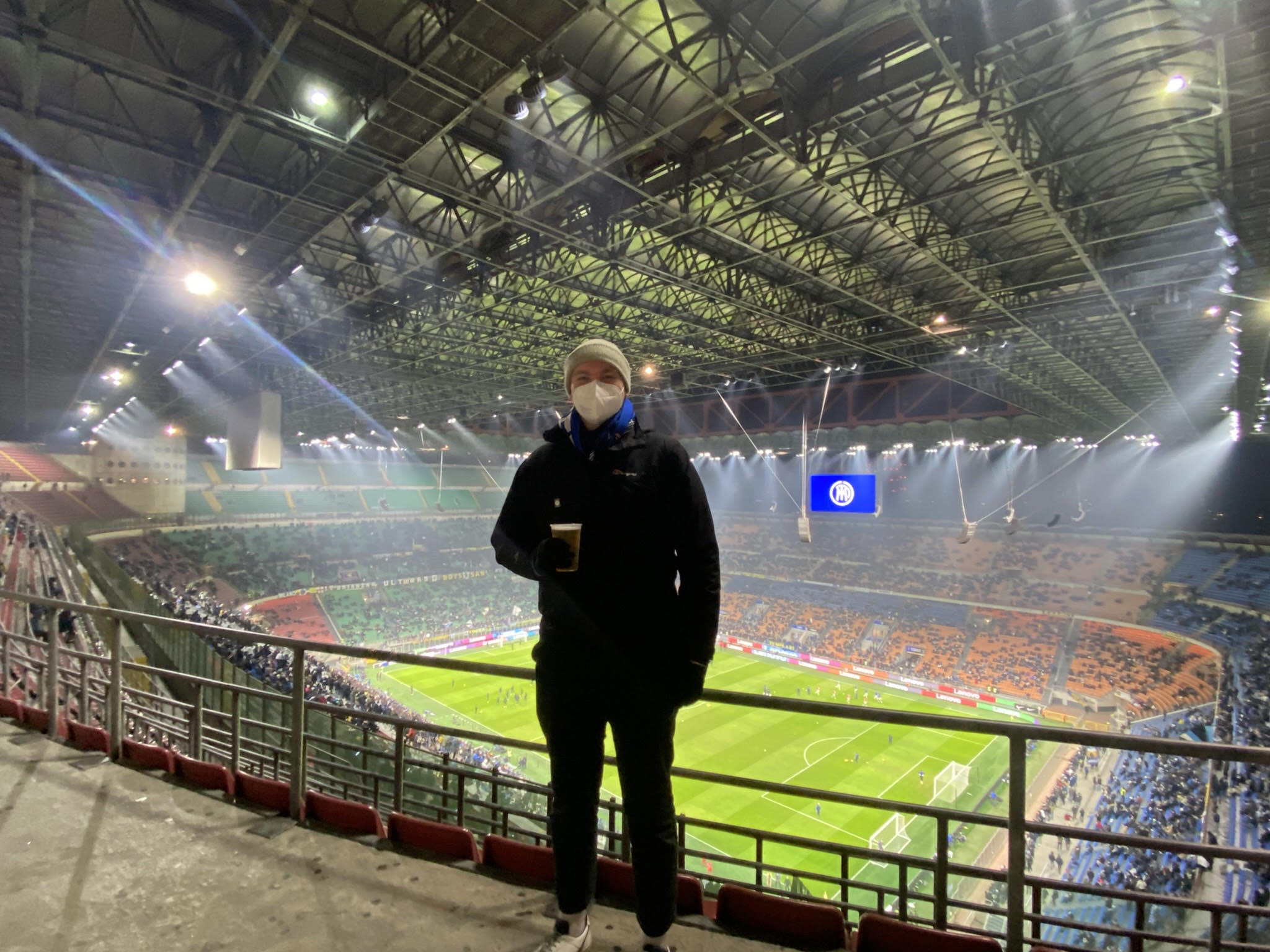 As it turns out though, tickets for the two of us to go to that game were my Christmas present. With the rise of the Omicron variant, we were relatively convinced that we wouldn’t be able to do the holiday. I was also very wary of the high number of games being called off in Italy due to positive cases among squads.

Luck was on our side, though. A fabulous weekend filled with food, drink and then a bit more food, was rounded off with Inter beating Lazio 2-1 on the Sunday night. Coming out of the metro and seeing the stadium lit up with droves of people making their way towards it is one of the great sights in football. I didn’t care that the capacity had been dropped to 50%, I was going in and so were nearly 30,000 others.

Heading up the spiral ramp to get to our seats was a surreal and special moment for me and I hope many others get the chance to experience it before it’s too late.

The wheels are in motion for the ground to be demolished and replaced by a modern, all-purpose, stadium along with some sort of entertainment complex. And I’m just glad I can finally tick it off my bucket list before it’s gone forever.

And after the past two years we’ve all been though, those experiences mean that little bit more.