If everything had gone to plan for Souleymane Coulibaly, he could still be playing up front for Tottenham Hotspur alongside Harry Kane. They struck up a good understanding at youth and reserve-team level, both scoring plenty of goals, before their careers went in different directions. Instead, the Ivorian striker is playing for Etoile Sportive du Sahel in Tunisia.

“If I had the chance, like a lot of people had at Tottenham, I don’t think I’d be here,” says Coulibaly.

“I’d be playing first team in Tottenham because I know my ability. I know what I’ve got in my locker. If I was there when Mauricio Pochettino came, who knows?

“But it didn’t happen, so that’s why I’m here. I was expected to play in the Premier League for Tottenham, to help them achieve whatever they wanted. But, you know, football is like this. Sometimes you go down, sometimes you go up. The best way is to keep going. That’s what I’m doing.”

Coulibaly arrived at Tottenham in July 2011, fresh from scoring nine goals in four games at the FIFA Under-17 World Cup to claim the Golden Boot. His performances made him one of the most exciting and coveted teenagers at the time. After moving to Italy with his family at the age of 12, he had come through the youth system at Siena. Suddenly, everyone wanted his signature.

“To score nine goals in four games was fantastic. It was unbelievable. I was really happy. There were a lot of offers,” recalls Coulibaly.

“I did well because my teammates trusted me. Before we went to Mexico, we played a lot of friendlies together. They knew that I was good in front of goal. The only thing they were going to do was give me the ball to do the job. My confidence was very high.

“I was happy with my performance and for all of the Ivory Coast. It was a proud moment for all of Africa as well because when you play in a World Cup, it’s not only your country you represent, you represent the whole of Africa.”

A tricky dribbler and instinctive finisher, Coulibaly was simply unstoppable that summer. No opponent could handle him. He scored four goals against Denmark, a hat-trick against Brazil, and a goal each against Australia and France. The likes of Raheem Sterling, Memphis Depay and Sebastien Haller, who have gone on to star in Europe’s top leagues, trailed in his wake.

Coulibaly scored all sorts of goals. There was a spectacular overhead kick, a thumping shot from a tight angle, instinctive close-range finishes and thrilling solo efforts demonstrating skill, strength and precision. It felt like there was nothing he couldn’t do. Huge clubs were queueing up for a player being labelled as the new Didier Drogba.

Such a tag could have been a burden for a bright-eyed 16-year-old, no matter how talented or focused he was. It brought added pressure, not all of it justifiable given the difference in stature between the two. Despite being six inches shorter than Drogba – and more nimble than powerful – Coulibaly embraced the comparison.

And having already coped with living away from home in the Siena academy, Coulibaly was comfortable with the idea of heading abroad. He received offers from Real Madrid, Barcelona and Manchester United, but was focused on joining a club that would help him develop and provide a pathway to the first team.

“Tottenham went to Italy and made me the offer. It was a good opportunity for me. The ambition was good there, so I signed,” says Coulibaly. “The programme at Tottenham was really good for young players. They were planning what they were going to do with the training ground and I could develop with a young team.

“It was a fantastic opportunity for me. I started training with the first team when I was 16 years old, with Jermain Defoe, Luka Modric and Gareth Bale. Harry Redknapp was the one who brought me there. It was a fantastic experience.

“The only thing that was difficult for me at Tottenham was the language because I wasn’t speaking English. I was only speaking Italian. But the secretary at Tottenham – his name was Roberto – helped me a lot. He could speak Italian, Spanish and English. In football I was doing good. I scored a lot of goals for the Under-18s and I scored a lot of goals in the reserve team as well.”

Unfortunately, Coulibaly was unable to take the next step. He was involved in a few friendlies, but was never given the chance to show what he could do in competitive action. He left after three years at Tottenham, signing for Bari back in Italy. It remains a source of disappointment, particularly given the direction Spurs went in after appointing Pochettino.

“The only regret I have is not playing for the club because they did everything for me,” Coulibaly laments. “They helped me a lot, even when I was sick. I went on holiday to the Ivory Coast and I was sick. Tottenham brought me back and helped me. I was trying to give back the help they gave me by trying to play for the first team one day.

“But I trained with a lot of good players and learned from them. That was the most important thing for me personally. You take that experience and try to move on. I don’t regret my career. I just regret not giving back what the Tottenham fans were expecting of me.”

Timing can make all the difference in football. The contrast with the fate of Kane is unavoidable. The England striker is 18 months older than Coulibaly and wasn’t considered anywhere near as bright a prospect. At youth level, he was diligent and reliable rather than special.

“Harry Kane was a hard worker. He wasn’t the Harry Kane who people see today, but he was a guy who gave 100% in training,” says Coulibaly.

“He was the one who worked very hard in training and in matches. You know how football is, when one manager gives you the chance you become who you are. That’s what happened to Harry Kane.

“When he started playing with Tim Sherwood, he wasn’t great. But game by game he became the Harry Kane that everyone knows now. I’m not surprised he became like this. He had a great work ethic and was a good professional.”

Few could have anticipated how Kane would blossom once a manager showed faith in him. His transformation into an elite striker was as impressive as it was unexpected. He now has more than 200 career goals and is captain of his country. Coulibaly is understandably disappointed his opportunity never arrived and wonders what if.

“It was very tough. With every footballer, when you start playing and your confidence is high, that’s when people need to give you the chance. When the chance doesn’t come, you have to leave for first-team football. You cannot stay at a big club just to play in the reserves. Everybody has their ambition. My ambition wasn’t to play for the reserve team.”

Coulibaly went out and played, first at Pistoiese and then Peterborough United. His best spell came at Kilmarnock, who he joined on a free transfer in 2016. He scored with a backheel on his debut and registered 11 goals in all competitions. During a brief but thrilling run, he amassed quite the portfolio. There was a 40-yard thunderbolt against Celtic and an overhead kick against Dundee, greeted with his trademark backflip celebration.

He moved to Al Ahly for £800,000 in the January transfer window. However, Coulibaly soon felt uncomfortable with the way the Egyptian club operated, claiming that he was treated like a slave and told to bow down and pray when he scored. He walked out on them after four months to return to the UK, setting in motion a long and expensive dispute that contributed to him missing a year of football.

“I didn’t expect what happened. When you sign for a club you think everything’s going to be fine. I didn’t know it was going to turn bad. It was good in the beginning. I scored six goals in 12 games there, we won the league and the Egypt Cup as well. It was a fantastic experience, but everything became bad.

“The politics of the club was really hard for me because I’ve never experienced that before. I’d been playing in Europe since the age of 12, so this was my first experience in Africa. It was difficult. The club were asking me to do a lot of things and they were holding my passport as well. It was difficult for me and my family, so that’s why I decided to go. They weren’t happy but that’s what happened.”

Coulibaly hoped to recapture his Kilmarnock form with a move to Partick Thistle, but it didn’t work out. The manager who signed him was sacked and his replacement, Gary Caldwell, didn’t seem to trust Coulibaly. He was restricted to just three appearances as the Jags laboured to an eighth-place finish. Caldwell resigned at the start of last season, which ended in relegation. 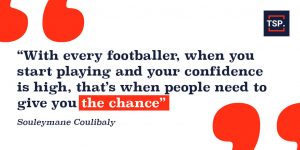 “He knew nothing about football,” claims Coulibaly. “He didn’t play me, so I just played in the reserve team. Sometimes I would play in defence or midfield as well. When a manager doesn’t like you, you can’t do anything about it. I don’t know why he didn’t like me. Only he knows. But he doesn’t know anything about football because if he did Partick wouldn’t be in League One. He destroyed the club.”

In May 2019, Coulibaly joined Etoile Sahel, his 10th club in a fifth different country. After recovering from a knee operation, he was back playing before the coronavirus pandemic brought the season to a halt. Living alone in Tunisia, with his wife and children back in England, it made for a stressful time, but normality is gradually returning on and off the pitch.

“It was a very, very tough moment for me. I was really worried about my family in London. Here there were not too many cases, but there were lots in Europe. Thanks to God, they are fine. They are good and I’m good here as well,” he says.

“Sometimes I would go out for a run. I would work in the gym or at home. I would call my family to check on them. That’s what I was doing for three months because we couldn’t train. We started training in June. I was doing fantastic. I feel great now. I feel like I did in the World Cup in 2011.”

Coulibaly is determined to make up for lost time. He was prolific in friendlies running up to the Tunisian league’s restart and wants to help Etoile Sahel qualify for the African Champions League and challenge for silverware.

Beyond that, who knows what the future holds for a talented striker who is still only 25? He still dreams of playing for the Ivory Coast at senior level and their new manager Patrice Beaumelle has been in touch. He has come a long way in the past nine years.

“When you play for a big club like Tottenham, you learn from a lot of people. I came out from there and started playing first-team football around the world. I’ve been moving around the world for ages,” laughs Coulibaly.

“My priority is to do good in this season. To try my best to score a lot of goals and then see what’s going to happen. You never know. I’m going to try to make history here and win something for the club before going back to Europe.”

If he does, perhaps it’s not too late for Coulibaly to share a pitch with Kane again.

Souleymane Coulibaly: “I could still be playing with Kane at Spurs”
4 (80%) 17 votes