The journey to Galatasaray’s Turk Telekom Arena is a challenge for any foreign journalist. Beginning just south of the city centre, the green metro line trundles under Taksim Square, modern Istanbul’s central hub, through to Haciosman in the north. Along the way, the stop at Sanayi Mahallesi shows connecting signs for Seyrantepe and the Turk Telekom Arena. A grey concrete plaza awaits, with a security cordon separating the metro user from the vast stadium.

The security guards line up and indicate that passage is only possible with a ticket, but the collection point lies beyond the cordon towards the back of the stadium. This contradiction, like much of Turkish life, is greeted with a shrug, before the usual game unfolds; the presentation of press cards from various leagues and stadiums, the prospect of disappointed editors, and then, eventually, the security guards relent and open the gates.

December 11, 2013 was different. The security guards were cheerful, waving people through with each glug of warm çay, as a white blanket of snow had descended on the city, causing the previous night’s match between Galatasaray and Juventus to be suspended. With 30 minutes played in a dull game, light hail had turned to heavy snow, covering the pitch and forcing the referee to stop play.

Then the waiting had began. Holed up in the stadium’s media centre, journalists hung around deep into the night, editors in ears, until a UEFA spokesman finally relayed the news. The match recommenced on Wednesday morning, starting where it had been stopped, in the 32nd minute. But it was not the same match. Where the atmosphere had contained some needle the night before, Wednesday proved almost festive, with kids bunking off school and families chucking snowballs at each other outside the stadium. The sense that this was a one-off, not to be missed, was palpable.

The clearing of the snow overnight had reduced the pitch to a muddy field, more suited to heavy legs from the Sunday leagues, rather than the millionaires of the Champions League.

Juventus were unhappy, too; no Pirlo, no bowling green and no fans – their legion had returned to Turin, unable to predict that an away match might take two days. Their complaints centred on the pitch, and a perception that they’d been shortchanged. One area of the surface was worse than the rest, the mud and snow more deeply entrenched. This area would be occupied by the right-wing of Juventus’ attack in the second half. Yet, though the Juventini complained, this perceived injustice failed to determine the outcome, the deciding moment coming at the other end of the pitch. 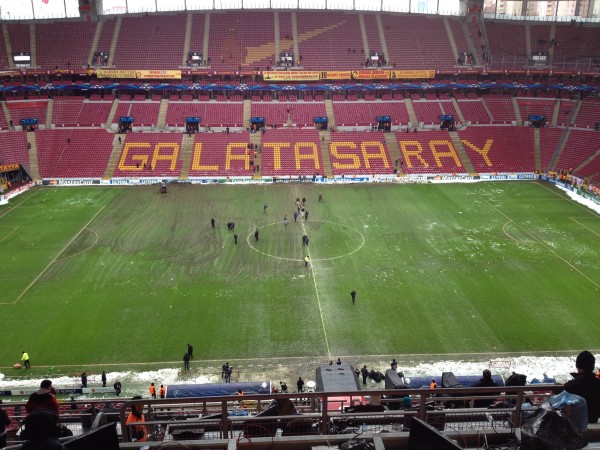 The pitch after the snow. Note the localised damage on one side. (Pic: Eliot Rothwell)

A drop of the ball was enough to begin. The stodgy pitch produced a match deserving of it, as both teams laboured through the mud and snow. Juventus, knowing that a draw would see them into the next round, were restricted. Without Andrea Pirlo, Paul Pogba was asked to shield the defence, curtailing his talent and failing to provide any rhythm.

Galatasaray, too, looked hesitant, almost willing the game to end. Roberto Mancini, needing a win, looked resigned to coming away without one, wrapped in a red and yellow scarf that made him look more Gryffindor than Galatasaray.

Play ground on, yet the tedium was not matched in the stands. The press seating at the Turk Telekom Arena, like a number of grounds in Turkey, is thrust into the midst of the home fans. Journalists are granted a different entrance to the stand, but their desks are placed just a few metres from the supporters, separated only by the steps leading up the stand.

The feeling of being ‘in amongst it’ can deter some, with one Turkish journalist suggesting that it’s an‘unbelievable, crazy’ state of affairs. My first match in Turkey, between Besiktas and Galatasaray, had resulted in an abandonment. Felipe Melo was sent off, inciting the Besiktas fans by raising his Galatasaray shirt, before a pitch invasion meant a call for the riot police and a violent battle around the centre-circle. The press box also suffered, with fans from the upper tier pelting us with bottles, food, and trying to uproot their seats.

Sometimes it can be like looking at the twitter mentions column after criticising a Liverpool player, fans can bang desks, or shout at a particular journalist wearing a club scarf, but on this occasion it was joyous. Fan numbers were diminished by work and everyday life commitments, the game being played in the early afternoon, yet banners were still unfurled, flares were still set off, and the bloke selling çay was still chirpy, still promising a 5-0 win, and still wishing Fenerbahce the worst.

The experience was different, out of step with time, both Turkey’s and UEFA’s, and out of step with Istanbul that day. Most of life went on as normal, despite the snow. Businesses and schools remained open, and public transport continued, highlighting the resilience of modern urban planning. The odd placing of a Champions League match, at a Wednesday lunch-time, was the only trace that the snow had caused something different, something special. Football provided the only means to categorise this as a ‘snow day’, other than the white stuff itself. The atmosphere reflected that.

Fittingly, such a special game was to end with a special moment. As full time drew near, the Galatasaray fans had resigned themselves to group stage exit. Even the çay man looked miserable. But the growing melancholy was broken in the 84th minute. Didier Drogba knocked a long-ball down and Wesley Sneijder stepped onto it, placing a shot past Gianluigi Buffon and into the bottom left corner. Juventus were aghast, their plan for a point shattered and their hopes of progression ended. Galatasaray were buoyant, the customary rendition of Hermes House Band’s I Will Survive ringing out.

Sneijder’s final act cemented the unique feeling of the game. As the ball hit the net, overtaken by joy, he ran along the touchline, arms aloft, before jumping into the pile of snow at the side of the pitch. It was an instinctive act of happiness, and a nod to the snow, the crucial actor in the events of the two days.

The snow continued to swirl around that night. Central Istanbul was awash with Galatasaray fans, lining Nevizade Sokak, a well-stocked boozing area, singing Sneijder’s name and reflecting on their unique footballing experience. On the way home, I bumped into a lone Galatasaray fan at a kebab shop. As we stood, eating kebabs in the snow, I asked him if he had been at the game. “Yes,” he said. “It was the most beautiful football match I have seen.”

Do you have a snow-related story? Have you ever been trapped in a football stadium, battling for survival against the whim of the elements? If you absolutely had to eat a footballer, who would you eat and why? Email us now: [email protected]