As a scout, whenever Charlie Woods would go to watch a football match, he’d make sure he left slightly early to beat the traffic. On one particular evening alongside his friend Bobby Robson, however, he stayed well beyond the full-time whistle.

It was 1997, just after Robson had been moved upstairs as Barcelona manager and replaced by Louis van Gaal; the experienced manager’s new role involved scouting players across the world. Woods was working under George Burley as a coach at Ipswich Town, where he and Robson had developed a close bond more than two decades earlier.

When Robson asked Woods to attend a Liverpool match at Anfield to watch Steve McManaman, he, unknowing of the true nature of the mission, was happy to oblige after receiving permission from Burley.

“We went to Liverpool, but he never said who he was watching,” Woods, now in his late seventies, tells The Set Pieces.

“When I was at a match, I’d leave early to avoid the rush, but Bobby wouldn’t do that. We’d see the bloody game out, head to the boardroom, have a cup of tea and so on. Liverpool is a long way from Ipswich and by the time we left that night, it was quite late.

“We’re driving down the M6 and his phone rings; it was van Gaal. Barcelona had been playing a European game and they’d lost. I listened to the conversation and Robson said, ‘I’m not recommending [McManaman] on that sort of money’.

“The phone went dead, it lost signal, but he stuck with it. After one of the interruptions he says to me, ‘What do you think of McManaman?’. I said, ‘Well, he didn’t play well tonight, but I still think he’s a good player’.

“Bobby says, ‘Would you pay £12million for him?’. I said, ‘Oh I don’t think so, but I would buy him’. The phone rings again and van Gaal goes, ‘You’re saying no to him, I need a player Bobby, who would you recommend?’ Bobby replies, ‘My recommendation to you is to sign the boy Rivaldo’. A day or two later, they got him from Deportivo La Coruña. What a player he was.”

McManaman went on to join Barcelona’s arch-rivals Real Madrid on a free transfer in 1999, by which time Robson had enjoyed a second stint in charge at PSV Eindhoven. Bobby would link up with Woods again later that year, prizing him away from Tottenham Hotspur, where he was chief scout and offering him the same role at Newcastle United. They worked together for five years at St James’s Park.

Long car journeys were a common theme across both their careers, especially at Ipswich, with Woods often driving and Robson in the passenger seat getting his head down. He laughs as he describes the pattern each trip would take as they got closer to home

“Every time we went to watch a match, he’d fall asleep on the way home. Wherever we were – Birmingham, Leeds, anywhere – that’s how he would catch his sleep up. He would drive occasionally, but I did the bulk of it.

“There’s a little place outside of Ipswich called Claydon, it’s on the A45. I’m not joking, every journey when he got there he would wake up and say, ‘Where are we?’. I’d say, ‘Oh, we’re just at Claydon, boss. We’ve only got a few miles to go’. Every time, ‘Eh, you’ve done well son’, I’d always go, ‘Thanks for your company, Bob’.”

It is testament to the friendship between the pair that they kept in touch while Robson was travelling Europe with PSV, Sporting Lisbon, FC Porto and Barcelona after eight years as England manager.

Few knew the great man better and the fondness in Woods’ voice as he recounts his memories demonstrates just how close they were. They first met in 1960, when Woods was playing for Newcastle against Robson’s West Bromwich Albion, who won the game 6-0.

Woods was a veteran at Ipswich when Robson took over as manager in 1969, but came back as youth-team coach a few years later, remaining there until departing for Spurs. He oversaw the development of youngsters, such as Burley and Alan Brazil, who went on to play a key role in Robson’s FA Cup and UEFA Cup successes at Portman Road.

“He [Robson] ran the club from top to bottom,” recalls Woods. “Players in and players out were his responsibility. He loved producing good young players and he would offset that by buying the odd one, like Paul Cooper as a goalkeeper and Paul Mariner.

“But he was captain of a good ship alongside Bobby Ferguson, Cyril Lee and myself. He had a great staff with good people and he won out because he allowed us our opinions, even though he would have the final decision.” 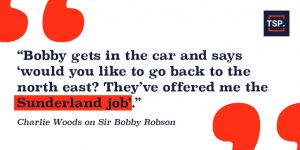 One little known anecdote from his Ipswich days is the early formation of Robson’s relationship with Paul Gascoigne, who would go on to superstardom at Italia ’90.

“We had schoolboys come down for trials after they’d been seen by the scouts,” Woods continues. “John Carruthers, our northern scout who lived in Carlisle, brought Gascoigne down and we watched him play. He was a tubby little fella when he first came down to Ipswich, but what a good player he was.

“We had him in the office and Bobby said, ‘Look, we’d like to sign you son. But what I want you to do is go back to school and come down in the next holidays’. We never saw him again because Newcastle heard he was down at Ipswich and they got into him. But Ipswich were the first club he came to.”

By 1982, Robson had departed to take the national-team job. His reputation had grown exponentially in 13 years; prior to his arrival, after losing his first managerial post at Fulham, he feared he would never get another job. He left having received a number of club offers. Everton was close at one stage and there was even a meeting that now seems unthinkable for the County Durham-born, Newcastle-loving Robson to have taken, according to Woods.

“I was due at a youth-team match away one Saturday morning, but on the Friday afternoon he said, ‘Look, I’m going to send one of the other coaches with your team. Come and watch the first team, then afterwards I want you to bring Pat [Woods’ wife] with you and we’re going up to Newcastle. Drop me off in Durham, take my car and go and see Pat’s mam and dad, and I’ll ring you on Sunday, tell you where to pick me up, and we’ll head back down to Ipswich’.

“So we get there and we’re sat in the car. He comes out and shakes hands with Tom Cowie, the Sunderland chairman.

“He gets in the car. I’m driving, Pat’s in the front, he’s in the back. We get onto the A1 and suddenly he turns to Pat and says, ‘Would you like to go back to the North East, Pat?’.

“He waited a couple of days and decided he didn’t want the job. The first club he ever thought about was Newcastle.”

His eventual exit could have left Woods in limbo, but Robson ensured his future by imploring Ipswich to offer him a seven-year contract. Bobby Ferguson stepped into his position as manager and it wasn’t the end of the working relationship between the two men. For the World Cup at Italia ’90, Woods was stationed in the north of Italy watching games despite still working for Ipswich.

Four years earlier, though, after England were knocked out by Argentina and Diego Maradona in Mexico, Robson was photographed looking pensive by a national newspaper, which Woods says led to a rather amusing misunderstanding.

“There was a picture in one of the papers and Bobby had his head in his hands on the veranda at his hotel,” says Woods. “They made it look like Bobby was in despair, but he called me and said, ‘Charlie, do you know I was listening to music?’. It is incredible what people made up.

“In 1990, the Ipswich manager was John Duncan. He got a call saying Bobby wanted to take me to Italia ’90 and gave me his blessing. I’d already done some stuff for England, I remember flying from Norwich to Aberdeen to watch Egypt play Scotland and I had to file a report, this was quite a while before the World Cup. Bobby Ferguson and I would watch all of their games at Wembley.

“The team were based in Sardinia and I was in a place called Portofino. I did all my match assessments on the games in Turin, Milan and Genoa, all the games in that northern section. He was on the phone every other day, ‘How did that go, how did this go’?”

After leaving Newcastle in acrimonious circumstances in 2004, Robson’s health quickly deteriorated. He battled cancer five times in his life, four times successfully, but in July 2009, passed away at the age of 76 in County Durham. Woods and his wife Pat stayed very close to Robson and his wife Elsie long after their professional relationship ended and he still sees the family today, having returned to the north east after a spell living in Suffolk. He remembers the final time he saw Robson and says that it summed him up as a man – someone who always cared for others more than himself.

“He always had time for everyone, if we were walking down the street in Newcastle and people stopped him, he didn’t ignore them, he would talk to them. Everyone still talks about him now.

“I was living back in Ipswich when he wasn’t very well. I was up seeing Bob and Elsie, I’d stayed with them a few days. I said, ‘Look, I’m going home in the morning. If I wake up, I’ll get myself on my way and I’ll ring you when I get back to Ipswich’.

“I’d parked my car further along the driveway where they live so they couldn’t hear me if I went early. I got ready, it was about quarter to six in the morning, the electric gates opened and I went through them. I was just going through Chester-le-Street, near Newcastle,and my mobile rang. I thought, ‘Bloody hell, who is this?’. It was Bobby and he said, ‘I heard you go son, now drive safely’.

“That is the last time I saw him alive and I’m telling you, he was thinking about other people rather than himself, ‘Drive safely, son’. He used to call me ‘son’ all the time, but that was quite incredible. As a man, he was a bit special.”

It’s a sentiment most people would vouch for.