Can something as old-fashioned as Subbuteo compete with modern football-related pastimes like Football Manager, Pro Evo or the inhalation of nitrous oxide? We decided to put it to the test in the office with our own tournament. We also gave it a proper review and you can read it here.

But you can’t have a tournament without a beer sponsor. It just won’t work. We got in touch with the lovely people at Camden Brewery and they sent us 24 cans of Pale Ale and 24 cans of Hells Lager. It didn’t make anyone play any better, but it was more than adequate compensation for being rubbish. 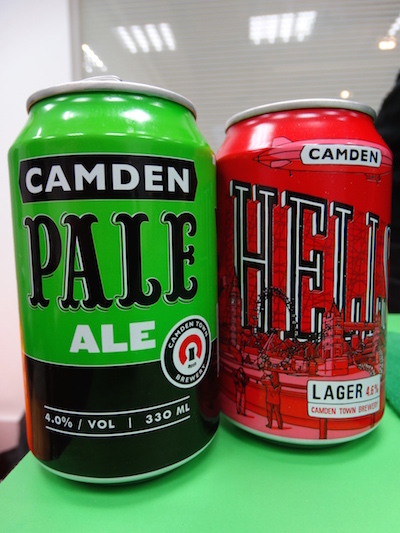 The good people at Ace Sports in Kentish Town made us a trophy to our very clear instructions that it had to look uncomfortably phallic. And then we bought enough sausage rolls to feed an army. Were we ready? Hell, yeah. 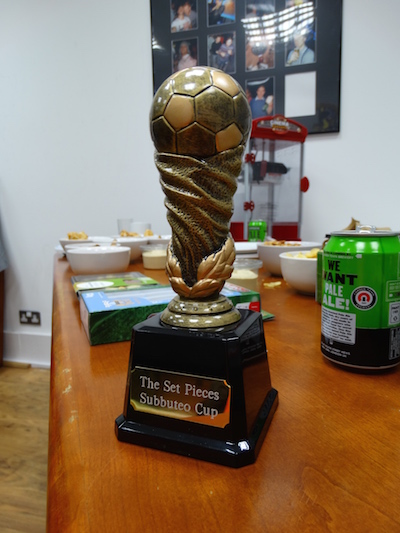 We invited four media titans to do battle with our readers. Philippe Auclair, Rafa Honigstein, James Horncastle and Adrian Clarke stood for the entertainment industry. Liam Ager, Laura Jones, George Osborn (not that one) stood for our readers, along with Rich Aspden, senior developer with our friends Totally Communications and an invaluable source of assistance throughout the process.

Through extensive research (wasted afternoons on Twitter), we discovered that while many people had played Subbuteo as children, no-one had ever actually played by the same rules. We were dealing with a legislative landscape as wild and unkempt as football prior to codification in 1863. In a bid to keep things simple and prevent fist fights, we adapted and simplified the rules. Players were allowed to use any part of their finger to flick, instead of adhering to the strict official rules that insist on fingernail exclusivity. We also broke down the defensive flick rules, granting one for every attacking flick, allowed three positional flicks for every break in play and a full manual reset for every kick-off and goal-kick. It would not have pleased the purists, but at least no-one fell out. 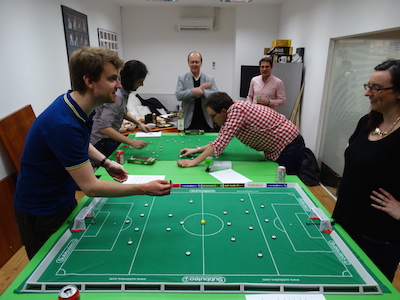 And so it begins: Eight gladiators, their teams drawn by lottery, cast against each other in deadly knock-out combat. Five minutes each way with a shoot-out (five kicks from five fixed points along the 30 yard line) to decide drawn matches. Half an hour’s training on the spare pitch, Hackney Marshes to our Wembley Stadium, was enough to familiarise everyone with the rules. But you just can’t replicate the tension and exhilaration of the real thing. Who would prevail? 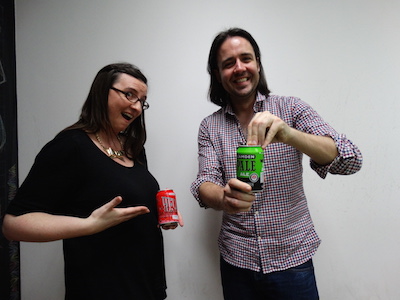 James Horncastle prepares to open a can of whoopbottom on Laura Jones.

A stirring burst of ‘Flower of Scotland’ from Jones suggests that motivation won’t be a problem, but she’s immediately on the back foot as Horncastle surges forward, peppering her goal with shots. Jones is reduced to desperately twatting the ball up the baize and does well to hold out until half-time. “I think I need Archie Gemmill,” says Jones at half-time. But there’s no Gemmill in this box. Horncastle intensifies his efforts after the break and it all gets a bit messy. Three second half goals crush the rebellious Scots and the tournament has a new favourite. 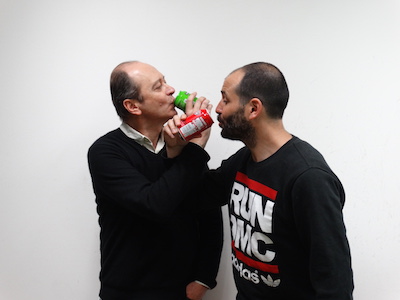 While Jones and Horncastle do battle, Honigstein stands alone on the training pitch, practicing penalties. Perhaps he should have practised defending. Auclair cuts through him to take an early lead and enjoys the best of a tense first half. But Honigstein is tenacious. Undaunted by the precision passing of Auclair, he counter-attacks and, with just five seconds on the clock, scores and sprints across the office in jubilation. The game goes to a shoot-out. In a bid to unsettle Auclair, Honigstein stands his goalkeeper at the near post and walks away from the table. Auclair misses. Is this how it ends? Is this the moment when Honigstein’s practice pays off? No, of course it isn’t. He’s using the English team. Auclair goes through. 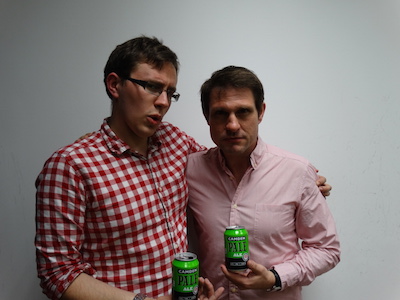 An uncompromising Adrian Clarke has George Osborn (not that one) in his sights.

Osborn has impressed on the warm up pitch, but he’s dazzled by the swift movement of Clarke who attacks the game from the first whistle. Perhaps unaware that the clock stops when the ball goes out of play, the Arsenal TV star darts around the table like a young Ainsley Harriott in the closing moments of Ready, Steady, Cook. “Shall I backheel it?” he asks the crowd, before turning his back on the game, reaching around behind him and blasting the ball into the top corner. He didn’t even wait for an answer. Osborn didn’t have one anyway. A missed second half penalty only compounds his shame. “What went wrong? I missed it. I hit it straight at the goalkeeper. It was pretty bad.” 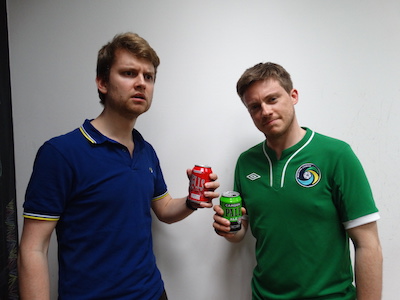 The last hope of the competition winners, Ager starts well, moving the ball with intent. But Aspden has played this game before, he deploys his troops shrewdly and even Ager’s tiny Mario Balotelli is unable to make a breakthrough. Deep into the second half, Ager pushes too many men forward and leaves himself open at the back. Aspden pounces and the night is over for the competition winners. And it’s not even 8pm. 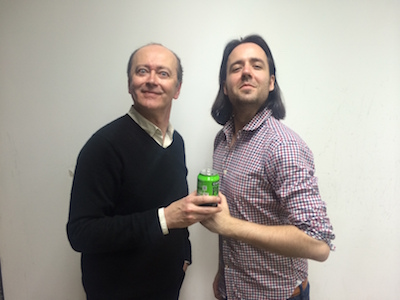 The nobility of battle, encapsulated by Philippe Auclair and James Horncastle.

There are many ways to stamp your authority upon a game, but inexplicably poking the ball past your own goalkeeper inside 30 seconds is not one of them. Auclair stands agape for a moment, but composes himself quickly, ignores Horncastle’s laughter and strikes back on the stroke of half-time to level the score. The ebullience of the quarter-finals has died down now. This is serious and both players go about their business in focused silence, flicking their tiny plastic men into order as play sweeps from end to another. But Horncastle has developed some kind of ‘superflick’ and it’s causing problems. Twice Auclair saves brilliantly, but it’s only a matter of time before he breaks through. Horncastle moves into the final. 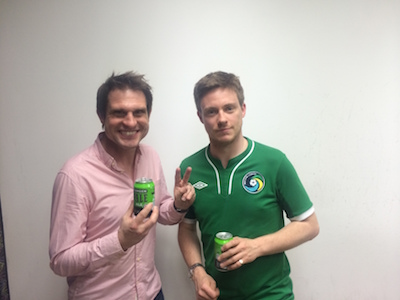 Adrian Clarke predicts how many he’ll score against Rich Aspden.

Clarke picks up where he left off, with a combination of mercurial flair and tireless energy. It shouldn’t be possible to get a sweat on while playing Subbuteo, but he manages it long before half-time. Aspden is a cooler customer, allowing his opponent to wear himself out before picking him off with brutal counter attacks. He takes the lead before half-time and Clarke is crestfallen. But a defensive error from Aspden, a missed clearance just outside his own penalty area allows Clarke back in the game. 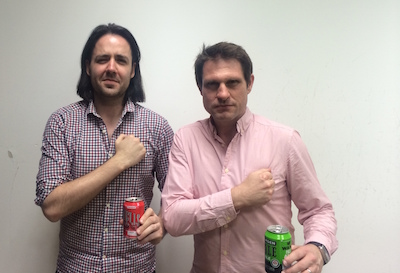 Adrian Clarke and James Horncastle prepare for the final as Susan Boyle sings Abide With Me.

Like a ten year old after too many fizzy drinks, Clarke is bouncing off the walls before the final, twitching throughout Susan Boyle’s moving interpretation of Abide With Me and becoming visibly agitated with his commercial duties. But like a young Paul Gascoigne, he channels that energy into something positive, a brutal close range opening goal that owes more to the liberal use of the laws than it does raw talent.

But Horncastle isn’t unduly concerned. He allows his players to feel their way back into the game, they switch the ball from one side of the pitch to the other like a tiny Guardiola team. Just before half-time, they level the score. It’s a long range effort, the ball just on the scoring line, the shot taking Clarke unawares.

The second half brings more outstanding passing play, but little in the way of clear cut chances. A shoot-out is no way for a competition of this stature to be decided, but there’s little option. We’re way over schedule and we haven’t loaded the dishwasher yet. Clarke starts in the worst possible fashion, scuffing his flick and sending the ball a while three inches across the pitch. But when Horncastle misses too, he’s back in the game. The tide quickly turns. Clarke takes the lead and he holds on to it, sealing victory and falling to his knees in celebration. Beaming with pride, he steps up to collect a trophy that looks a bit like an erect penis. He is the winner of The Set Pieces Subbuteo Cup in association with Camden Brewery. 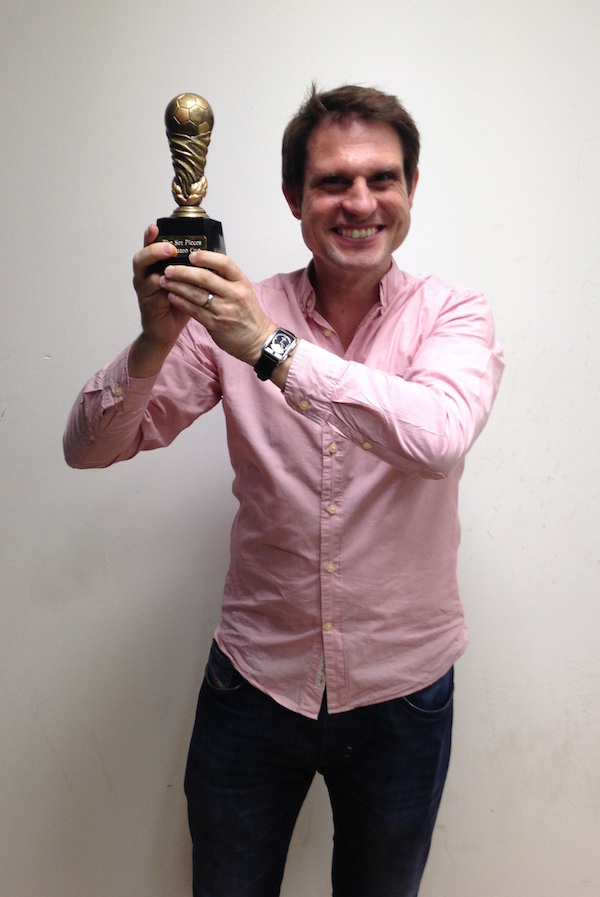 There can be only one. It was Adrian Clarke.

You can buy Subbuteo from Paul Lamond Games and it is also available in major online retailers.

You can find out more about Camden Brewery here. We particularly like their Pale Ale, but their Hells Lager is very, very good too.