Morning coffee in hand, I sit at my desk and turn on the laptop. First, a cursory glance for new emails, and then – almost mechanically – I visit the usual four or five bookmarked websites that sell classic football shirts, hoping to see if a Kappa-era Juventus jersey has appeared for purchase.

Recently I’ve had an awakening, a recognition this process occurs on a daily basis, without fail. A fully-fledged ritual. How had this happened? Had I become hopelessly addicted to shopping for classic shirts? When is enough, enough? Did I really need the Juve 1990-91 away shirt summer edition? It turns out, I did. Another shirt scratched off the never-ending checklist.

I’m not alone in this vintage-obsessed bubble, though. The classic football shirt market is booming, with more dedicated websites cropping up each year and auctioneer sites such as eBay and Depop flooded with amateur sellers. Facebook is similarly laden with groups dedicated to shirts, ranging from standard replicas to the more specialised match-worn and player-issue sub-genre to signed memorabilia. 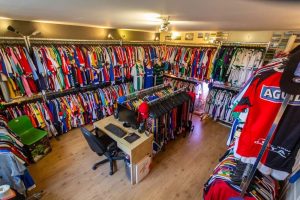 Whether it’s collecting your own club’s classics, spying bargains to buy as long-term investments, or just simply for the love of a beautiful football shirt, it seems people just can’t get enough of old kits.

“I think we’re all a bit addicted to collecting shirts to be honest,” says Doug Bierton, co-founder of Classic Football Shirts (CFS), one of the biggest names in the vintage shirt market.

“I refresh not just our website once or twice a day, but also other websites, looking for shirts. I’m interested in looking at our new deliveries and talking to our staff who are processing them and reminiscing about when we last had that specific shirt in stock or if we ever had it. I can’t really picture a day when I don’t look at a football shirt in some capacity.”

The continued success of CFS is a by-product of the insatiable demand for football shirts – old and new – from collectors across the globe. The company recently moved into a new 75, 000 square foot office space and warehouse facility just outside Manchester, complete with a purpose-built exhibition room to display up to 10,000 shirts.

Considering his obsession – and business – it’s surprising to hear Bierton wasn’t much of a collector before CFS began. But the hallmarks were all there.

“I never really started building a collection,” he reveals. “But I just started buying shirts I wanted to wear – to turn up to five a-side or wear to the pub – and people would ask where I got them from. I wanted to be that guy who wore the short shorts or pretended to be Italian, or that guy who wore an old Adidas tracksuit, rather than building a definitive Man United or any other shirt collection.”

Collecting football shirts has exploded in popularity in the past decade, but what’s in demand has changed as time passes. And Bierton’s noticed the shift towards the mid-1990s.

“In general, the 90s – or the mid-90s – is on trend at the moment,” he says. “It used to be all about shirts from the 1980s, that’s where the big money and the quick sales were. The 80s shirts are still there and very rare, but the real demand has gone towards the mid ‘90s, such as Borussia Dortmund with Nike, Juve and Sony, even Liverpool in the Reebok/Carlsberg era.

“People are buying baggier lately. XL shirts are a good seller for us now, as opposed to five or six years ago when we used to sell out in a small or a medium much faster than an XL/XXL. So the style has gone more towards that. You can see the 90s reflected in the new shirts that are being released, which all hark back to that age of graphic design: bold, crazy patterns type of shirts.”

The game changer for Bierton was Nigeria’s home shirt for the 2018 World Cup, which incorporated a retro design that manufacturers Nike described as a “subtle homage” to the Super Eagles’ USA’94 shirt. Eager fans queued around the block outside Nike stores in London to nab one. According to the Nigerian Football Federation, a record three million pre-orders were made in the run-up to the release of the shirt.

“The success of the Nigeria shirt at the last World Cup indicated how mainstream football shirts have become,” says Bierton. “It’s not really about being a football fan or even someone who likes football shirts. It crossed over. And on the back of that concept, clubs now are trying to replicate that idea and be the next Nigeria.”

Ahead of the 2019/20 season, Nike released third shirts for its sides that incorporated retro designs resonating with the past. Roma, Paris-Saint Germain, Inter, Chelsea and Barcelona all launched kits heavily influenced by the 90s, complete with old-school Nike insignia. They all became instant classics.

A recent unwelcome development has been the rapid proliferation of reproductions flooding the market. Once upon a time the makers of these reproductions, usually based in China, focused on the current season’s batch of shirts. However over the last several years they’ve diversified, and are now also trying to piggyback on the success of the classic shirt scene.

With reproduction shirts generally priced within the £30-£50 range and coming in an array of sizes that CFS can’t possibly offer for some of the most iconic shirts of the past 30 years. Is Bierton worried about their increasing encroachment?

“I think that people ultimately want the originals,” he answers. “I never felt it does us much harm, simply because the supply, quantity and availability of the originals are there.

“They serve a purpose. I’m not against fake shirts, but I am against people trying to sell them and pass them off as originals, and charging original value prices. I’m dead set against that and people who do that should be pulled up on it.

“They do clutter the market and when people try to sell originals and the fakes are quite similar, it makes our job a lot harder to ensure we are only selling original shirts.

“We have to thoroughly check all of the internal labels. And it’s fine for us because we have over 14 years’ experience in selling shirts, but for someone with little experience, they can struggle for the first six months or so to get their head around how good the fakes are.”

There is an exception to the rule. In 2019, the Italian manufacturer Nicola Raccuglia (better known as NR), who produced some of the most iconic shirts in the history of the game for the likes of Napoli, Roma, Sampdoria, Milan and Fiorentina in the 80s, approached Belgian collector and seller, Damien Eck about collaborating on a high-quality reproduction of the Napoli home shirt from the 1987-88 season.

The company would recreate the shirt, complete with Scudetto shield, Coppa Italia coccarda and number 10 on the back in honour of its most beloved son, Diego Maradona. Furthermore, NR told Eck they would produce the shirts with the same acrylic material they’d done with the 1987 original. The company needed a seller, but the Brussels-based distributor was hesitant.

“I was sceptical initially due to not knowing what the quality of the shirt was going to be like,” admits Eck, who set up rb-jerseys.com three years ago. “But once I saw their first sample, I was on board.”

NR set the price at an eye-watering £200. Buyers were naturally dubious to pay such an amount for a reproduction, even if a high quality one made by the original manufacturer. But sales increased through word of mouth, with people praising the workmanship of the shirt via social media. Eventually Eck sold out of the first batch of 50 shirts towards the end of last year. A further 100 were released in June and sold out within a week.

“I was surprised this year’s consignment sold out so quickly,” he says. “Last year, people took their time to buy one, but I guess people saw how good the shirts looked and wanted one themselves.

“Many Napoli supporters want a shirt from Maradona’s time, but original replica shirts from the 87-88 season can cost over €1,000.”

In light of their success, further reproductions are in the works between Eck and NR. First up is Fiorentina’s 1984-85 home shirt, worn with authoritative elegance by the legendary Brazilian midfielder Socrates. More Napoli remakes are also planned, with the 1990-91 home and third shirts  – the last campaign with the iconic Mars sponsor and the dying days of Maradona’s reign – to be released later this year.

Recently, there’s been a growing concern among collectors over the escalating cost of buying shirts. A jersey that would have cost £75 a decade ago can now fetch three or four times that amount. As the market leader, CFS tends to set the pricing template for vintage shirts. Amateur sellers on eBay, Facebook and Depop, who don’t have the same operating costs as CFS, then replicate this. But does Bierton believe the bubble will eventually burst?

“I don’t think it ever will, but at the same time I don’t think the growth there’s been in prices over the past decade can be necessarily repeated in the next ten years,” he admits. “I can’t really envision a day when the going rate for a Juve 1995/96 home shirt is £500. There surely has to be some sort of limit, but as long as we can get the shirts in at the right price, then we don’t have to increase the price ourselves. There’s a market underneath us that bubbles away and therefore pushes our prices up.

“In the next 10 years, there’ll be a growth, but not the same as the previous 10. It won’t be a case of prices going up by 50% year on-year. I think we’ve had a big spike in the past couple of years and that will settle down a bit, but there’s definitely an investment opportunity, if you are willing to hang on to shirts for longer.”

Inching ever closer to finishing my collection, I wonder what lies in store once the last remaining shirt lands through my letterbox. Will there be a sense of contentment as I gaze at my expensively assembled rail of fabric? Or is there an inevitability that another list will be formulated? After all, for many, the hours, days and weeks of trawling the web for a specific shirt is arguably the greatest facet of collecting. The juice is in the journey, not the final destination.

“I’ve met collectors who have finished their collections and they have that stark realisation when they realise they’ve completed their list and now it’s ‘What do I do now? Do I start a new collection?’

“The beauty of it is, every season clubs release new shirts and one or two in the bunch become collectable shirts that everyone will want to own. In essence the cycle continues. There’ll be years you think you don’t want a new shirt, but then something happens and the years pass and then you look nostalgically on that time and you think, ‘actually I’ll buy that shirt now’.”