On the surface, the last two years at Watford have appeared something of a shambles. The Hornets chose not to extend Slaviša Jokanović’s contract after he led them to promotion from the Championship, and then Quique Sanchez Flores and Walter Mazzarri were each afforded just a single season in the hot seat, with speculation over their positions disrupting the final few months of their tenures.

But this particular brand of short-term thinking seems to be working for Watford. Sanchez Flores guided them to 13th in their first season back in the Premier League, while last year’s 17th-place finish (six points above the drop zone) disguised the fact that the club were never really in any danger, unlike Mazzarri. The former Napoli and Inter Milan manager must wonder where it all went wrong.

Mazzarri was replaced by Marco Silva in May in what looks to be a gamble for the former Hull boss given the brief reigns of his predecessors. He is clearly a man who backs himself, having taken over an impossible situation at Hull and almost mounting a miraculous escape. Silva did enough (21 points from 18 matches with a team that had picked up 13 points in the first 20) for his reputation to remain unscathed by the Tigers’ relegation, but Watford’s owners have high expectations.

The club has taken an interesting approach to transfers this summer, focusing on English talent with the permanent signing of Tom Cleverley and the additions of Will Hughes and Nathaniel Chalobah. The latter two, recruited for a combined £13 million, look a shrewd investment to strengthen the first team in the immediate future and command a healthy profit down the line. Likewise Kiko Femenía is a solid acquisition from La Liga side Alaves.

You sense Watford aren’t done yet, though, with competition required at full-back and in attack. Troy Deeney scored 10 goals in the Premier League last season, but an assortment of alternatives and understudies – Isaac Success, Jerome Sinclair, Mauro Zárate, M’Baye Niang, Odion Ighalo, Stefano Okaka – managed just seven strikes between them. Roberto Pereyra’s return to fitness should help in that regard, while Watford fans may also be relieved to see that Christian Kabasele appears to have been given the nod ahead of Younes Kaboul at centre-back in pre-season.

Silva has shown he is capable of getting the best out of what he has available and will aim to bring the same organisation he oversaw at Hull (the 4-0 and 7-1 capitulations to Crystal Palace and Tottenham aside) to a team that conceded 16 times in a six-game losing streak at the end of last season. Unless he manages a good start – with Liverpool, Man City, Arsenal and Chelsea all coming up in the first nine games – Silva can be sure murmurings about his future will soon begin.

Michael Moruzzi: Watford have survived the past two seasons since their promotion without much bother, but finished the last campaign in woeful form. To reverse that trend they must find a consistency that was sorely lacking last year.

Marco Silva’s immediate task is to establish some team spirit within the squad, and to deal with individuals that threaten to disrupt it. The signings of England Under-21 midfielders Nathaniel Chalobah and Will Hughes are an exciting change of transfer policy, although more firepower is needed to reduce the burden on Troy Deeney.

Most exciting for the fans is the return from injury of Roberto Pereyra – a player with the talent to make the difference in tight games, which Watford desperately needed last season. 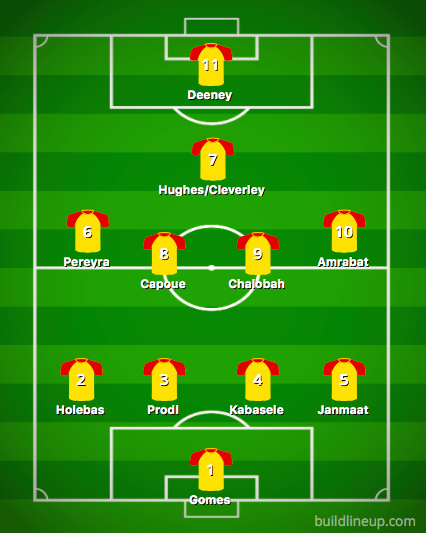 Matt Stanger: 9th. Marco Silva demonstrated his managerial aptitude in a short spell at Hull last season and Watford pipped Crystal Palace to what could be the appointment of the summer. While some pundits were unconvinced at the time of his appointment, few were unsure of his talent by the end of the campaign. I’m fully expecting him to whip Watford into shape in what should be a much more competitive season from the Hornets.

Daniel Storey: 16th. “Marco Silva, we’ve got… Marco Silva.” What the Hull City fans chanted in March, April and May, Watford fans will sing in August. The Portuguese vastly improved his reputation despite the ignorance that surrounded his appointment. Having finished 17th under Walter Mazzarri, I’m backing Watford to improve that by one position in 2017/18. Hardly consolidation, but Premier League survival is good enough for now.