Following Bob Bradley’s disastrous 85-day reign in Wales, Paul Clement’s appointment on January 3rd saw Swansea save themselves with a remarkable upturn in form. They had won only three matches all season up to that point, but claimed nine victories in the last 19 games – including a 3-2 win at Anfield – to climb out of the bottom three and condemn Hull to relegation.

The most impressive aspect of Swansea’s recovery was how they fought back from six winless fixtures over March and April, which started with a 2-1 defeat to Hull, to surge to safety with four wins in the final five matches and a 1-1 draw away to Manchester United. If they show the same resilience this season, they should be able to stay above the bottom three.

The biggest problem Clement faces is the seemingly inevitable loss of Gylfi Sigurdsson, who scored match-winners away to Liverpool and at home to Southampton, plus the late equaliser at Old Trafford, in Swansea’s great escape. With nine goals and 13 assists in total, his contribution and dead-ball skills will be sorely missed, especially by target man Fernando Llorente.

The striker has also been linked with a move, possibly to Chelsea, and retaining the Spaniard following his 15-goal haul last season is absolutely vital. Jordan Ayew scored only once in 14 appearances after arriving in January and a lack of goals could thwart Swansea’s hopes of progress. Tammy Abraham hit 23 in 41 Championship matches for Bristol City, but Clement will surely be looking for another forward to avoid relying too heavily on the 19-year-old Chelsea loanee.

Roque Mesa is highly rated from his time at Las Palmas, but will need to curb the enthusiasm that saw him pick up 14 bookings in La Liga. Swansea perhaps look a little light on numbers with Jack Cork and Jordi Amat leaving, along with Borja Baston, and it will be interesting to see how much of the £50 million Sigurdsson windfall Clement is allowed to reinvest.

Bobby Gardiner: We Swansea fans, after a turbulent few seasons, are hoping for a return to the club’s early Premier League years: a comfortable mid-table finish via attractive football. Under the promising leadership of Paul Clement, and with the signings of Roque Mesa – Leon Britton’s long lost Spanish cousin – and Tammy Abraham on loan, it looks as if next season could give us just that.

The main question mark is whether the money raised from talismanic Gylfi Sigurdsson is reinvested well if Everton bid above our £50m reserve price. Swansea’s new American owners are still keen to win over the supporters – this season is their opportunity to do so. I’d predict 12th-16th, or 14th with a gun to my head. (Editor’s note: No one put a gun to Bobby’s head.) 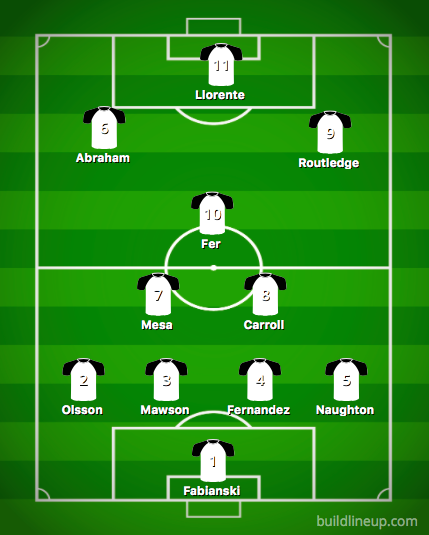 Matt Stanger: 19th. The expected loss of Gylfi Sigurdsson will be a huge blow to Swansea’s hopes of survival. Paul Clement did an excellent job in keeping them up last season, but so far he is yet to really strengthen the spine of a side that conceded more goals than everyone but Hull. I think this is the year the Swans have their wings clipped.

Daniel Storey: 17th. A table created from the date Paul Clement was appointed (January 3) sees Swansea in eighth position, offering real hope of improvement on 15th place. Unfortunately, the probable loss of Gylfi Sigurdsson would counteract that positivity, and Clement will be desperate for the ‘Fernando Llorente to Chelsea’ rumours to go away. At the time of writing, I see them surviving but hardly thriving.