It’s difficult to take too much from the opening day, but hosting West Ham may be a good test of whether Manchester United can consign last season’s ten tedious home draws to the history books.

Jose Mourinho’s side were held by six bottom-half teams at Old Trafford – the Hammers, Burnley, Hull, Stoke, Swansea and West Brom – and scored only 54 goals throughout the campaign, 23 fewer than Arsenal a place above them. Recruiting a new striker to replace Zlatan Ibrahimovic and shake up the system was vital for Mourinho this summer.

It may turn out to be a serendipitous twist of fate, with Lukaku bringing proven Premier League experience and a haul of 85 goals over the past five seasons. It is some record for a 24-year-old, and one that convinced Mourinho to forget any concerns he had about Belgian during their time together at Stamford Bridge.

Lukaku possesses the quality to spearhead a renewed push to break back into the top four, but whether it will be enough to mount a title challenge is another matter entirely. United were way off the pace for most of last season, suffering an interminable spell in sixth place, and Mourinho has repeatedly expressed the need to bring in several more new faces.

Victor Lindelof should overcome his shaky pre-season displays and Nemanja Matic, who rejoined Chelsea from Benfica in 2014, can possibly advise his new teammate on the step up from the Portuguese league. The Serbian is an excellent addition to anchor the midfield and suggests Mourinho has a clear vision for how he wants his team to set up in the centre, having returned to his former club to sign the 29-year-old for £40 million.

A return to the Champions League brings additional pressure and, despite last season’s success in the cups, you suspect Mourinho would be disappointed if United don’t challenge for elite European glory, the Premier League title, or both, in his second campaign. Should it be another season in sixth, the blame game could be very entertaining indeed.

@Doc_Joshi: With the additions of Romelu Lukaku and Victor Lindelof, I think Mourinho is right that United are better equipped for a title challenge, but it will be dependent on more than just new signings. Lukaku is an interesting acquisition for many reasons, particularly for what he does for the side’s style of play as a whole. He has looked impressive playing on the shoulder of the last defender and running in behind, which represents a shift in the way United will play compared to last season when Zlatan Ibrahimovic operated impressively as a traditional target man.

Some sections of social media have written Lindelof off already (because every mistake requires a knee-jerk reaction) but Mourinho has a decent record for picking out defenders. He may have teething problems (a polite description of his wonderfully graceless challenge that sent Theo Hernandez flying against Real Madrid) but so did Nemanja Vidic and Jaap Stam and they turned out OK.

The most exciting aspect for me is the makeup of the squad. There is a good mix of experience, talent and potential with many of our core players yet to reach their peak. This is where Mourinho will earn his wage as a coach. In order for us to become title challengers it will take more than a couple of signings; he needs to get more out of what he has.

The flexibility in formations we’ve seen in preseason will be key to navigating the Premier League and Champions League campaigns but at this stage United do not look ready to win either. Whilst the fan in me is cautiously optimistic that we can win the quadruple (as I am every year), the realist says we need two more signings to be considered genuine contenders. (Editor’s note: This was written before Nemanja Matic signed.) 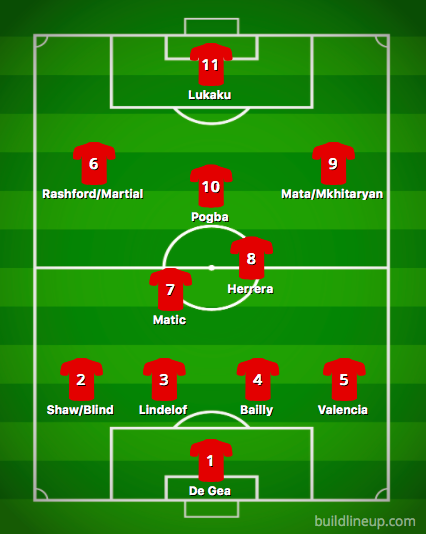 Matt Stanger: 3rd. After a long summer overseas, you wonder if United will be ready to hit the ground running when they face West Ham on August 13th. They were reliant on Zlatan Ibrahimovic for goals last season, and a change of system with Romelu Lukaku leading the line could take time to click. I think United will improve considerably, though, and may perhaps target the latter stages of the Champions League with the Premier League title just out of reach.

Daniel Storey: 2nd. On paper, a title challenge seems ambitious. United finished seven points off a top-four place and 24 points behind Chelsea in 2016/17, and never looked likely to end a four-year title drought. Yet not only does Jose Mourinho usually peak in his second season, but so too might Paul Pogba, Henrikh Mkhitaryan and Eric Bailly. With David de Gea retained and Romelu Lukaku, Nemanja Matic and Victor Lindelof added, an assault at the league is the minimum expectation. Second in the league and a run in the Champions League might be considered adequate progress.