Last season didn’t exactly go to plan for Manchester City and Pep Guardiola. They began the campaign in devastating form, winning their first six Premier League matches by an aggregate score of 18-5, and delivered a commanding performance in a 2-1 victory at Old Trafford. However, City managed just one clean sheet in that run, hinting at the problems that would hinder them both in domestic competition and Europe.

A 3-1 defeat at home to Chelsea at the start of December saw their rivals take the initiative in the title race, with City’s woes exacerbated by a 4-2 loss at struggling Leicester in their next outing. John Stones, a £47.5 million signing from Everton, was embarrassed in a 4-0 thrashing by his former club in January – along with the hapless Claudio Bravo – while a 3-1 defeat to Monaco saw Guardiola’s side exit the Champions League by virtue of away goals having conceded three in the first leg at the Etihad Stadium.

Bravo in particular never looked settled and it is little surprise that City have moved to rectify that mistake by bringing in Ederson for a world-record fee for a goalkeeper. The former Benfica stopper displayed shades of his Chilean counterpart when he rushed out of his goal in the friendly against Manchester United and was rounded by Romelu Lukaku, but other than that he has looked composed in pre-season.

Much has been said about Guardiola’s £130 million splurge at full-back, but finding upgrades in those positions has been long overdue. Kyle Walker and Benjamin Mendy will provide width and support to allow City to stretch the play in the opposition half, creating space in the centre for the supremely talented Bernardo Silva to weave his magic. The Portuguese playmaker is the perfect heir to David Silva’s throne.

Despite the big business, there is a sense that City aren’t yet the finished article, and Guardiola is still keen to bring in a new centre-back. Vincent Kompany’s fitness issues mean he can’t be expected to play a full season, while Eliaquim Mangala is available for transfer and Nicolas Otamendi looked out of his depth in key games last season. A new partner for Stones, one who is fairly experienced, remains a priority.

Pre-season has gone well, but there will be no hiding for this expensively assembled City side and their manager once the campaign begins. Third place and 78 points was perhaps a poor return last season, although Guardiola did take over a team that had managed just 66 points in 2015/16. This time out, there won’t be any room for excuses.

Will Unwin: Last season was fantastic fun under Pep Guardiola, it’s just a shame the defence wanted to make sure it was equally amusing for opposition fans. Now the full-backs have all been cleared out things are looking up, with Guardiola finding players capable of operating in his system.

The main issue is still at centre-back, as John Stones tries to work out who he wants to be, Nicolas Otamendi struggles to repress the urge to dive in and, most importantly, Vincent Kompany faces another battle to stay fit for an entire season. If he does then City will become title favourites, as he provides confidence and stability to the team.

Ilkay Gundogan will be pivotal in midfield as he gave City the dynamism needed in his brief spell of not being injured. The forwards will sort themselves out as they’re just so blooming good, they just need the support of those at the back to ensure City improve on last season. As long as the defence becomes disciplined (in its own way) then I’m more than confident that City will win the league. 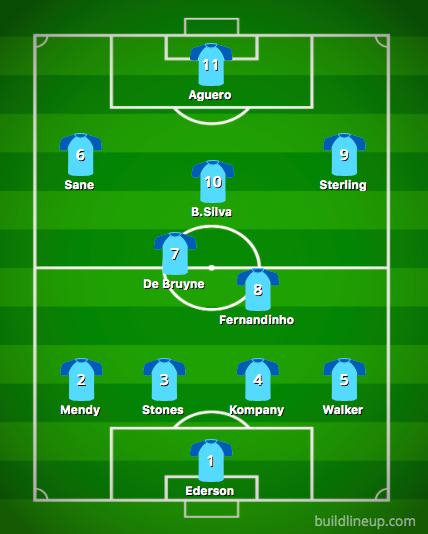 Matt Stanger: 1st. A year on from Pep Guardiola’s arrival in Manchester, the City squad should have a greater understanding of their manager’s demands. Those who weren’t up to the task have already made way, with several more set to follow. The number of changes to the first XI, especially in defence, could mean City start slower than last season, but if Bernardo Silva clicks with Kevin de Bruyne and Sergio Aguero (PL top scorer – Sergio Aguero 7/1 William Hill), that trio can win matches on their own.

Daniel Storey: 1st. I ummed and ahhed between first and second, but have been persuaded by Pep Guardiola’s claim that City will buy another central defender. That would leave him with four of last season’s back five replaced, and City surely deserving title favourites. Guardiola has the best attacking options of any manager in the league and with a more reliable goalkeeper and infinitely better full-back options should improve their fairly miserable record of two wins in ten games against the top six. They are also the only one of the top three teams in the betting to play in both the Premier League and Champions League last season – it will test Manchester United and Chelsea.