It’s been a busy summer at Crystal Palace following Sam Allardyce’s retirement from club management and the intriguing appointment of Frank de Boer as his successor.

De Boer struggled at Inter Milan last season and was sacked after only 85 days following a run of four defeats in five Serie A matches and a miserable 2-0 loss at home to Hapoel Beer Sheva in the Europa League. The Dutchman is still seen as a coup for Palace, though, owing to a largely successful spell at Ajax.

Leading the Eredivisie club to four successive league titles from 2010 to 2014, De Boer was an exponent of Ajax’s traditional 4-3-3 system, blending youth and experience to dominate the division at the start of his reign. His pre-season line-ups at Palace, however, have indicated a switch to 3-4-3, similar to the counter-attacking formation that saw Chelsea charge to the title.

In Andros Townsend, who has popped up at wing-back in recent friendlies, Jeff Schlupp, Patrick van Aanholt and Joel Ward, Palace have plenty of pacy options down the flanks. The new system marks a change in culture throughout the club, with development coach Richard Shaw revealing that the youth teams will also adopt 3-4-3 as the young Eagles compete for first team opportunities.

In the transfer market, De Boer has put his faith in youth, signing the talented Ruben Loftus-Cheek on a season-long loan from Chelsea and returning to Ajax to bring in £8 million defender Jairo Riedewald. He will no doubt be searching for further additions, especially at centre-back, as he looks to avoid the disastrous start he suffered in Italy.

Palace were doomed before Allardyce’s appointment last season (and for the first five winless games of his tenure), but mounted a run of six wins from eight matches from the end of February to the end of April to climb out of danger. That included victories away to Chelsea and Liverpool, plus a 3-0 stroll at home to Arsenal. There is talent in this squad but, as De Boer will likely find out, a lack of consistency is often Palace’s undoing.

Greg Lea: There is a quiet optimism around Selhurst Park ahead of the new season. Palace, quite frankly, should have done much better last time out, with a talented squad guilty of underachievement for much of the campaign. There is reason to believe things will be different this term, though: Frank de Boer is a progressive appointment and talented youngsters Ruben Loftus-Cheek and Jairo Riedewald are exciting additions, while Wilfried Zaha’s decision to stay put has seen his popularity rise even further. A goalkeeper, centre-half and back-up striker are still required, but Palace have the makings of a solid mid-table side. 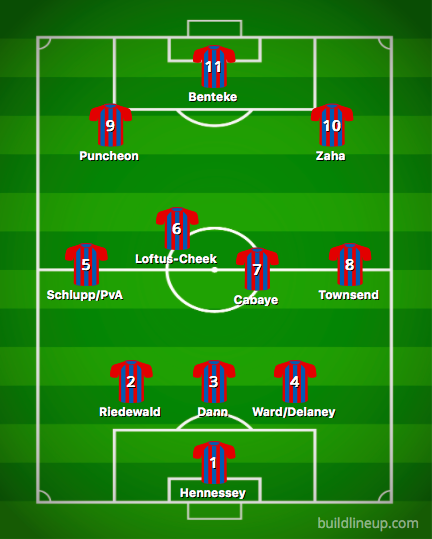 Matt Stanger: 14th. It’s unlikely Palace will adapt immediately to De Boer’s new system, but they will need to pick up points at home to Huddersfield, Swansea and Southampton in the opening weeks of the season. After that, it’s Man City and Man United away, followed by Chelsea at home. A slow start could see them dragged into another relegation battle, but De Boer deserves to be afforded longer than the 85 days he enjoyed at Inter.

Daniel Storey: 15th. When Palace beat Hull City in their final home game of the season to confirm their survival, supporters will have looked forward to a summer of serenity. Instead, Sam Allardyce has left and Frank de Boer has arrived. De Boer has pedigree, but this is his first season in English football and he has a completely different style and managerial strategy to Allardyce. It may take time for Palace’s squad to get used to De Boer’s demands and, while Palace won’t go down, the top half will surely be a step too far.

(Think Palace are going down? You can back them for relegation at 11/2 with Bet Victor.)