This will be Burnley’s fourth season in the Premier League and the first time they have enjoyed back-to-back top-flight campaigns since the mid-Seventies.

The club’s recent success is mainly down to the shrewd management of Sean Dyche, with the former Watford boss twice leading the Clarets to promotion from the Championship. Last season he oversaw a comfortable 16th-placed finish, which included an impressive victory against Liverpool at Turf Moor and draws with Chelsea and Manchester United.

Those occasions against the division’s heavyweights are what Burnley live for. With a relatively modest budget and stadium, each season is about consolidating their place in the Premier League, and this year will be no different. But they also relish their underdog status, possessing the industry – and attacking threat through Robbie Brady’s set-pieces, the strength of Sam Vokes and Andre Gray’s eye for goal – to cause problems for anyone.

Charlie Taylor is a smart addition at full-back after his Leeds contract expired, and is likely to replace Stephen Ward in the first XI, providing support for Brady down the left flank. At £10 million, Jack Cork’s price tag has been derided in some quarters, but the 28-year-old is in the prime of his career and established himself as a consistent Premier League performer at Southampton and Swansea after two spells on loan at Turf Moor in 2010 and 2011.

Stoke old boys Jon Walters and Phil Bardsley may look like two of the least inspiring signings of the summer, but they add depth and experience to a squad that is largely well-equipped for a relegation dogfight. If Burnley can bring in another centre-back to replace Michael Keane, and a striker to compete with Gray, Vokes and Ashley Barnes (possibly Danny Ings on loan?), then it might never reach that stage.

David Speak: No doubt it’s going to be a tough season as we continue to operate sensibly in what is an increasingly crazy transfer market. Dyche has brought in some experienced Premier League grafters in Walters, Cork and Bardsley, alongside the promising Charlie Taylor, but it remains to be seen how much the loss of Keane will affect us.

Keep hold of Andre Gray (PL top scorer – Andre Gray, 150/1 with Bet365), and bring in a quality centre-half and a new wide man, and we’ve got the basis of a solid squad. The biggest risk is losing our manager, who has done more than enough to attract the attention of ‘bigger’ clubs. Keep Dyche, strengthen with one or two more, and I would expect there to be four or five teams worse than us in the league this season. 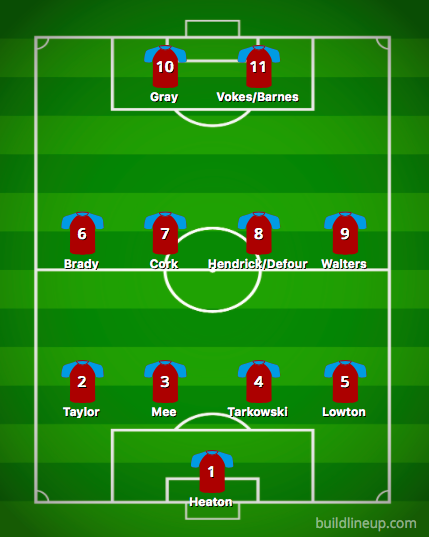 Matt Stanger: 15th. Thanks to Michael Keane’s £25 million move to Everton, Burnley have enough money to bring in two or three additional reinforcements. A new centre-back remains a priority – with questions remaining over whether James Tarkowski is ready for the step up – but the general sense of continuity at Turf Moor should ensure the Clarets keep their heads above water. Looking at the players in this squad, you’d think they’d be disappointed to miss out on a survival scrap.

Daniel Storey: 18th. I don’t like predicting any team to go down, but Burnley really do worry me. Michael Keane has left for Everton and Andre Gray’s new contract has still not been signed. From the start of February onwards, Sean Dyche’s team took only 11 points from 15 matches. Addressing that slump will be harder than ever without their best defender. Burnley were saved last season by their early-season home form – expecting a repeat is highly optimistic.

(Agree with Daniel? Burnley are 13/10 for relegation with Bwin – bet here)