It might seem like it’s been a quiet summer at Bournemouth but that’s because the club acted quickly to tie up their key signings.

With Artur Boruc making more errors leading to goals than any other Premier League player over the past two seasons, it was vital for Eddie Howe to find an upgrade between the sticks. Asmir Begovic looks a shrewd addition at £10 million.

Nathan Ake has also returned from Stamford Bridge for £20 million – a hefty price tag for a defender with only 41 Premier League appearances, but one Bournemouth could eventually make a profit on.

Meanwhile, Jermain Defoe (66/1 to be PL top scorer with Bet365 – bet here), who kick-started his career with 19 goals for the Cherries during a loan spell from West Ham in 2000/01, will aim to maintain the strike-rate that has seen him score 15 times in each of the last two seasons for a dreadful Sunderland side.

If 2015/16 was all about survival in Bournemouth’s first-ever top-flight campaign, last year was a season of consolidation. Although the Cherries added only four points to their total in 2015/16, that was enough to see them leap seven places to ninth, with the club’s negative goal difference also reduced by 10.

Josh King’s 16 goals, including 13 in his last 16 matches, were central to that improvement. The 25-year-old has been linked with a move to Tottenham, but Howe looks likely to hold on to a player he signed for nothing when his contract at Blackburn expired in 2015.

Having scored more Premier League goals than Manchester United in 2016/17 (55 to 54), Bournemouth always hold an attacking threat and put six strikes past Hull, as well as four past Liverpool and Middlesbrough, in victories last season.

But it was the thrilling 3-3 draw against Arsenal in January, in which they allowed a 3-0 lead to slip, and 6-3 defeat to Everton that highlighted where their weaknesses lie. Only four clubs shipped more goals than Bournemouth’s total of 67 conceded and, while the Cherries are easy on the eye – with the seventh highest passing success rate in the division – there are still concerns regarding the team’s backbone.

Howe has moved to address those with the signings of Begovic and Ake. With fixtures against Man City and Arsenal in the first four matches, his defensive reinforcements will soon be tested.

Will Pardoe: I’d be unhappy if we finished outside the top 10 and, with Eddie at the helm, I see no reason why we can’t push for a place in Europe (top six – 33/1 Bet Victor). I’m very happy with the progress so far this summer. Begovic is a great signing and I’m absolutely over the moon with Nathan Ake returning. I am entirely convinced he will win the Ballon D’or in his lifetime!

But I’m disappointed we haven’t been in for Jack Wilshere, given Sampdoria offered well under £10 million. I went to Swansea away near the end of last season and made a point of watching him like a hawk, and I swear to you he didn’t lose the ball once. He would be welcomed back with open arms. 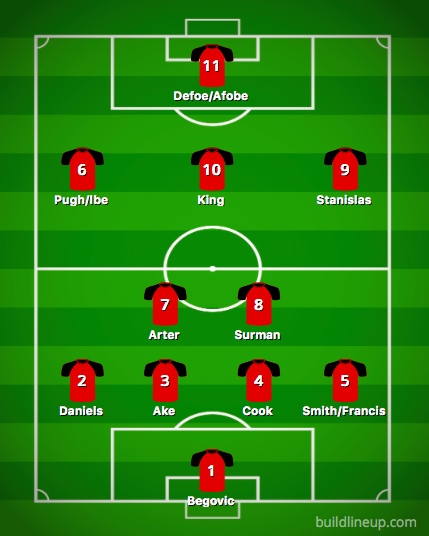 Matt Stanger: 10th. While mid-table rivals Southampton, Leicester, Watford and Crystal Palace have all appointed permanent new managers this summer, Bournemouth will benefit from continuity under Eddie Howe. They have recruited well, focusing on quality rather than quantity, and also have Callum Wilson to come back from his second cruciate knee ligament injury in the space of 16 months. Hopefully the striker makes a full recovery as Bournemouth target another top-ten finish.

(Think Bournemouth will struggle? You can back them for relegation at 13/2 with Sky Bet)

Daniel Storey: 11th. Bournemouth will be hoping to improve on their ninth-placed finish from 2016/17, but even with the arrivals of Jermain Defoe and Nathan Ake that will be difficult. Yet – and it might sound patronising – that we are not even mentioning Bournemouth in the same breath as the bottom three indicates the dramatic improvement under Eddie Howe.

Bournemouth are now a consolidated top-flight team, and the extraordinary achievement that represents should not be overlooked. A list of the eight players who started the most games in their League One promotion campaign of 2012/13 includes Steve Cook, Harry Arter, Charlie Daniels and Simon Francis. All four made the same Bournemouth list in 2016/17.