Evertonians haven’t had much to get excited about in recent years. But as James Rodriguez and co have propelled the Blues to the top of the early season Premier League table, even the most pessimistic of Goodison Park regulars have allowed themselves to dream.

Ok, so the chances of James getting his mitts on Everton’s first top-tier championship in 33 years may still be slim (for now), but it has at least got the blue half of Merseyside harking back to days when they were the best team in England.

One man who’s got many happy memories of that era is Paul Bracewell. The ex-England midfielder was a key part of the side that delivered the first of two titles under Howard Kendall in 1985 and tells the What Happened To You? podcast the secret ingredient back then wasn’t a Colombian genius.

“The best way to sum it up is with the film we made recently, Howard’s Way, about 35 years since that period,” Bracewell says.

“Everybody was on that film and everybody turned up at the showing. And after 35 years to get that [turnout] shows what sort of group of people it was.”

Bracewell arrived at Everton just as things were stirring under Kendall. The Blues had just won the 1984 FA Cup and were growing in belief as a team including Andy Gray and Graeme Sharp started to grasp hold of the domestic game. That cup victory would set them on their way.

“When I joined, they’d just won the FA Cup and if you talk to any club or manager, they’ll tell you that first one is the most difficult,” Bracewell explains.

“After the FA Cup, we went on to win the Charity Shield and the rest is history. Once we’d had a taste of success, we wanted more. Day in day out, it was a fantastic team to play with and great lads as well. When you get that combination of people in the dressing room, it’s very very powerful.” 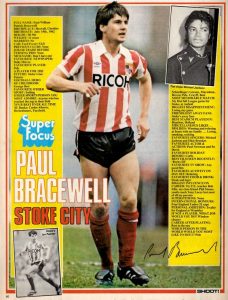 Bracewell’s career appeared to be on the up. He was getting used to that winning feeling – despite losing the first of a record-breaking four FA Cup finals as a player in 1985 – and had a burgeoning international future in front of him.

He was included in Sir Bobby Robson’s training camp 12 months before Mexico 86 and looked to be a shoo-in for the tournament itself the following year.

But that’s when disaster struck. A heavy tackle from Billy Whitehurst that winter left Bracewell needing an ankle operation and left him on the sidelines for the World Cup and changed the course of his career as he struggled to get back to the same level he’d previously been at.

“In ’85 after the cup final, the England squad went to Mexico, which was pre-Mexico 86 and we did two weeks in Mexico in preparation for the World Cup and a week in the USA,” Bracewell recalls.

“I was in that [World Cup] squad, looking forward to it, but there was me and Mark Wright – who broke his leg – who missed out. I had that tackle [with Whitehurst] on 1 January ’86 and struggled to the end of the season. That was the first operation on the ankle to get me back playing. It was a massive disappointment.

“There’s never a good time to get an injury, but I was 22, established and trying to get in the England team and success with Everton, so it couldn’t have come at a worse time for me.”

After nearly two years out, Bracewell moved to Sunderland and played on for another decade in two spells at Roker Park, as well as stints with Newcastle and Fulham.

It was in west London that Bracewell’s career took a slightly more bizarre turn. After taking the reins as manager at Craven Cottage, he was regularly summoned to meet chairman Mohamed Al-Fayed, who was a close friend of Michael Jackson’s (who Bracewell named as one of his favourite musicians in a 1982 Shoot interview, above).

“Every Thursday, I had to go to Harrods to meet him [Al-Fayed],” he says. “The meeting wouldn’t last very long, but at times they were very interesting and very strange. But, he was good with me, even if he did sack me.”

Bracewell later went on to manage at Halifax and form part of the coaching team at Sunderland, before becoming a coaching consultant at Tottenham. It’s been a career that has seen a lot. But never quite another Everton title win… yet.