If you’re planning a trip to the Vatican or the Coliseum in Rome, then prepare yourself. Because on arrival, you will be targeted by people rushing to sell you pieces of cheap metal with coloured bits of plastic on either end, otherwise known as selfie sticks. 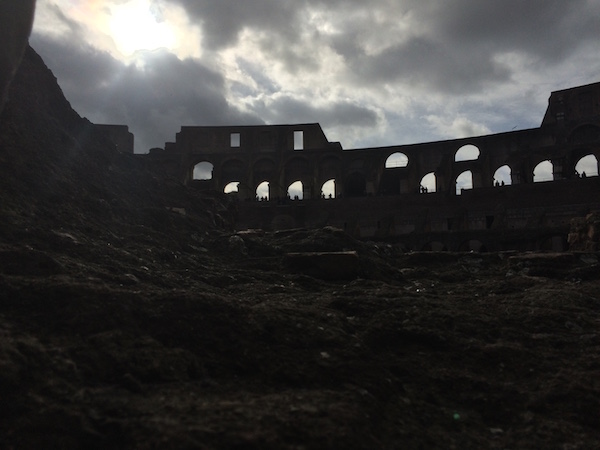 Compensation came, however, with a visit to the city’s other Coliseum – the Stadio Olimpico. And yet, it was here, nearly a year to the day at the shared home of A.S. Roma and S.S. Lazio that the man known as the King of Rome took football’s greatest selfie.

In the Derby della Capitale on January 11th 2015, Roma legend Francesco Totti equalised against arch-rivals Lazio. Guido Nanni, the club’s goalkeeping coach, was then called over from the bench before he gave il Capitano an iPhone. Cue Totti to pose for a selfie whilst thousands of Roma fans in the Curva Sud celebrated behind him. 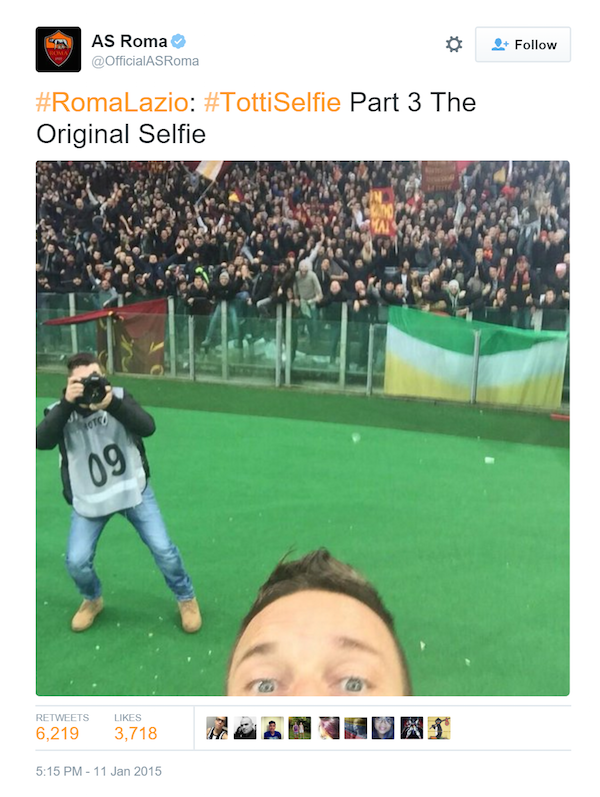 Where millions have tried and failed, Totti succeeded. He made a selfie look cool, merely by the fact that it was him taking it. On Saturday, after 105 days out through injury, Roma’s famous number ten was back in the squad for AC Milan’s visit. But even before that piece of news, we had journeyed to one of the Roma stores in the city centre and bought two tickets at €50 a pop, not bad for a game between two of Italy’s biggest clubs.

On one wall inside the store, Totti’s face is daubed in black and white, which is not all that surprising given that he’s been at the club for so long. In his words, “I was born Roman and Romanista. And I will die that way.”

Twenty minutes before kick-off, the block immediately to our left, the Curva Sud, wasn’t filling up. It usually houses Roma’s hardcore fans AKA the Ultras but not for the first time this season, they were on strike. This time, the team’s performances were the problem, even if the side were 5th, only six points off the top of Serie A. With just one win in their last nine games in all competitions, coach Rudi Garcia has become a scapegoat amongst the Roma fans. When Totti’s name was read out, loud cheers followed, even if he was only a substitute. When Rudi Garcia’s name was read out, there were loud boos.

Those same supporters were cheering soon after Antonio Rüdiger volleyed the home side in front four minutes in. That didn’t mean I got to see much of the goal, thanks to the large frizzy hair of the over-excitable girl in front. To my right, a well built and well-groomed man lit a cigarette in celebration.

But both our frizzy friend and our smoking pal were less than satisfied with just a one goal lead. Each time Roma missed a good opening or lost the ball, Smoking Man said a rude Italian word that I can’t translate here. The frequency of this increased as the match went on, particularly when Milan equalised at the start of the second half through Juraj Kucka.

Despite being in the Roma end, a few Milan fans could be heard cheering behind us. Not all of them were away supporters. Chuck is a larger than life cop from Florida we met on the cramped bus back from the stadium. This was the first game he’d seen in Europe and he didn’t realise that the teams switched ends at half time. So he stood up and cheered Milan’s leveller. It’s okay. He’s still alive. The Roma fans were too intent now on voicing their displeasure at Garcia and calling for Francesco Totti to come on. As the whistles and catcalls grew louder with each misplaced pass, he was summoned. 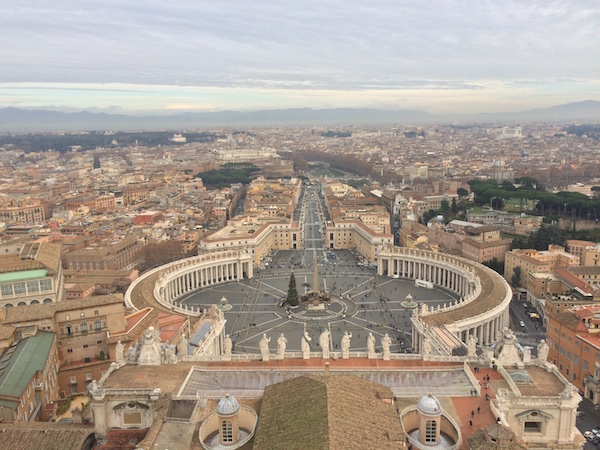 Out trotted the King of Rome in front of his loyal subjects. Our frizzy haired friend celebrated as if Roma had scored again. To be fair, by setting foot on the pitch, it was Totti’s 592nd Serie A appearance. Only Paolo Maldini and Javier Zanetti are now ahead of him in the all-time list. Perhaps that’s worth celebrating.

His short cameo wasn’t. The 39-year-old fitted in seamlessly with his team-mates by failing to control the ball on several occasions. No swearing this time from the Smoking Man because evidently, you don’t swear at the King.

Ear piercing whistles and more booing greeted full time. Several seagulls circled over the top of the Stadio Olimpico but they might as well have been vultures, such is Garcia’s predicament.

The time of Totti will continue though, even if at 39, his career is in the final furlong. James Horncastle said in 2010 that: “Roma without Totti would be like Rome without the Coliseum,” and he’s right. The only difference between the tourist attractions and il Capitano is that no-one stands around Totti trying to sell you selfie sticks.

Archie has now returned to Germany after his Christmas break and Our Man in Cologne will continue next week.