My train wasn’t moving in Düsseldorf station, but the people inside certainly were. Passengers stared in horror as approximately 25 young men exchanged blows and the dull thud of fists on flesh echoed around the carriage.

Thirty seconds in, a young man towards the back of the melee shouted, “Bullen!” That’s a derogatory term for the police, who were on their way. Immediately another one hollered out “Schalker Raus” (Schalke out!) and the mob of plain clothed thugs swiftly departed

The fight lasted no longer than a minute, but the woman next to me was furious. Unintimidated, she yelled at them as they scurried off. To her frustration, the train for Dortmund was going to be delayed.

“There is a football match today between Borussia Dortmund against Schalke. It’s a really big derby and this is what happens between their fans,” she said, gesticulating towards the middle of the carriage where approximately ten guys in their early twenties sat dazed. One was badly bruised down the right side of his face. Another rose to his feet, gritted his teeth whilst emitting a low growl as he looked out the window, hoping to spot his ambushers.

I’d joined the train at the same time as them in Cologne. All that really distinguished them then was the high percentage of them wearing baseball caps. Local newspapers would later identify the group as Köln (Cologne) Ultras – and Ultras in Germany are football fans you do not want to cross.

Some of their Schalke counterparts had come from the far end of the carriage whilst the rest came from the end where I was sat. For a motive, look no further than Borussia Dortmund’s “Fanfreundschaft” (fan friendship) with Köln.

These exist around Germany resulting in something that is considered one of English fandom’s great evils – the half-and-half scarf. Such declarations of these friendships can be found around the country. Bayern Munich for instance have one with second division VfL Bochum but it was Köln’s bond with Dortmund that was enough reason for the Schalke Ultras to attack, a good 40 miles away from where the game was taking place.

Former Dortmund coach Jürgen Klopp had referred to it as “the mother of all derbies”, as had current Schalke coach André Breitenreiter. It was just a shame to discover that, like most clubs, you can also find amongst them a minority of morons.

This though was the sort of game to watch with the fans who weren’t beating each other up. So I went to meet Dortmund fan, Tim. He grew up in the city and still works there today. He’s stood on the club’s famous yellow wall since he was small. He is a true “Dortmunder Jung” (Dortmund boy) and there is a fiery pride that burns inside when he talks about his club.

I didn’t have a ticket to the game but I’d been assured by a friend to meet Tim because he was excellent value and a good person to be with if I wanted to get into the game.  A few hours with Tim, his wife Carolina and his other Dortmunder Jungs confirmed that view.

Somehow, they balanced their passion for Dortmund and intense dislike for Schalke without fighting with rival fans on the way to the stadium. That said, Tim’s mate, who went by the unexplained nickname of Milmo, did plant a few stickers on road signs en route to the stadium saying “Death and Hatred to Schalke!” Milmo, however, proved rather nicer than those words indicated as we drank outside their pre-match haunt a short hop from the Westfalenstadion.

There, Tim came up with a plan for tickets for me and for his wife Caroline, who also lacked one. Tim explained that this was the hardest game of the season to get a ticket for, but an hour and a half before kick off, he spotted an avuncular looking Austrian man called Gerhart. He held two tickets aloft as he negotiated with a dishevelled figure determined to pay €100 for his two tickets. Tim caught Gerhart’s eye, said “€120” and they were ours.

The stereotype of Bundesliga season tickets costing around €100 is not entirely true. Tickets for individual games can be expensive but Tim had struck a good deal. We’d paid €60 (around 40 quid) for each. Their face value was €57.50 and with some shadier characters nearby shouting €120 per ticket, it looked even better.

Tickets for the fixture were a controversial matter in the build up with some of Schalke’s hardcore boycotting over a reduced allocation and restrictions placed on them on for match day. Events on the train made me more understanding of the former but Borussia Dortmund’s Südtribüne (“south stand”) unveiled a banner before the game in solidarity with their Schalke counterparts.  Had it been in England, the home fans would have probably just shouted something coarser along the lines of “your support is not very good” for bringing less fans.

It was from the Nordtribüne (“north stand”) that Tim and I watched the banner and the game unfold. This was a tough experience for Tim, only the fourth time he had gone to Dortmund and not been on the Südtribüne. He’d given his season ticket to Carolina for the day now to come sit with me, no small gesture. 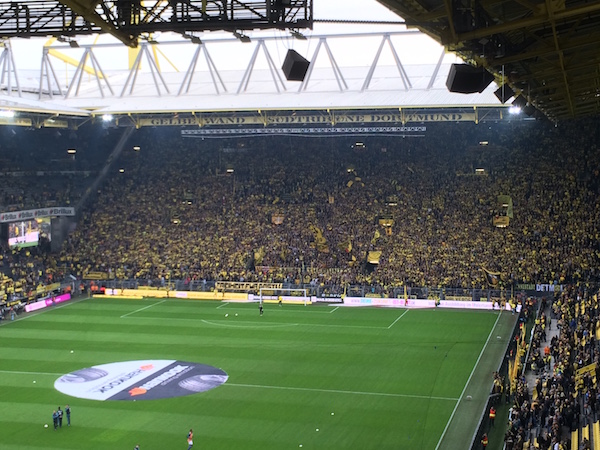 From here, he could at least gaze right into the heart of the yellow wall. Well, he could when he wasn’t disappearing down into the concourse to relieve himself. On each occasion though, he returned with more beer. Tim is not one to waste a journey.

Neither it seems is midfielder Shinji Kagawa. On a rare foray into the six yard box, the diminutive Japanese playmaker headed in Dortmund’s opener after a cagey first half hour. Tim went nuts, his face going bright red with joy as all around clad in black and yellow bobbed up and down with glee.

To Tim’s left, the 5,000 Schalke fans who’d made the 24 mile journey from Gelsenkirchen fell silent but there were more specks of royal blue around the ground. Even the fiercest of rivals can coexist in close proximity it seems. Indeed, two in the row in front of us were celebrating a few minutes later when Klaas-Jan Huntelaar equalised at the other end. Tim was the one leaping up though before half time, as Matthias Ginter, a Dortmund fan when he was younger, headed the home side back ahead.

More wild scenes followed when Pierre-Emerick Aubameyang struck a third shortly after the break. Huntelaar pulled one back before the end but by full time, Dortmund had won and Tim bore the same crazy level of excitement as every other Dortmunder in the stadium.

A deafening chant of “Derbysieger” (“Derby winners”) rang around, with Tim one of the louder singers. It continued outside the stadium too and was still ringing around my head when I took the train back to Cologne a few hours later. The memories of a great derby experience would stick but so to would what I’d witnessed en route to the game – an altogether darker side to German football.