Robin Hood was there. So was Minnie Mouse. Heck, you could even see cowboys, Indians and sailors if you wandered around Cologne on Saturday afternoon. It was Sommer-Karneval, the one day sister-festival of Karneval which revolves around dressing up and drinking a lot of beer – something the people of Cologne do well.

On Saturday though, the people I went to meet had tried to kick me on our last encounter. Five years ago, a bunch of Hamburg fans didn’t like the look of me as I walked over Putney Bridge in south-west London, after they’d lost to Fulham in the Europa League semi final. They were much nicer on Saturday. Well, when I met Andreas, he certainly was.

He’d told me the Hamburg fans would be gathering at Boogaloo, the bar for Cologne-based Hamburg fans. I got there at twenty to one. There were a good hundred or so Hamburg fans in boisterous mood ahead of their match against Cologne.  Being the caring types, 25 police officers had decided to come too, along with seven police vans lined up opposite the bar for good measure. 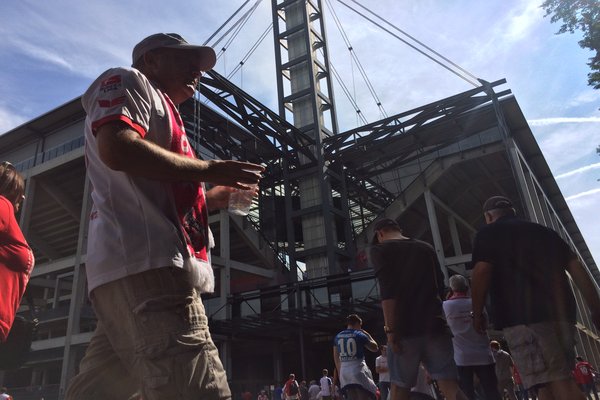 Having purchased a shiny new German mobile phone (they call it a “handy” over here…no, really), I rang Andreas up and I woke Andreas up. He’d be there in twenty minutes – enough time to find a quiet spot and field questions from my Grandma on what Germany was like.

“How is Angela Merkel doing with the German nation?” she enquired. “Is it true what Eileen down the road says about the Germans not having a sense of humour?” she wondered.

I begged to differ. “Everyone over here is great,” I said, as twenty metres away, one Hamburg fan relieved himself against the wall of the church opposite Boogaloo. As Grandma is the religious type, I chose not to bring that up.

Goodbyes said, back I went towards the bar. My “handy” buzzed. I headed towards a bearded figure who immediately thrust a Hamburg shirt and a ticket to the away end into my hand. This was Andreas, who then shoved a beer into the other hand before describing how supporting Hamburg was like a dysfunctional marriage.

“Every week your wife leaves you,” he said. “At the weekend she promises you that she’ll stay forever. And you love her and you trust her. And then she leaves you again on Monday.”

At Boogaloo in May, Andreas’s relationship with the club was tested once again. He’d celebrated wildly as Hamburg equalised in the last minute en route to defeating second division Karlsruhe. This however was in the Bundesliga relegation playoff – the second year in succession that Hamburg had been in the playoff and survived.

At the beginning of the 1980s, Hamburg won the Bundesliga twice and the European Cup to boot. Now they are a laughing stock, quite literally in the case of my German flatmates Chris and Fabian. Whenever Hamburg is mentioned, a titter or a guffaw usually follows soon after. Even Andreas admits it’s got comically bad.

“I don’t know what to think of it anymore. It’s like it’s run by Monty Python.”

He mentioned how the backpack of Peter Knäbel, the club’s sporting director, had turned up in a park a few weeks back. Inside was confidential information including details of players wages. Andreas’s support for Hamburg though is still unwavering. “We stick to the club and we believe that something comes around and things will get better.”

As we started heading towards the stadium, I tried to ask Andreas if they would win later that day against Cologne. I got four words into the question. No, was the answer. I had to give a similar response with the ticket in the away end, having fought to get a spot in the press box. The unexpected offer of a place in the away end made me wish I hadn’t. 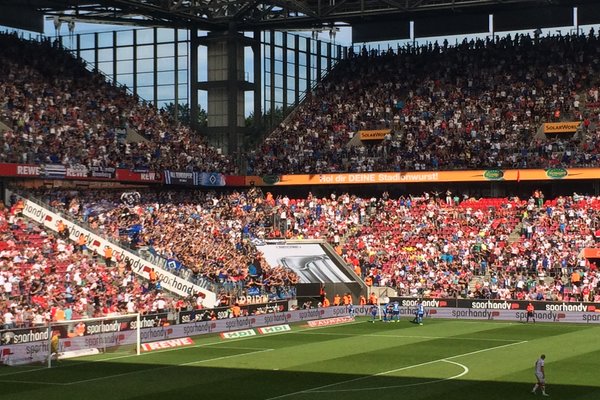 That feeling of regret doubled when Lewis Holtby gave Hamburg the lead two minutes into the second half and the away end bounced with glee. A deserved lead it was too. In fact, Hamburg had played well. As it stood, they were on their way to their second win in a row. Maybe a pain-relieving season of mid-table mediocrity was possible. I mean, how could Andreas have been so negative about their fortunes?

Around half an hour later, I wondered how I could have doubted someone as well heeled in Hamburg as Andreas.

Having not had a single shot in the first hour, Cologne equalised with just under fifteen minutes to go through substitute Philipp Hosiner. The most controversial moment of the weekend in the Bundesliga followed a couple of minutes later. Cologne’s Anthony Modeste raced into the penalty area, stumbled, lost control of the ball before being bundled into by Hamburg defender Emir Spahic. Referee Deniz Aytekin awarded a penalty and a red card to Spahic.

Even Cologne coach Peter Stoeger, speaking after the game, said that it didn’t look like a penalty to him. So of course, as this is Hamburg we’re talking about, Modeste tucked away his undeserved penalty to seal a 2-1 win for Cologne.

Hamburg were furious at full time. Coach Bruno Labbadia marched straight up to referee Deniz Aytekin to complain. Lewis Holtby was close behind and he told me after that Aytekin had cost them the game. 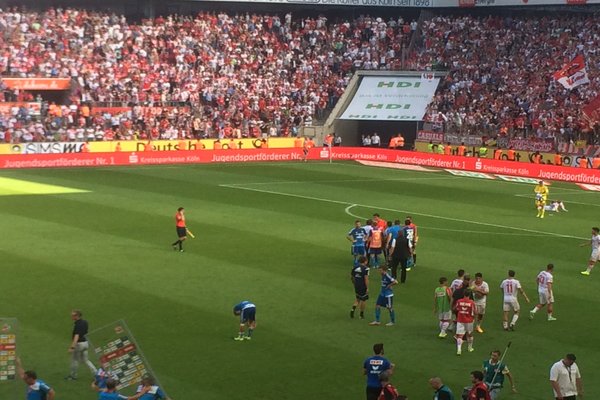 By the time I caught up with Andreas back at Boogaloo, he’d drunk enough not to care. In fact, he told me I looked a bit like Joey Barton. Which was nice, if a little confusing. It was time to go home. When I reached the flat, I took out the Hamburg shirt which Andreas had given me earlier, not just for the day, but to keep. Perhaps Hamburg’s fans don’t all have it in for me after all. 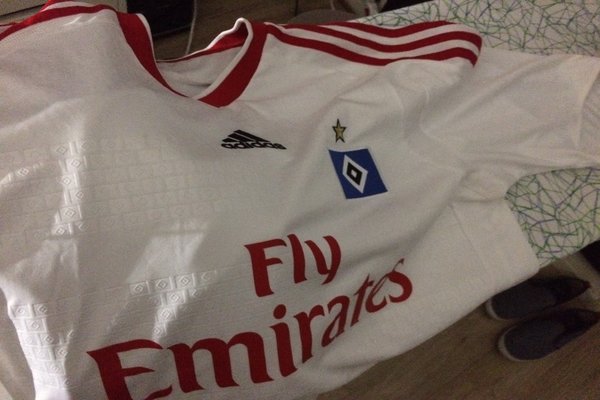