Nolberto Solano couldn’t quite believe it, but he had to say no. In the summer of 2005, with the transfer window winding down, the Peruvian took a call from his agent.

By then, he knew his destination. He was going back to Newcastle United, the club he loved but had to leave 18 months earlier after enduring frustration at St James’s Park under Sir Bobby Robson.

Solano had been at Aston Villa, where he was a firm fan favourite, winning the club’s Player of the Year after just six months at Villa Park. But home was calling him. Tyneside was where he felt settled most and he couldn’t resist the chance to go back.

A deal worth £1.5million, the same fee Villa had paid for him, was agreed. At the last minute, though, Liverpool made an offer and gave Solano the chance to move to Anfield, home of the reigning European champions.

“I was ready to go back to Newcastle, and my agent called to say I had a possibility to go to Liverpool,” he tells the Set Pieces, speaking via phone from Peru. “But I had already given my word that I’d move to Newcastle. I love the club and the city and that is why I didn’t change my mind.”

Solano’s exit in January 2004 was acrimonious; disillusionment had been bubbling away for months as he fell down the pecking order under Robson. Supporters were far from pleased to see him leave and, as it turned out, neither did senior members of the squad.

Alan Shearer, Shay Given and Steve Harper played a key role in engineering his second spell. He arrived on the same day as Michael Owen, who had signed for a club-record £16.5million from Real Madrid. As Owen was unveiled to a packed Sir John Hall Stand at St James’ Park, the crowd didn’t forget to sing Solano’s name.

“I never wanted to leave, but Bobby started to pull me out of the team. I was talking to him, asking what was going on. He was telling me the season was long and to be patient, but eventually I told my agent I wanted to leave to play football. David O’Leary gave me an opportunity and I went to Aston Villa where I had a good time.

“But Alan Shearer, Stevie Harper and Shay Given were telling me, ‘Nobby, you have to come back!’ Unfortunately Bobby had been sacked, so Graeme Souness rung me and it was nice to come back to the club.”

English football had been part of Solano’s life for seven years. Kenny Dalglish had brought him to Newcastle from Boca Juniors in 1998. Not much was known about him on these shores, but he had already made a name for himself in South America. After beginning his career in Peru with two successful stints at Sporting Cristal, sandwiching a short time at Deportivo Municipal, he moved to Boca in 1997.

Once there, he became a teammate with Argentina’s greatest footballing hero, Diego Maradona.

“It was a dream,” Solano recalls. “He was my idol and when my agent told me Boca were interested, I was very excited because they were one of the biggest clubs in the world. At the time, I didn’t realise Maradona would be part of the team and then he decided to come back.

“I never thought I would play with him, the only time I came across him was when I was playing for Peru and he was playing for Argentina. But it was unbelievable, he was a fantastic person and a great footballer as everyone knows.

“To me, he was amazing. After my debut with Boca, he gave me the best compliments in the press conference, saying how good I was technically and that Boca had signed a very good player. Maradona is famous in Argentina, his words mean a lot. He was very supportive in the beginning, a very happy man who gave me great advice.”

Newcastle won the race for his signature, despite reported interest from Arsenal. Solano says that playing in Europe was always an ambition of his.

“When my agent asked about playing in England, I was very happy. I always wanted to move to Europe. To be honest, I hadn’t watched much English football because it wasn’t very popular and South American players usually moved to Spain, Italy or Portugal because of the language and things like that.

“The rumour was Arsenal were interested, but I don’t know what happened there. Newcastle came and I said, ‘Yeah, of course’. I was always positive, arriving in the Premier League was a dream. It was tough in the beginning because I didn’t speak English and learning it in the North East was even more difficult.

“But I adapted quickly to Newcastle and to the league. The passion the fans had was amazing, English football was so organised and you can see now it is one of the best leagues in the world.

“Newcastle is a very warm city because the people love football so much. Every two weeks, they couldn’t wait to see their team. I was so impressed by that.” 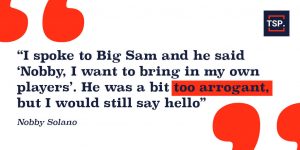 Cult-hero status at Newcastle was cemented on the pitch for Solano, but he soon became known for playing the trumpet. He still makes regular trips back to Tyneside, though not for a few years, where he is still known for being a member of the band The Geordie Latinos.

“I was playing trumpet in school when I was young,” he says. “When I moved to England, my neighbours were always playing music; the flute and the violin. So I asked if they could teach me how to play the trumpet and to read the music. That’s how it started, but I got bored playing at home by myself.

“In Newcastle, there was a salsa place and I knew some of the guys playing the music there. One is from Ecuador, another from Cuba, we got on well as friends. One day, we all said, ‘Why don’t we organise a salsa band?’. We started to take it a little more seriously and found the piano man, the base man and began rehearsals. It was only me who wasn’t a professional musician, the other guys were making their living from playing the music. We started The Geordie Latinos and I had a great time.

“The club didn’t know I was playing on the Sundays until we started advertising. It was Nobby Solano and The Geordie Latinos, so I was part of the marketing.”

Solano left Newcastle again in 2007 after the arrival of Sam Allardyce, who he describes as “arrogant”. It was to be the last time he pulled on the Magpies’ black-and-white shirt competitively.

“I spoke to him and he said, ‘Nobby, I’m not promising you anything, I want to bring my own people and my own players’. I said, ‘Thank you, fair enough’. He was a bit too arrogant, but I would still say hello to him now.”

West Ham was his destination for the 2007/08 season, before spells in Greece with Larissa, back in Peru with Universitario and at Leicester City, Hull City and Hartlepool United.

At Upton Park, Solano was reunited with some former Newcastle teammates, including Kieron Dyer, Craig Bellamy and Scott Parker. Nikos Dabizas persuaded him to move to Greece alongside Laurent Robert and Nigel Pearson, the former Magpies coach, instigated his switch to Leicester.

“It was a real coincidence, but it was nice to play with Kieron, Craig and Scott again. I liked West Ham, a good club with great fans,” Solano remisces. “But Alan Curbishley didn’t play me a lot and it was my last season in the Premier League.

“From there I went to Larissa with Nikos Dabizas for four or five months. He [Dabizas] made a phone call to me and Laurent Robert to convince us they were making a strong team and it’s a shame it didn’t last longer. Nigel Pearson gave me an opportunity at Leicester when they were going for promotion from the Championship.

“I tried to be a good guy and maintain these relationships. I’m still very much in contact with people in England now. My family, my girlfriend and my kids, are all English too.”

Retirement came in 2012 and Solano has moved into coaching. He has held managerial positions in Peruvian domestic football, but as of 2017 he has been assistant to national-team boss Ricardo Gareca and in charge of the under-23 side. He helped Peru reach the 2018 World Cup in Russia and spoke to us the day after a 4-2 defeat to Brazil in qualification for the 2022 tournament.

But aged 45, Solano harbours ambitions of working in England in the future.

“I’m really proud and very lucky to be working for my country again. I won 95 caps with Peru, but when I sit with the coaches, it is a great experience. To be honest, I miss the day-to-day, I’m a still quite young as a coach.

“If you ask me now, I say it’s a great opportunity but I would like to do the day-to-day in a club, preparing my team for the weekends and being back in that atmosphere. Unfortunately, I haven’t had any opportunities and that’s why I’m happy to carry on here in Peru.

“My head coach is a great manager and I’m learning so much from him. He’s an Argentine and very intelligent.

“My dream is to go back to England and coach over there if something comes up. I know it isn’t easy, because there are millions of managers like me but I hope somebody will trust me one day.”

So, would he be interested in taking over the Newcastle hot seat when Steve Bruce leaves his post?

“Well,” he laughs, “That would be nice. I need to carry on preparing myself. It isn’t that simple, especially at that level. I’ve been trying [for a job in England], but nothing has come up yet. It is even more difficult now I’m with the national team. If I was in England, I would get more chances but I’m waiting to see what happens in the future.”

Solano’s ties to Newcastle and England run deep. It’s difficult to see a future where the two won’t cross paths once again.